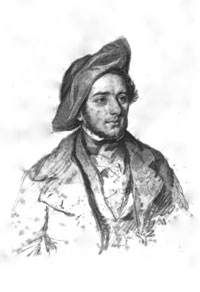 Okay, I feel I’ve extended Alexis Soyer week long enough (though I didn’t even get to the fountain in his Universal Symposium where a living Ondine frolicked among jets of curaçao, maraschino, and liqueur d’ amour), even though this sadly-not-as-well-known-as-he-should-be chef, bon vivant, celebrity, inventor, and philanthropist deserves much more. You’ll just need to get out there and read Relish by Ruth Cowen and then help me spread the Soyer mythology around. Most of the quotes from the book that I’ve reproduced here have a drinky angle, as you might expect on a blog called Spiked Punch. But for this final quote, I wanted to dish up a tasty food number, and have decided on a quote that details one of his famous menus from his days as head of the Reform Club’s kitchen. It seemed a fitting end, as Soyer definitely like the big productions. This one was a dinner in honor of Imbrahim Pasha, the regent of Egypt.

The meal began, according to custom, with a selection of exquisite soups–considered by all epicures to be the essential health-giving aperitifs of any great dinner. They included consommés such as Potage à la Victoria, a delicate veal broth garnished with blanched cockscombs; Potage à la Colbert, a vegetable soup flavored by glazed Jerusalem artichokes laboriously cut into pea-sized balls, and Potage à la Comte de Paris, a sherry-colored, intensely flavoured meat soup filled with macaroni ribbons and delicate chicken quenelles. As the tureens were cleared, and as the noise levels rose to compete with the band, the members moved on to the most delicate dishes, the hot fish. Turbot à la Mazarin, light poached and served with a delicately beautiful pink cream sauce made with butter and lobster roes; pan-fried trout in a sherry sauce; a pyramid of whitings, deep friend and served à la Egyptienne in tribute to the guest of honor, and wild salmon from the river Severin–which Alexis considered the very best–line caught that morning and brought in on the afternoon train, to be pounced on by the kitchen staff and immediately scraped, gutted, washed, and prepared in a simple cream gratin.  Then came the dishes for the main service, carefully arranged on the crisp white damask cloths–two, four, or six platters of each item laid out in perfect symmetry. These included a choice of róts, such as young, tender turkeys, no bigger than chickens, their necks skinned but heads left intact, tucked under their wings. There were also hares in a red-currant sauce, capons with watercress, plump white ducklings, spit-roasted and served with the juice of sour bigarade oranges. The first relevés were also waiting: an almighty baron of beef; haunches of mutton roasted à la Soyer and saddle of lamb à la Sévigné, served with veal quenelles, stewed cucumbers, and asparagus puree. There were also more elaborate removes, such as Chapons à la Nelson, a complex dish which involved gluing truffle- and mushroom-stuffed capons into pastry croustades shaped like the prow of a ship–complete with sails, portholes, and anchor–and fixing them into waves of mashed potatoes. Soyer adored these elaborate culinary trompes l’oeil, and at the same banquet produced for the first time his Poulardes en Diadem, this the time pastry croustade resembling a jeweled crown, stuffed with roasted chickens, boiled ox tongues, and glazed sweetbreads. He adorned them with attelettes–another Soyer innovation–newly commissioned gold and silver skewers with carved tops representing fantastical animals, birds, shells, and knight helmets. The attelettes, or hatelets as the popular electroplated copies were called, were the equivalents of culinary jewelry, and would be strung with crawfish, truffles, and quenelles before being stuck into the dish as the ultimate sparkling garnish.

Okay, that’s only about half of this dinner. But what a half! To get the full menu (and to read the full story of Soyer), pick up or download Relish. And give a toast to Soyer!

In our first Alexis Soyer Cocktail Talk post, I talked more about the celebrated (though not celebrated enough today) celebrity chef, bon vivant, and charitable Frenchman who lived in London in the mid-1800s. And about the worthy and needed biography of him by Ruth Cowen, called Relish, which I just read and liked lots. The following quotes are from said book, as are those in the other Soyer posts, in hopes that I can spread the Soyer legend around (as well as convince you to search out more about him). Here are more quotes to give you any idea of Soyer, starting with two about Soyer’s Nectar, a branded drink he came up with that was a bubbly-lemon-cinnamon mix that happened to be blue–he was a bit colorful, after all.

He did not have to wait long for yet another bundle of ecstatic reviews. On 13 July The Sun declared: ‘It beats all the lemonade, orangeade, citronade, soda-water, sherry-cobbler, sherbet, Carrara-water, Seltzer, or Vichy-water we ever tasted.” The Globe dubbed Soyer the ‘Emperor of the Kitchen,’ and duly recommended the addition of a tot of rum.

The Nectar was particularly popular as a mixer, and Alexis, who with some justification could be called the pioneer of the English cocktail, published a variety of recipes for ‘Nectar Cobblers’ and other glamorous boozy compounds.

Cowen’s Soyer biography is packed with descriptions of the almost impossible to believe dinners he made, sometimes for groups by the hundreds and thousands. Whenever, going forward, I hear people talk about their decandent dinners, I’ll laugh and point them to Relish. The following quote is part of one of the more restrained meals in the book, one Soyer created for the Grand Dinner of the Royal Agricultural Society festival:

The bill of fare included–on top of a whole Baron and Saddleback of Beef à la Magna Charta–33 dishes of ribs of beef, 35 dishes of roast lamb, 99 galantines of veal, 29 dishes of ham, 69 dishes of pressed beef, two rounds of beef  à la Garrick, 264 dishes of chicken, 33 raised French pies à la Soyer, 198 dishes of mayonnaise salad, 264 fruit tarts, and 198 dishes of hot potatoes. It also included 33 Exeter puddings, which Soyer had invented especially for the occasion. There were essentially an alcohol-steeped reworking of his boiled Plum Bolster, for which, in The Modern Housewife, he had applied the alternative name of ‘Spotted Dick’ for the first time in an English cookbook. They were big, rich, doughy balls of suet and sugar, to which Alexis added rum and ratafias and then smothered with a sweet, shining blackcurrant and sherry sauce. 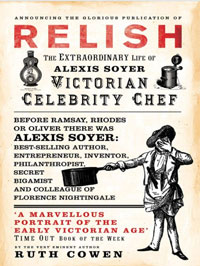