It’s funny (to me, if no-one else) to have a very tough drink name like “Fugger’s Revenge” for a light-bodied, friendly, vermouthy (in a way, though I’m not calling this vermouth, cause I don’t want the vermouth board after me), aperitif-style sipper (the aperitif board is much less ferocious). But the backstory really is not so tough, but is one of my fav wine stories (one that some people say isn’t true, is just apocryphal, etc. Some people are also fuddy-duddies and no fun to have a drink with. Avoid them). Anyway, it starts early in the year 1111. A forward-thinking German bishop named Johann Fugger was getting ready to travel to Rome for the Holy Roman Emperor’s coronation (this one was Henry V). Because he was forward-thinking, Fugger sent his assistant along the road first, to scope out the local wine, chalking the pubs or bars or 12th-century what-have-yous that had good wine with the word “est,” which is Latin for “there is” (the full phrase he kept in his wine journal was I believe “vinum est bonum” or “wine is good” basically). When this intrepid wine scout came into the town of Montefiascone, he so enjoyed the wines that he A: had a lot, and B: wrote Est! Est!! Est!!! on the bar’s outside wall to show his enthusiasm. I believe bishop Fugger himself liked these particular wines so well he never made it to the coronation, just stayed in Montefiascone drinking wine, and is buried there today. And, the white wines designated Est! Est!! Est!!! di Montefiascone are still made and enjoyed. And (here’s where it also comes back around), this particular homemade aperitif uses an Est! Est!! Est!!! di Montefiascone wine as it’s base! Neat! Awesome! Story! 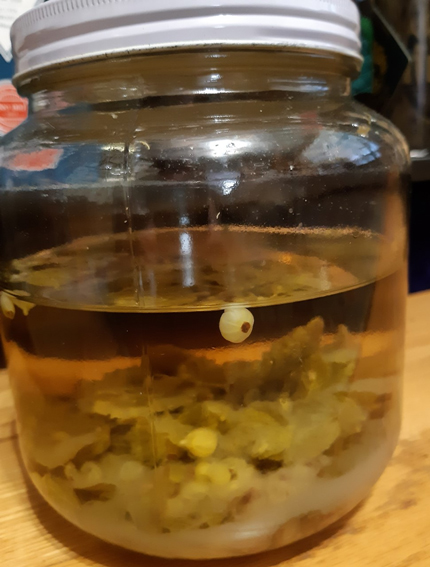 There aren’t a wide range of these whites available here, but Pietro Est! Est!! Est!!! tends to be available, and it’s what I used. Light, apple-y, dry, and very refreshing, it provided the perfect platform for building this summertime aperitif (and it won’t set you back too much). The other flavorings almost all came from my yard, including white currants (want to know way more about my white currant bush? Check out the Currant Current liqueur, Strawcurranterry, a white currant strawberry liqueur, and A Particular Friend, a white currant mint number), fresh mint, and fresh marjoram. A little gentian root because life is bitter (but not, one hopes too bitter most days), a little vodka to im-proof things a bit (but not too much, as this is a very light-on-its-feet charmer), and a little simple syrup to round our edges without making it sweet. Altogether, this late summer aperitif rises to the level of the wine story with delicate herbal and fruit notes. Pretty swell on its own, chilled or over ice, but also a pleasant pal in cocktails (heck, though it is not a vermouth, it would make a mean Martini-esque drink when paired with a London-style gin). 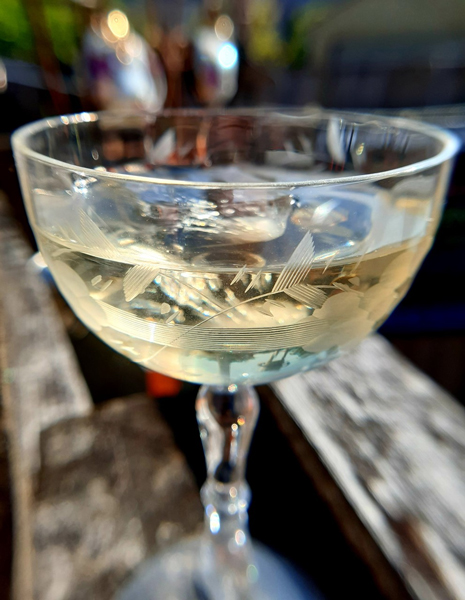 1. Add the currants, mint, gentian, and marjoram to a large glass jar with a good lid. Muddle well, but not wackily (you do want to break up the currants as much as possible).

2. Add the wine and vodka, and stir. Put in a cool dry place and let sit for two weeks, swirling regularly.

3. Open up the jar of joy and add the simple syrup. Stir again, and re-place in that cool dry place. Let sit two more weeks, swirling as you will.

4. Strain – I like to strain once through a fine mesh strainer, then twice (or as needed) through cheesecloth – into a good glass bottle. Store in the fridge (to keep nice and chilled).