“And all shall be well and
All manner of thing shall be well
When the tongues of flames are in-folded
Into the crowned knot of fire
And the fire and the rose are one.”

It is a wild historical fact which I’ve uncovered, as well as just some wild genius, that T.S. Eliot, years ago, wrote a poem (Little Gidding, part of Four Quartets) about this drink that I invented just weeks or months ago. I mean, looking into the future that way is phenomenal! And the drink in itself is fairly phenomenal (I say, humbly) as it mixes together a few ingredients that you might not have thought went together: rosé wine and tequila (which of course is made with fire in a way). But they do! As Eliot predicted. Amazing. Not sure how the other two ingredients tie into the poem, but I feel that’s my fault, not being great at literary criticism. Oh, those other two ingredients include Bluewater’s lovely, and limited (so come out here and get when you can), tantalizing floral and spice Cardamon Elderflower liqueur, and the also lovely Carpano Bianco vermouth, which has a delicate wine, citrus-and-other-fruit, springtime botanical nature. Really, this is a pretty poetic drink all told! Try it, while reading the poem, and see if you agree. And if you don’t, take it up with Eliot. 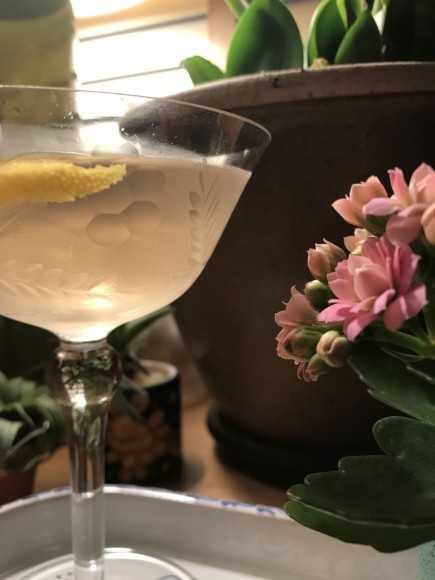 1. Fill a cocktail shaker or mixing glass halfway full with cracked ice. Add our four core lines (or boozes, that is). Stir well.

2. Strain into a cocktail glass, garnish with the twist, and get your poetry going.

Let’s have one more from the fine three-novels-in-one-book Fletcher Flora collection from Stark House. We’ve had quotes from the first two books in there (check out all of the Fletcher Flora Cocktail Talks to see those – and more!), and to bring things all full circle and such, wanted to have one from the last book, Take Me Home. While it was probably my least favorite of the three, it, like the others especially when taken all together, shows the versatility and reach of Flora. Take Me Home is definitely still a good read, just leaning more towards noir-ish slice of life of a few characters in, if not desperate, awfully close, states. As opposed to the more mystery-side, or crime side, of the first two books. And the below quote about port is one no-one wants to miss.

“Dark port would be nice,” she said. “It’s not so dry as some of the others, and besides, it’s stronger than most of them.”
“You mean it has more alcohol?”
“Yes. Port has around twenty per cent and most of the dry wines have only twelve or fourteen.”
“That’s a good thing to know. I’ll remember that.”
“Oh yes. Port is six or eight percent stronger.”
“A bottle of dark port, please” Henry said to the clerk.

Another choice read and Cocktail Talk from George Simenon and my pal (well, it almost feels like it now – check out the past Maigret Cocktail Talks) Inspector Maigret. This read, Lock 14, that is, takes place as you might expect at a lock, and not only is it a regular atmospheric mighty Maigret mystery, but it’s also an interesting look into how commerce and people operated along the lock series and system at the time (for example, I had no idea how many barges were pulled along by horses that were kept on board, with their “carter” who led them and took care of them), and the bars that sprung up alongside the locks. The below is a good little look into one.

The lockkeeper accompanied his relations as far as the main road to Epernay, which crossed the canal two miles from the lock.

He saw nothing unusual. As he was passing the Café la Marine on his way back, he looked inside and was hailed by a pilot.

He had a rum, still standing. Two carters got to their feet, sluggish with red wine, their eyes shining, and made for the stable adjoining the café, where they slept on the straw next to their horses.

They were not exactly drunk. But they had had enough wine to send them into a heavy sleep.

Sometimes a book’s title says enough – enough to make me pick it up, at least, as is the case here. I mean, Hot Summer, Cold Murder is an amazing title. Amazing! Add to the fact that this book was written by Gaylord Dold, who I’ve never read before but who is a pal of a pal of my mom (or something like that), and that my very mom gave me this book, and, well, I was excited to read it. And it was a good, solid read, with a down-on-his-luck, muscatel-swilling P.I., a mystery and (as the title tells us) a murder, a lot of double-dealing and shady-at-best characters and cops, alluring and dangerous ladies, and more, all happening in Wichita! Amazing, as I’ve said. It’s a little in the hard-boiled tradition, but has a 70s-mystery vibe too, while taking place in the 60s I believe, and published in the 80s. Worth tracking down if you’re intrigued (and if the above doesn’t intrigue you, then you should check your pulse) – and I haven’t even mentioned the Cocktail Talk-ing, like the below:

In the same twenty minutes one beat-up Plymouth cruised past on Lincoln Street and no-one went into the barbershop next door. When it was that hot and dead I always drank sweet muscatel, and when it got bad enough I thought about my ex-wife Linda. After five years, the memories never got any better.

What I’m Drinking: Such Animals of Summer

Why, just last week, here on the Spiked Punch blog, I had a delicious summer drink (if I can say that humbly) called Pina’s Potion, which used Les Dauphins Côtes du Rhône Réserve rosé – a bottle of which had shown up via the post. If you haven’t checked that recipe out, you’re in for a treat! Go read about rose cocktail Pina’s Potion now, to learn a bit more about Les Dauphins Côtes du Rhône Réserve rosé and to make your summer better.

Back? Yay! Well, I liked this rosé so much, that I wanted to go down another road with it, because the flavor profile gives lots of avenues one could travel, all different, like every animal is different. To prove this furry point, I give you another rosé cocktail, called Such Animals of Summer. A slightly different (as mentioned) mix, it mingles our rose with another summertime treat, Washington state-based Sidetrack Distillery’s Strawberry Liqueur (they grow the strawberries right on their farm! dreamy), and another French friend for our French rosé, Dolin’s Blanc vermouth, a refreshing, citrusy, teensily sweet number. All together a light, flavorful, cocktail that’s ideal as the summer night approaches. 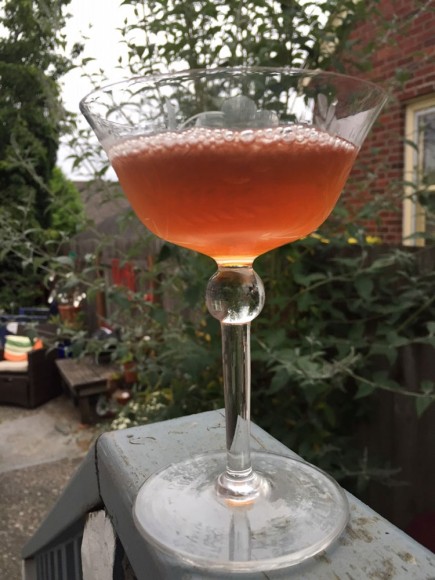 Such Animals of Summer

2. Strain into a cocktail glass. Enjoy the moment.