What I’m Drinking: Work By Lamplight

I must admit (or partially at least), I stole this title from Ed (the best poet in the world) Skoog. Or think I did, as I had his latest book Travelers Leaving for the City next to me when I was trying to come up with a title for a new drink I’d made, and so I picked up his book and randomly opened it up, and picked the first phrase I saw, but then my mind wandered, as it does, for a moment, and “Work By Lamplight” was what I remembered when fingers finally met keyboard.

And, you know what, it works well, as, though this tipple could be tipped earlier in the day, I feel it’s best later in the hours, after dinner. It can serve, in a way, as your after-dinner coffee and a dessert all in one glass. How, you ask? It starts with Tia Maria, a newly-designed bottle of which showed up neatly packaged on the porch recently (I know, I’m lucky!), and which reminded me of how it’s made with 100% Arabica coffee beans and Madagascar vanilla on a base of Jamaican rum, and in the popular cold brew method. That’s good, yes? Yes! It’s a touch sweet (but so am I), but the coffee-ness comes through smoothly and it melts on the tongue in a swell way. And coffee goes with more other bottled beauties than people give it credit for. Tequila, for example, which is the base for this cocktail, goes deliciously with coffee. In some ways, those two together in the right ratios might be okay all by their paired-ness, but we want better than okay, right? Right! So, in come two delights near-and-dear to all good drinker’s hearts. First up, Pierre Ferrand’s orange curaçao, which bring what you think of curaçao to another level in the same way this drink brings what you think of coffee cocktails to another level (if I may be so bold). And then, Scrappy’s Chocolate bitters, which utilizes organic toasted cacao nibs to add chocolate and herbal notes, without which the drink would feel ridiculously underdressed. And then, a mandarin orange twist, whose citrus oils cut the sweetness charmingly. Altogether, a layered number you’ll want to sip slowly as the evening turns. If you want to read poems while drinking, all the better.

1. Fill a mixing glass or cocktail shaker halfway full of cracked ice. Add all but the twist. Stir well, but be mellow about it, cause it’s the evening.

2. Strain into a cocktail glass. Garnish with the mandarin twist (if you only have a non-mandarin orange, that’s dandy, too).

I thought about having just one Cocktail Talk from this mighty book, just because it seemed fitting, and I did go on a tiny bit – heck, go read The Way We Live Now, Part I, Cocktail Talk and see what I mean. Good, you’re back. However, when thinking on it, I decided I wanted another. Because this other has such a good line about curaçao, that I had to spread it around. The characters here aren’t main characters per se (though the book is big and vast enough in its ambitions and scope that there are many important characters), but they are important, and this scene, near the end, shows them grabbing a little deserved happiness, and some welcoming curaçao.

She and Herr Croll had known each other for a great many years, and were, she thought, of about the same age. Croll had some money saved. She had, at any rate, her jewels, — and Croll would probably be able to get some portion of all that money, which ought to be hers, if his affairs were made to be identical with her own. So she smiled upon Croll, and whispered to him; and when she had given Croll two glasses of Curaçao, — which comforter she kept in her own hands, as safeguarded almost as the jewels, — then Croll understood her.

I probably don’t need to reiterate my love for English writer Anthony Trollope, but what the heck – I love me some Trollope. I’ve nearly, nearly, read all of his books (well, I’m still missing a few, but I’ve done a fair job and am hunting out the few that I’m missing), and re-read a ton, too. But somehow, the first time I read Doctor Thorne (one of the Chronicles of Barset), I skipped, or read but then forgot about, the below quote. Which is, admittedly, a quote about a character who has a serious probably with the drink. But still! It mentions some bottles that continue to be favorites today, including one thing that’s being in made in Seattle after a long absence by the Old Ballard Liquor Co. See if you can figure out which one!

His father had killed himself with brandy; the son, more elevated in his tastes, was doing the same thing with curaçao, maraschino, and cherry-bounce.

Cocktail Talk, A Party for the Girls, The Compleat Imbiber

A few posts ago, I talked about my recent purchase of The Compleat Imbiber #5, and said there’d be more to come from it – and I didn’t lie, because now here we are and have another delightful Cocktail Talk quote straight from that august compendium. This particular one is from a story called A Party for the Girls, by H.E. Bates, in which a hero is tasked with making a Moselle Cup, but he can’t quite remember how it goes. So, foraging his path via experimentation, he ends up with a drink that ends up being “genius.” Sometimes it takes a little luck . . .

‘You said mint. What about mint now? Shall I go and get it? We’ve got lemon mint, too, I think’

Horace, who was trying hard to remember the exact proportions of the cup’s ingredients, put a dozen cubes of ice in a jug and coloured them with a golden film of brandy. Hesitant about something, he stood biting his lip. Oughtn’t there to be a dash or two of curaçao? Something seemed to tell him so.

‘You haven’t a spot of curaçao, I suppose?’

No, but they had maraschino, Maude said, and she thought also a little Cointreau. By now Horace was mildly confused. He couldn’t remember for the life of him whether it was curaçao, Cointreau, or maraschino that the cup demanded and again he stood biting his lip with that shy perplexity that affected Maude far more sharply than any look of open appeal.

–H.E. Bates, A Party for the Girls, The Compleat Imbiber 5

Much like Mr. Sponge himself, the Sporting Tour has lounged around the Spiked Punch couches and guest rooms and breakfast buffets for awhile (read the first Mr. Sponge Cocktail Talk post here for more background), but we need one or two more quotes to round out the experience. And the following, dear reader, are them:

He exclaimed in a most open-hearted air, ‘Well, now, what shall we have to drink?’ adding, ‘You smoke of course–shall it be gin, rum, or Hollands–Hollands, rum, or gin?’

‘O! Liquor them well, and send them home to their mammas,’ suggested Captain Bouncey, who was all for the drink. ‘But they won’t take their (hiccup),’ replied Sir Harry, holding up a Curaçao bottle to show how little had disappeared.’ ‘Try them with cherry brandy,’ suggested Captain Seedeybuck, adding ‘it’s sweeter.’

Cocktail Talk: A Coffin for Dimitrios

Isn’t the name here ominous? Well, the book, by Eric Ambler, is less so, though Dimitrios is a rough character. This mystery-international-intrigue novel actually isn’t as cliff-hanger-ish as it wants to be, but it does globe trot across some interesting southern-European, Northern African, Easter European locales, and they drink it up somewhat along the way, which I have no problem with—heck, I don’t even have too much problem with the lack of mystery, as long the scenery is so jumping. Here are two quotes that round out this book’s particular bar:

‘Will you have a drink?’ said Latner. The Russian’s eyes flickered open and he looked round like a man regaining consciousness. He said: ‘If you like. I will have an absinthe please. Avec de la glace*.’

She had had a Mandarine Curaçao in front of her and now she had drunk it down thirstily. Latiner had cleared his throat.

—A Coffin for Dimitrios, Eric Ambler

*If you wondered, this means “with some ice.”

A drink I picked up from the classic Savoy Cocktail Book, the Oriental has become a reliable mid-week (or weekend) hit for me, making me giddy every time I take that first sip, with its balanced nature and life-saving qualities. Oh, if you don’t know, as the Savoy tells it, “In August, 1924, an American engineer nearly died of fever in the Philippines and only the extraordinary devotion of Doctor B. saved his life. As an act of gratitude, the engineer gave Doctor B. the recipe of this cocktail (the Oriental).” Hence the life-saving nature of this drink. And, isn’t it always good when a drink comes with a built-in story, to start off those bar conversations that are so memorable (if a bit hazy in hindsight here and there). I love it. If you ever want to impress that certain someone, or just goof it with pals while soaking in the pleasures of being off work for a while, then the Oriental is a good drink to order up or make up and swill up. 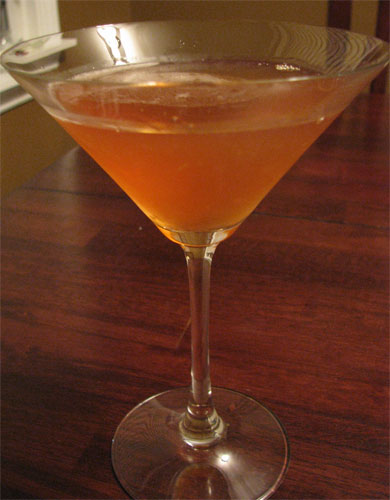 It doesn’t hurt if you can embellish the story a bit as well. Lead up to the fever by giving the engineer a little more history (maybe he’s your uncle? maybe he was building a bridge to save a village from extinction? maybe he wears a jaunty hat?), and bring in the jungles of the Philippines, and then the engineer slowly succumbing to the fever, with the mosquitoes buzzing around his head like little planes around King Kong, and the lights getting dimmer, and dimmer, and dimmer, the darkness creeping and the fever rising and our brave engineer (who looks a bit like George Clooney) descending into his fate . . . and then the tent flaps rise and the mysterious Doctor B walks in, surrounded by sunlight. Cut to the next scene where the engineer is making the Doctor the Oriental for the first time, and then sliding the recipe across the table as the Doctor’s eye’s gleam with thankfulness (he’s on his third Oriental by now, and the gleam is partially backed by that third round). It’s enough to make you tear up a bit. Or is that tear just because you’ve been waiting to get the recipe for so long? The following is how I make them. I tried experimenting with different orange liqueurs and such, but kept coming back to that basic curaçao, which isn’t quite as sweet (and the drink can be a tad sweet for some anyway, so it’s good to keep a handle on it). Be careful with the lime juice pour as well, as it tends to want to take over (those fresh juices are always a little, well, fresh). I even experimented with subbing in Aperol (that invigorating Italian afternooner) for the curaçao one time, and while it wasn’t a bad drink, it was different enough to where it was actually a different drink. But fun to play with.

1. Fill a cocktail shaker half way with ice. Add everything. Shake well.