What I’m Drinking: The Deluxe SSB 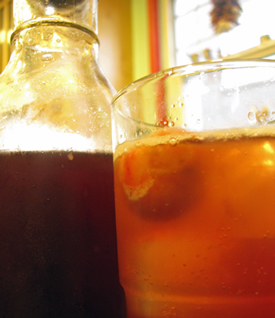 In the Earl of 15th Avenue cocktail post below, I talked a bit about how I was lucky enough to be mixing with a Deluxe Foods syrup not yet widely available. Then I apologized for it. And now I’m apologizing again, because in the drink we’re sipping today, the main (really) ingredient is another of those Deluxe syrups, this time strawberry. And, to keep the apologies flowing, let me apologize for putting a drink sans alcohol on a booze blog. What kind of a creep am I anyway? But sometimes a summer refresher needs to be light, and light on alcohol, and sometimes even without alcohol altogether. Which is how the Deluxe SSB rolls. But its dry-ish strawberry goodness more than makes up for it and will cool you down on a day when the Mercury has risen to the tops of the thermometer. Oh, and keep checking the Deluxe Foods farmer’s market stands for syrups–you never know when you’ll get lucky.

2. Fill the glass almost to the top with club soda. Stir well, and garnish with the cherry.

A Note: Rainier cherry deficient? Sub in a second type and only cry a little.

A Second Note: Feel this has to have a alcohol component? Add an ounce of gin to the glass in step one. Gin and strawberries are a yummy combo. 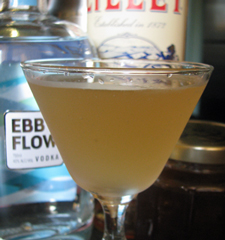