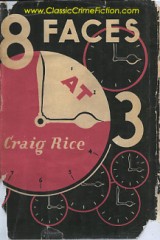 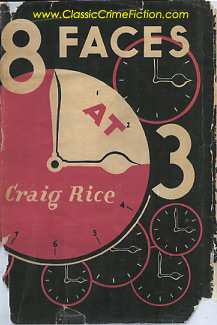 I’ll admit freely that I am not a very social-media-y person. Maybe it’s age, maybe inclination, maybe I type too slowly, maybe it’s a curse put on me by an ancient sorcerer, who knows? However, I will say that at least one awesome thing has happened for me via the socials (I’m sure many things, but that’s not as dramatic), and that was when someone on the twitters pointed me towards the author Craig Rice and the book Eight Faces at Three. I believe it was mystery author and cool cocktailer (author of Down the Hatch: One Man’s One Year Odyssey Through Classic Cocktail Recipes and Lore) and noir-ish editor (typing all that out, I’m sorta jealous I’m not him!), Vince Keenan. I didn’t know Rice at all before this pointing, and that was a big failing I’m now happy to say I’ve corrected. Rice (full name something like Georgiana Ann Randolph Craig Rice) lived a bit of a wild, early-to-mid 1900s life, and that’s saying something. Not only married many times (including to a beat poet, of all things), a cocktail and booze-swirler and swigger during some rollicking periods in history, a mystery book writer and ghostwriter, and the first crime-etc. writer to be featured on the cover of Time magazine, when Time was a bigger deal than we can probably really grasp – I mean, that’s huge!  – she was also (I as I read when trying to track down more info, and which I loved so much I wanted to type out), described by Bill Ruehlmann as “the Dorothy Parker of detective fiction: she wrote the binge and lived the hangover.” Wowza!

Of course, none of it would matter as much if Eight Faces at Three wasn’t all kinds of fun to read! It starts a wee bit slow, but once murder happens, and a (perhaps wrongly accused?) suspect suspected, and (most of all) said suspect’s pal, the tipsy debutante Helen Brand arrives and decides to solve things with press agent (and also tipsy) Jake Justus, well, the fun starts rolling at speed. They’re accompanied (into bars, cars, and bottles) by defense council John J. Malone, which means this book kicks off the John J. Malone series of Rice books, and while he’s a hoot, I hope in other books our other two named imbibers also show, cause they have a madcap 20s romance vibe that was all kinds of kicks. And they cocktail a lot! As well as open bottles, as in the below quote (which doesn’t specific a spirit, but I’m taking it to be rye, as that seems their tipple of choice).

She laughed. “Reach into the side pocket. No – this side. I thought it might be a long, cold ride into town.”

Jake beamed approvingly at her. “There’s a certain Florence Nightingale touch about you that’s beginning to grow on me.”

She laughed again. “No glasses though.”

“Well,” he said, “you couldn’t have everything. It wouldn’t be fair”

He passed the bottle to her, watched admiringly as she tilted it up and drank deeply without allowing the big car to waver more than a little on the icy pavement.