Another from our series of Maigret Cocktail Talk posts featuring famous stoic, tall, Parisian Inspector Maigret, created by the celebrated author Georges Simenon, who wrote said Inspector as one who is not shy about having a sip of something boozy here and there. Even when he’s in retirement and not an Inspector (well, really, he’ll always be the tops to his past police pals, and the world at large, which is how he gets involved in this particular post-police case, which a matriarch of a family brings him in to look over a supposed suicide — it’s a sort-of extra long story, which I read in the Maigret’s Christmas collection) at all. Also, he still has some drinks. Including some kümmel with the landlady of a very down-in-the-mouth hotel he is staying at.

“I wouldn’t mind a glass of something,” he had said, sitting down or rather straddling a chair beside her. “What about you Madame Jeanne. What will you take?”

“Nothing, Monsieur. I’d better not drink. Everything upsets me.”

“A tiny drop of liquor?”

“Well, just to keep you company … some kümmel, then. Will you help yourself? The bottles are on the shelf. My legs are so terribly swollen this evening.

Kümmel was her tipple then. And he, too, had drunk kümmel out of politeness. It had left him still feeling queasy. He vowed never to touch a drop of kümmel again in his life.

What I’m Drinking: The Stomach Reviver

A classic cure for gastronomical distress, I’ve featured this favorite on the Spiked Punch blog before. But as it’s such a fine remedy for curing your post-holiday internal ills, and as one or two of you may have missed the earlier post, here it is again, starting your new year off in a fine, tasty, gut-happy way. 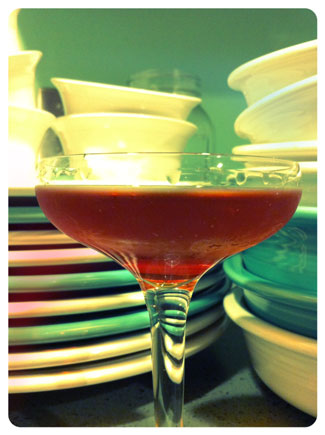 The Stomach Reviver Cocktail: In Case You Stuff Yourself This Weekend

It’s a holiday weekend, and you wanna get to it (hopefully yours starts on Friday, like mine), and I wanna get to it, but before then, I wanna drop a quick bit of holiday party science on you. You’re gonna eat too much this weekend (I’m also going for as many “nna” words a possible), but don’t wanna feel like the Blob (the fatty super villain, not the bubbly asteroid spin off). Which is why you should have the fixin’s for a Stomach Reviver on hand, cause it’ll cure your aching tummy, and let you have more fun-na. It goes like this:

1. Fill a cocktail shaker half way with ice cubes. Add everything. Shake, strain into a cocktail glass or straight down the ol’ feed hole. 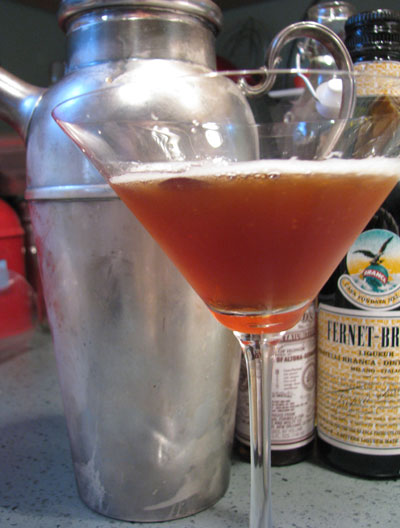 It’s the double bitters (FB and Peychaud’s) I believe, that alleviates that over-full feeling. At least it did for me the other night, after I’d consumed like six pieces of pizza, some salad, a few bread sticks, and probably some ice cream. Who can remember everything? Anyway, I was out of Kümmel (that caraway-and-sometimes-fennel-flavored treat), and so used homemade fennel liqueur, and it went down like a good date gone south. Wait, that sounded bad. I meant that it was really a touch sweet (but not too much) on the front end, and then a touch bitter at the end. I like that. You should too. If you don’t have Kümmel, play around with subbing in another sweetish spiced liqueur, and let me know how it treated you, and what you’re gonna call it (besides wonderful relief, that is).

PS: Check out that rad antique’y shaker I picked up not long ago. It pours like a little teapot. That got tall.