In the recent U.K. Drinks Part I post, I talked about drinking ales at Cornwall pubs, and how lovely it was. But I also spent a little time in a town I like to call Londinius (or Matt Berry likes to call it that, and I imitate him), and had some swell drinks there, too. The swellest though, and what I’m devoting this post too, were at a bar with no name that resides at 69 Colbrooke Row (and, funny enough, the check actually says “The Bar With No Name”). It’s a well-known spot, thanks to the bartending and chemistry of renowned shaker Tony Conigliaro, whose book The Cocktail Lab: Unraveling the Mysteries of Flavor and Aroma in Drink, with Recipes, recently came out. You should buy it, if you’re at all interested in cocktails. And why would you be here if you weren’t? Anywho, I’d always wanted to visit said bar, and was stoked to finally get there. I started with a drink called Terroir, which is a word I can’t pronounce. It’s also a straight spirit they distill at the “lab” up the street – distill from clay, lichen, and flint! Really. 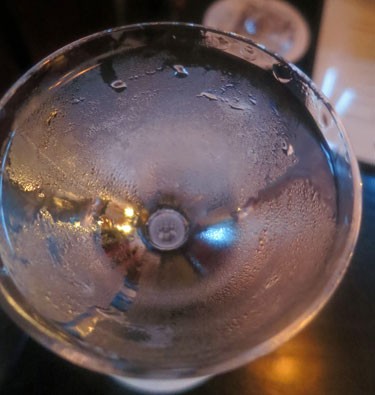 If you see a drink on a menu that’s a distillate of clay, lichen, and flint, how can you get anything else? You can’t. It comes poured at the table straight from the bottle, 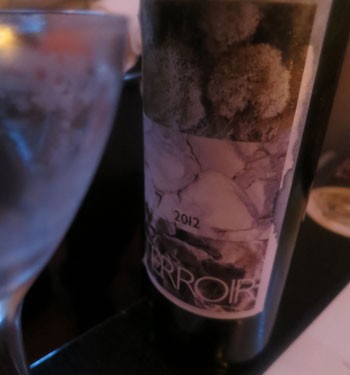 and was delicious, slightly sweet, even, with earth tones, as you’d expect, and undercurrents of the air you smell when roaming the hills of France. From there, I went to the Avignon, on the server’s suggestion (more about said server in a minute). It was a combo of Merlot Cognac, Chamomile syrup, and smoked Frankincense. I kid you not! It had an amazing complex smokiness that started with the glass itself – turns out, they smoke the glass, too, in some mad scientist machine at the lab. The drink had layers of smoke and smelled, almost as if you were drinking from a chasuble. 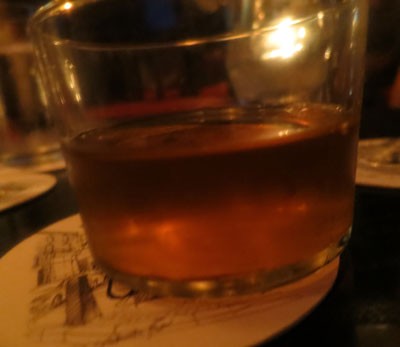 At this point (and after Nat had a few drinks, which I’m not detailing cause really then you’d know the whole menu and not want to visit the bar yourself, which you should. So I’m leaving you with a bit of mystery) I wanted something a bit more umphy, as both the early drinks, while awesome, had sweeter notions. After talking it through with our server (hold on, more on him in a sec), he suggested an old favorite I hadn’t had in years, the Remember the Maine. A perfect idea! It’s like a Manhattan jagged with absinthe more-or-less, and fell right into place. Sadly, I was having too much fun to take a picture.

But that wasn’t it (and no, we weren’t stumbling – we were there a while, and the drinks were well-sized, meaning not like buckets). On the advice of that same server, and actually on the dime of that server, as he bought us this last drink, we had the Prairie Oyster shot. Now, don’t faint (if you know I’m a veg, that is. If you don’t, now you do). There wasn’t a real oyster involved. What was involved was cool as heck, and I’m going to try and describe it, but not do it justice. But here goes. They take tomato water and herbs, and place it into a handmade mold that looks like an oyster, then immerse it in a chemical solution that makes the outer layer form into a “skin” of sorts, and the whole thing look oysterish. Then they place it into a custom-made ceramic “shell” and top it with house pepper vodka and some other goodness. Then you shoot it. When you take a bite (which I suggest) of the tomato “yolk” or “oyster” it bursts with this fantastic rush of vegetal-ness, herb and spice, and pepper. It’s yummy. 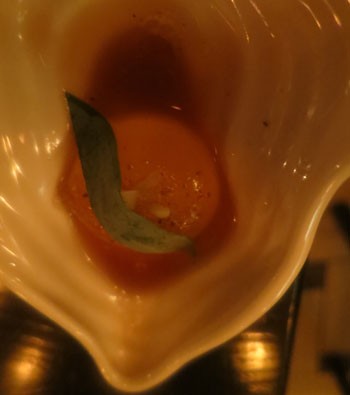 So, the drinks were interesting, tasty, and reliable. Which wouldn’t mean nearly as much if the service wasn’t so darn great. Everyone working there was friendly, the place itself is cozy, there was a piano player knocking out 1930s, 40s, and 50s hits, there’s a Bogart-y shadow on the wall going up the bathrooms: 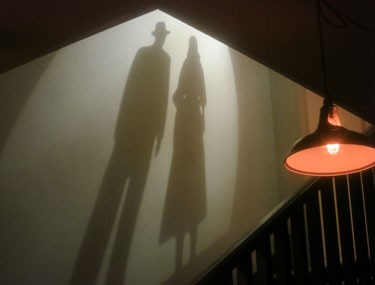 and the whole atmosphere is neat. And our main server was super helpful, so enthusiastic about the drinks, as well as knowledgeable, and very friendly. He greeted every table with a “Hello Ladies and Gents” and kept everyone happy, with the help of the other amiable employees. And, his name was Coco. 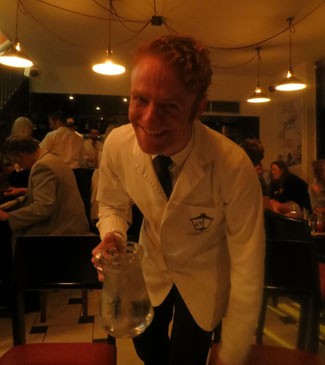 He told us he’s opening his own bar in London soon, so when you visit 69 Colbrooke Row, which you must, ask them where Coco’s bar is, so you can visit it, too.

Posted in: Bars, Cocktail News, Drinks on the Road