What I’m Drinking: A Tempest of Provocation with Jikuya White Sweet Potato Shochu

The world of spirits, liqueurs, and the cocktails one makes with them has undergone a wonderful internationalizing over the last, oh, 15 years (that number is not scientific, but more a musing digit that might approximate an impossible-to-actually-measure figure). By that I mean, so many products from around the globe once only consumed in their particular region or country are now being accessed by thankful drinkers in other spots. Make some sense? And this internationalizing is still rolling out, with more products showing in more spots. Again – thankful drinkers, including me! One type of produce that we’re finally seeing more of in WA (where I’m at) and the US in general is Shochu, the distilled tipple popular in Japan and made from a number of things: rice, sweet potatoes, buckwheat, and more. I’ll fully and readily admit I’m not a Shochu expert, but what I’ve had, I’ve enjoyed for its earthy, rich flavors (varying depending on the base product distilled) and friendly drinkability.

So, I was very excited recently to receive some Shochu in the mail (don’t be upset with me! I know I’m lucky), from Honkaku Spirits, which is one of the companies helping to spread the word and accessibility of Shochu, along with other Japanese spirits. They’ve been around since 2020, and are focused, amazingly enough, on working with family-run distilleries, which is awesome! One of their newly released imbibables is Jikuya White Sweet Potato Shochu, which is what I’m sipping today. Crafted at the Jikuya distillery (around since 1910! And specializing in sweet potato Shochu “completely sourced and produced in Kagoshima, among other specifications”!) by fourth generation Master Brewer-Distiller, Ms. Maiko Jikuya at the base of Mount Shibi, this Shochu clocks in at 25% ABV, and delivers a lovely flavor. Starting with a light-on-its-feet herbally, flowery (not heavy perfume flowers, but wildflowers) essence, it flows into notes of red berries and hints, just hints, of tea. Neat! Very approachable, very drinkable. And, delicious over ice, solo or with sparkling water (sidenote: there is also a Jikuya Black Sweet Potato Shochu, which is earthier, and well worth trying, too).

Shochu is often served neat, with ice, or with soda water (as well as with warm or room temp water), sometime with fruit juice added to the latter. It’s not as often utilized in cocktails. Not to say it isn’t! Just, from what I’ve seen, not as often. But while I enjoyed/enjoy it solo, I had to test it out with a few other ingredients, cocktail-style, because, well, that’s what I do! And after a little finagling, I came up with a combo that I think lets the Jikuya White Sweet Potato Shochu shine, but also lets it play nicely with others. This Shochu has such a delicate but memorable (hah! That’s a funny combo, but it works for me) nature, I wanted the cocktail to match, so it took a bit to find the right pairings. I landed on maraschino liqueur (I went with Luxardo Maraschino), whose somewhat lighter nuttiness was a swell fit, Dolin Blanc vermouth, due to the floral notes and bit of cuddle it always brings, and Scrappy’s singular Cardamon bitters, whose light spices and more florally goodness shone with the others. This foursome together sings a (if I can say this while being humble) liquid delight! It manages to be both layered in flavor, spice, floral, fruit, and maintain that delicate, brightness from the Shochu. You may want to have another the minute you finish the first. As you do, give a toast to the whole world, which – for thankful drinkers – has become a smaller place. 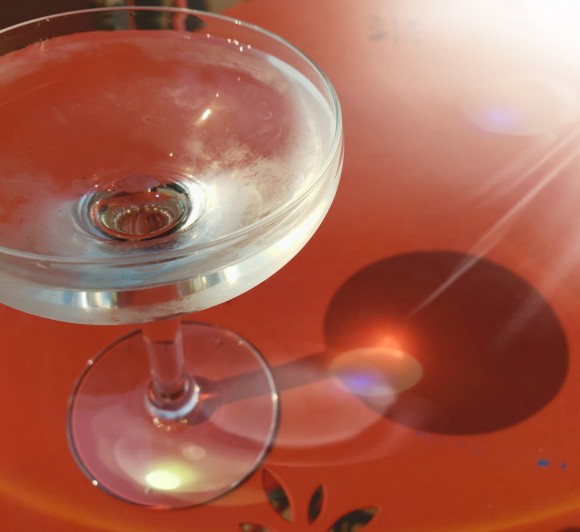 A Tempest of Provocation

It’s time for the next episode of the almighty Cocktail to Cocktail Hour, and it’s a humdinger! It features another Everyday Drinking segment, where I solve the drinking problem of someone off the street. But this time, it’s not just any ol’ someone off the street, it’s Paul Stanley* from the greatest rock-and-roll band in the land, KISS. That’s right, the Starchild himself had a bit of a drinking query and he came straight to the Cocktail to Cocktail Hour (like all good people). It’s a heck of show, folks, with singing, grinning, and a beautiful drink for Paul called the Luminous Angel, containing Cognac, Elisir M.P. Roux liqueur, orange juice, and Seattle-made Scrappy’s Cardamom bitters!

*May not actually be Paul Stanley in video; may be a genius Paul Stanley impersonator. Please don’t sue us Mr. Stanley. We only did it cause we love you.