What I’m Drinking: Now and Then a Porcupine

Do you go through phases in your cocktail-and-spirit-sipping? I’m sure you do, though admittedly I know some who have the same drink every time, year round, and I myself when younger probably had a lot of the same drinks. For some, it’s their signature I suppose. And then some have drinks via seasons, or occasions. And you know what? All those are fine, as long as you’re having fun! Fun is good! I, myself, now-a-days, often go through phases where I’ll have more of a certain spirit, or brand, even, sometimes solo, sometimes in cocktails. Recently, I’ve been on a bit of a Pernod jag, for example, having it over ice, or neat, or in drinks like this one!

In which, I took what may seem a step into the unknown, as I mixed it with underutilized (in the main, I’ve found, though perhaps here and there inroads are happening, and naturally this doesn’t go to the Nordic regions) spirit aquavit, specifically Wintersun aquavit, made out here in WA, specifically (again) in Everett, by Bluewater distillery. Wintersun has a swell balance, with that traditional caraway mingling with aniseed and orange, all on an organic grain spirit base.

That flavor profile seemed like it’d play well with Pernod, but something more was needed, and I went with French aperitif pineau de charentes, specifically (one more time!) Chateau D’orignac pineau de charentes, made from Cognac and lightly fermented Merlot and Cabernet Sav grapes, and aged in oak five years. The result is a citrus, floral, fruity delight, which goes (delightfully) with the other two members of our trio in this curiously-named drink, which is also curiously-light, with anise, orange, and spice undertones.

Now and Then a Porcupine

2. Strain into a cocktail glass. Garnish with that wide orange twist. Drink up.

What I’m Drinking: I Will Give You A Thrashing

People who know me best know that as the song says, I’m a lover not a fighter. So, don’t take the sorta aggressive nature of this title to mean I’m all up in your face. I’m not! I just had a friend suggest this as a title, and it’s a dandy name for a cocktail in my mind (and that’s the only mind I got). Also, at the time I was looking for a name for this very drink, a drink I created using the swell Old Ballard Liquor Co. Riktig Aquavit (I wrote a lot about the Old Ballard Liquor Co. here), which has a strong and memorable flavor. Not so strong as to give you a thrashing, but strong enough that you’ll remember it – and hopefully this drink, too. 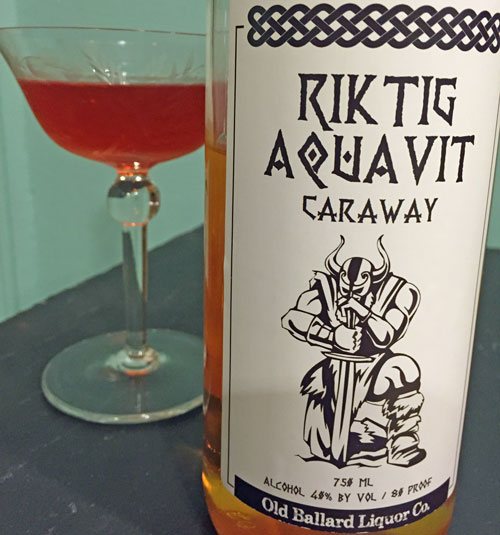 I Will Give You a Thrashing

2. Strain into a cocktail glass. Drink while facing Ballard.

Aquavit and More at the Old Ballard Liquor Co.

Washington State is awesome! There are so many fantastic distillers here now, I sometimes feel like the luckiest drinker in the world. And there are a couple even in my neighborhood, including the small-in-size, giant-in-taste Old Ballard Liquor Co., which is focused on making traditional aquavits, lovely forgotten products like Cherry Bounce, and more. Recently, I was doubly-lucky, in that I got to write an article about the Old Ballard Liquor Co. for the smashing Seattle magazine. And then, I got to put up a bit more of my interview with Lexi, the super knowledgeable distiller owner, on the Seattle magazine blog. Read the article and the blog to learn more.

*See all Seattle magazine articles by me