Some days are difficult. Take tomorrow, for instance. It’s a tasty kind of difficult, because two solid drinking days are happening tomorrow, the fifth of May, 2018. First, it’s Cinco de Mayo, a fantastic day for having Mexican-inspired drinks, in celebration of the Mexican Army’s win over the French at the battle of Pueblo and Mexican-American culture. If you’re having sippers for Cinco, I dig it. However! It’s also the 144th running of the Kentucky Derby, a day when more Mint Juleps are consumed than any other day, and a day when many fine hats are worn. I’m going the  Julep route tomorrow (admittedly, I may have a National Arms tomorrow, too). And one today, cause, well, I wanna make sure I have things right.

Why the Julep route this 5th? Well, a lot of the reason is because I received a bottle Clyde May’s Straight Bourbon in the mail the other day, and I’ve been itching to try it in a julep, and, well, the circumstances seemed too fortuitous to miss! Boasting a swell-looking bottle with visuals harkening back to the inspiration of the name, Clyde May that is, who legend says was a “moonshine icon who made the best whiskey Alabama ever tasted” starting back in 1946, and made by the Conecuh Ridge Distillery, this bourbon’s a nice 92 proof, is non-chill filtered, and aged for 5 years (hey, another 5 on 5/5!) in heavily charred American oak. Its aroma features vanilla, dried fruit, oak, and spice all playing together, and a taste that mirrors the vanilla and oak, but also delivers brown sugar, nuts, and more spice, including a peppery, near-peppermint-ness on the back end. Nicely balanced all around, and worth sipping solo, but also a solid cocktail bourbon that can provide flavor and backbone.

Especially in a Mint Julep, one of the older mixes bourbon pals around within. You love Mint Juleps, right? You’re a good person, so I’m thinking you do. It’s such a swell combo, not just for Derby day, but all spring long. Just remember, as S.B. Buckner, Jr. said in a letter to General Connor, 1937 “A Mint Julep is not the process of a formula. It is a ceremony and must be performed by a gentleman possessing a true sense of the artistic, a deep reverence for the ingredients, and a proper appreciation of the occasion.” 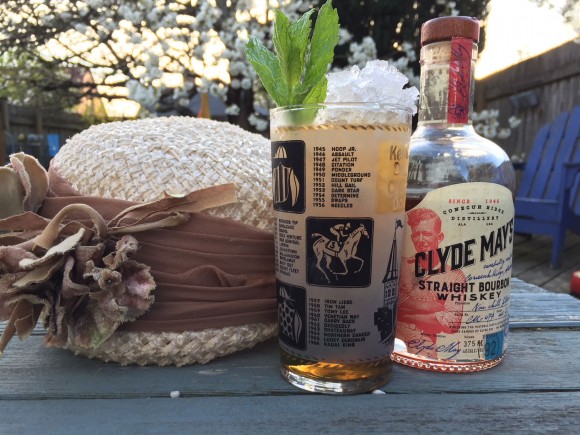 3. Fill the glass half way with crushed ice. Add the bourbon. Stir well.

A Note: To be traditional, you must crush the ice in a cloth bag. But if this is too much work, just start with crushed ice.

In Their Cups Week: Charles Fenno Hoffmann, The Mint Julep

In Their Cups week continues here at Spiked Punch, with another poem from the raddest collection of drinking and drinkers poems I’ve ever been associated with up to date (if you missed it, it’s a week celebrating In Their Cups because of a certain reading this Sunday). For today’s pick, I’m going with a poem celebrating one of my favorite drinks, and the drink to have the first Saturday in May–the Mint Julep of course. This poem about the legendary birth of the Mint Julep is by Charles Fenno Hoffmann, who was a New York writer, editor, and critic in the 1800s. If you’ve ever had a truly well-made Mint Julep (on May 1st or any other day), you’ll understand why he’d write such a ringing and singing and immortalizing number about the drink (and if you haven’t had a Mint Julep that matches the below, maybe we need to get you a better recipe or point you to a different watering hole).

‘Tis said that the gods on Olympus of old

(And who the bright legend profanes with a doubt?)

One night, ’mid their revels, by Bacchus were told

That his last butt of nectar had somehow run out!

But determined to send round the goblet once more,

They sued to the fairer immortals for aid

In composing a draught which, till drinking were o’er,

Should cast every wine ever drank in the shade.

And the spirit that lives in each amber-hued grain,

And which first had its birth from the dew of the morn,

Was taught to steal out in bright dewdrops again.

Pomona, whose choicest of fruits on the board

Were scattered profusely in every one’s reach,

When called on a tribute to cull from the hoard,

Expressed the mild juice of the delicate peach.

The liquids were mingled while Venus looked on

With glances so fraught with sweet magical power,

That the honey of Hybla, e’en when they were gone,

Has never been missed in the draught from that hour

Flora, then, from her bosom of fragrancy, shook,

And with roseate fingers pressed down in the bowl,

All dripping and fresh as it came from the brook,

The herb whose aroma should flavor the whole.

The draught was delicious, and loud the acclaim,

Though something seemed wanting for all to bewail,

But Juleps the drink of immortals became,

When Jove himself added a handful of hail.