Hey, babies, it’s hot outside. Even up here in the northwest, the temperature is too much. It’s time to head to the beach – or, if you’re landlocked, or just can’t get away to the beach, or don’t want to deal with all those crowds, it’s time to head to the Beach Bubble. This little cooler-downer is the tropical ticket when the temperature has gotten troublingly high. Just try it! 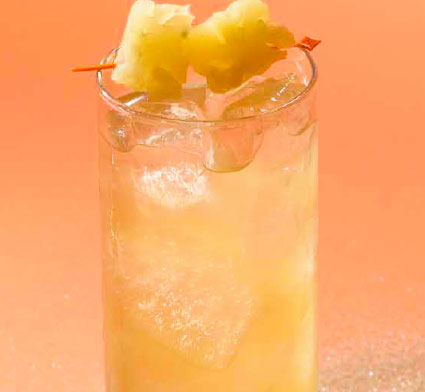 The Beach Bubble, from Dark Spirits

1. Fill a Collins glass or large goblet three-quarters full with ice cubes. Add the rum and juices. Stir, but with respect for the beach’s mellow demeanor.

2. Fill the glass up with ginger ale. Stir, but again, mellow-ly.

3. Spear the pineapple chunks on a toothpick, and float them in the glass (watch out for that toothpick when drinking).

When I began to write this post, I was looking at a calendar for June. And so I thought today was going to be Friday, July 13th. When it’s actually Friday, July 11th. I’d planned to warn you, friends, to not walk under a ladder today, cuddle a black cat, or forget to toss a whole handful of salt over your shoulder. And tell you to instead have one of these drinks, too, as it’s a very lucky drink. Now, it’s not Friday the 13th. But I still think you should have one of these, because everyone needs a bit of luck every day. And, as I said, this is a lucky drink.

Why, you might ask? Well, first it has apples in it, and apples are the luckiest form of produce. You might think clover, but that’s a myth. It’s apples that are healthy, patriotic, and crunchy – all lucky things. And, also lucky, in this drink I’m using Tree Top fresh pressed apple juice. See, Tree Top is a company from up here in Washington State, in Selah to be specific, that has been here for 50 years supporting the state’s fruit growers – over 1,000 apple and pear growers to be specific, and all their juices are made from 100% USA-grown fruit. That is lucky on all sides.

Also, this drink features 3 Howls single malt whiskey. If you didn’t know, 3 Howls is a distillery in Seattle itself, and they’ve managed to put out 12 different spirits in just one year! Including this whiskey, whose caramel and vanilla hints go smoothly here, is also lucky. And if that wasn’t enough, the third core ingredient is Averna, a nice amaro that brings just the right amount of herbalness.

And this drink is of the super-refreshing variety and, as it’s summer, the mercury has risen for most and us, and a super-refreshing drink is needed. So, this Friday, the 11th, is a great day for this lucky drink.

Hey, it’s the 4th of July! Is anyone reading this? Perhaps not, but just in case here’s a drink that’s sure to up the refreshing ante for your holidays – the Happy Crab. It’s not, as you might think, a reference to how holidays make some folks crabby. Oh no, it’s a reference to the happiness of summertime when you have a really refreshing drink. One of my favorite refreshers in summer, by the way, is English boozy ginger beer Crabbies. And Crabbies not too long ago released a new version, Spiced Orange Crabbies, which is also tasty when the sun rises high in the sky.

But, you know me – even tasty things I believe can sometimes be tastier when mixed with other tasty things. Which is the case with this very drink, as it takes the tasty new Crabbies orange and mixes it with another summer fav, dark rum, and then, just cause I’m crazy for it, Bénédictine. And you know what? The end result is awesome. Try it this holiday, or anytime this summer, and see how right I am. You’ll be happy . . . as a crab. 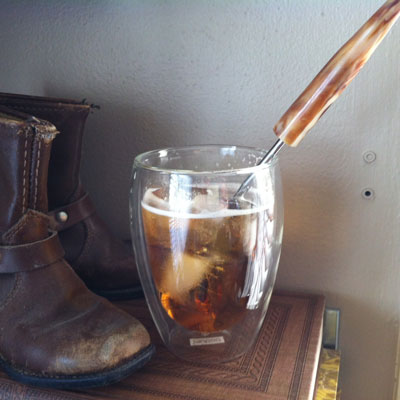 2. Add the Crabbies. Stir to combine. Face the sun with a smile.