What I’m Drinking: The Audible

Are you ready for some football? No, really, are you ready? Because we’re now in the thick of it, with passes being passed and blockers blocking, and, most importantly, football parties happening in parking lots and homes alike. Don’t let your party get stuck with the same old plays (and by “plays” here, I mean drinks) being served up to defenses who will then laugh at your tired plays. Instead, call an Audible and serve up the below mix. It’s a strong one – because sometimes we need a strong drink when watching our favorite team. 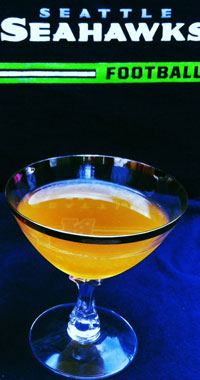 It’s delicious, too, because sometimes we deserve a reward for our support. Oh, it’s also a tad Italian – just cause I like Italy. And because Italian fans are, outside of you, the most rabid fans in the world, and when drinking this, you will channel all rabid fans and become the most fanatical fan in the world. Promise. I used Woodinville Whiskey bourbon, Letterpress limoncello, and Scrappy’s orange bitters here, because they’re made in Seattle, and I like to support my home teams.

2. Strain through a fine strainer into a cocktail glass or smallish football helmet. Drink and cheer, drink and cheer.