Well, here it is, Le’ Finale’ of the Italy 2009 (well, maybe Spring Italy 2009–a boy can aspire, right?) blog posts: This Time It’s Countryside, afterwhich the blog can drift back into its more boozy-specific nature. Though I love, love, love (and want to be back in right now!) the Florence and the Bologna, my favorite part of Italy is what’s often referred to as the Upper Tiber Valley. This is an area just off of (and sometimes crossing in to–there’s a lot of border crossing) southeastern Tuscany, and right over into northern/northwestern Umbria. Not overwhelmed with touristy folks, but full of any amenities you’d want, this area is absolutely exquisite, with hills dotted with olive trees and grape groves, little villages, curious houses tucked in here and there, friendly faces most everywhere, and delicious food and wine (at usually amazing prices).

We (that’s wife Nat and I in this particular sentence) have stayed in this area five times now, always near the sweetest little village, San Leo Bastia, and always renting a place from Amici Villas. The Amici folks are super helpful and manage an assortment of places in the area. Every place we’ve stayed at has been nice, clean, and handy for touring around the area, and, if you don’t mind me getting monetary: amazingly reasonable. For example, this last time Casa Vitiano was just over $200 per person–for the week. 3 bedrooms, 3 baths, 2 kitchens, gianormous yard, bikes, garden . . . fantastic deal. Here’s a pic: 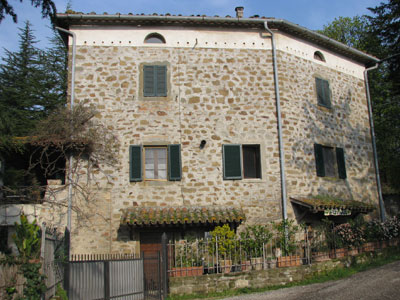 and that’s just the side view. Here’s the front door: 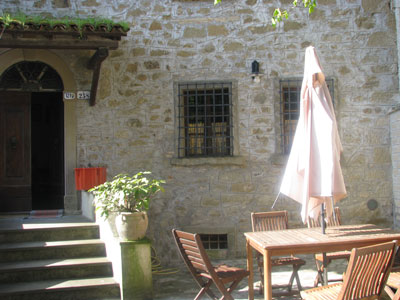 San Leo Bastia is smallish, but has the world’s best café, Lo Spaccio, which you can read a bit more about in my Viparo lament, as well as the world’s second best café, under which is a tasty restaurant, Taverna di San Leo Bastia. From San Leo, too, you can get to a host of other villages, towns, and cities for day trips (towns like Assisi, Citta di Castello, Perugia, and more). Even better than those famous places though, San Leo is only about 7 or 8 miles away from Nestor’s Pizzeria. The best pizza in the world. There, I said it–you wanna argue? Leg wrestle? I will kick your bootie in Nestor’s honor. Every time we head to the Upper Tiber Valley, the first thing we do when arriving is visit Nestor’s. This time, we (and now I’ve switched into the larger “we” which includes: Stereolad, Schticker girl, Andyo, and Deenayo) stopped at Nestor’s twice. The first time, I had the Parigiano pizza, which is asparagus and an egg over red sauce and cheese (and yes, egg on pizza is better even than reading the Essential Dr. Strange, Volume II), and the second time I had the impossible-to-believe-but-it-is-even-better Ruboscuore, which has red sauce topped with béchamel, boletus mushrooms, walnuts, and more cheese. Damn, I wish I had a picture to do it justice. But instead, here’s a picture of Stereolad absolutely blissing out over his multi-meat number: 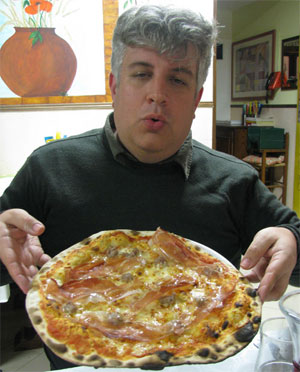 Nat actually went off-map the second time at Nestor’s, and had a calzone, which had greens, béchamel, and more, and was so darn good: 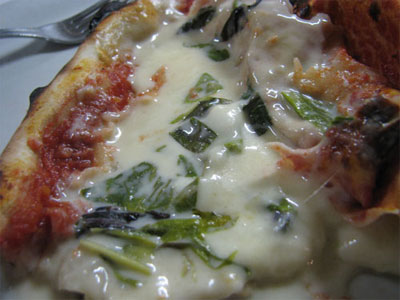 Nestor’s is owned by the nicest family as well (I got a hug from poppa), and they brought us free limoncello on our first stop, and then a whole plate of cakes and glasses of vin santo on the second stop. I don’t have a web site to point you to, but if you’re ever within 1,000 miles of Nestor’s, you should email me and I will tell you how to get there. Cause it’s the best pizza in the world!

And, since you’ll be close, you might as well stick around the area (I’d suggest at least a week) so you can have dinner at the above-mentioned Taverna di San Leo Bastia the next night. The owner, Sergio, is incredibly nice (you notice a pattern here with the locals? All swell folks) and also cooks the food, which is tasty. They have pizza too, a slight notch only down from Nestor’s (but still better than any available in Seattle), but my favorite dish there is the Gnocci con Tartufo, which I’ve had on two separate trips. The gnocci is just chewy enough, and the creamy truffle sauce is rich and plate-licking good. If I ate meat though, I’d go on and on about the carni antipasto, which was artistic in its presentation and from all reports meat-a-licious. This picture in no way does it justice, but you’ll get the idea: 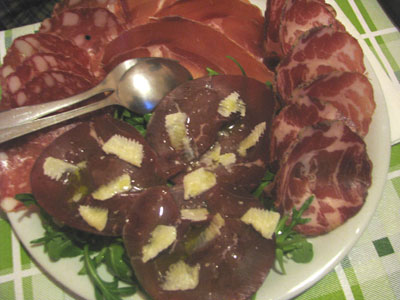 As mentioned, there are many spots to step into for an afternoon, or even an hour, that are nearby, and one we tend to visit (and did this time) is Anghiari, a village perched on a sharp hillside’s edge. Anghiari has been around for, oh, some 1000s of years, so it has vistas a poppin’ and ancient walls and towers to wander round about within and without, as well as a convenient internet café right on the square. All good stuff.

However, what I want to chew on here is the restaurant we wandered into, Perbacco. And a lucky wander it was, as the owner was a delight, and the food and wine even better (can I get a hey-ya for that winning combination?). I was starving (either cause we’d walked around a lot that day, or cause I’m always starving or at least ready to tie on a serious feedbag when in Italy), and ordered up a full-course feast that included: Frittata al Formaggio e Pinzimonio Tiepido (a perfectly balanced frittata over blanched veggies and topped with cheese), Patate Salata al Rosmarino (which is as you’d expect), and Tagiatelle con Verdure e Pecorino Toscano, which was simply (and simply excellent) homemade pasta with veggies and cheese: 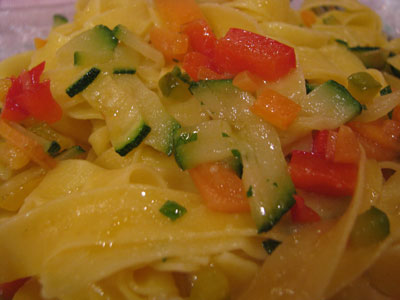 Nat also frittata’d, but she began with a delicious Risotto Giallo Asparagi e Brie (that’s right, risotto with asparagus and brie. She knows how to bring it): 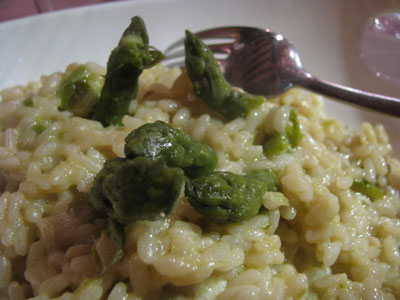 Now, I realize (so just quit your fussin’) that I’m starting to go on perhaps too much, or at least so much that you might end up quitting your job and running to Italy right now. Which wouldn’t be a bad thing. But do I want that kind of responsibility? That weight on my shoulders? Maybe. I can’t completely decide yet. So, I’m going to wrap this post and the trip up with just a couple more quick hits. First, the Umbertide market. Umbertide is yet another lovely little town (where one day I might live–you can come visit), which hosts the market on Wednesdays (the market, or a market, is in a different town on different days), and it’s another regular stop for us. I got some nice socks this time, and Nat got a scarf, and we picked up some cheese and veggies, but Stereolad and Andyo got up close and personal with a porchetta truck: 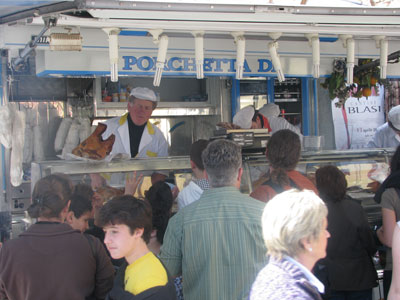 There were four porchetta trucks at the market, and they were all serving this pork-y delicacy that even to a veg-like-me smells outstanding. The trucks show up around the markets, as well as at sporting events and such, and are beloved by meat eaters (especially our pal the Husky Boy). The basics involve a whole pig, seasonings, cooking, and happy carnivores. I’m not sure the pig is happy, though: 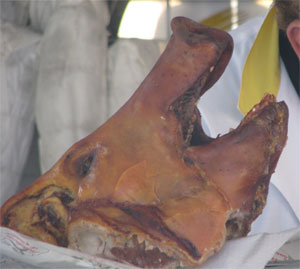 To take your mind off that, gaze at the stylish people you see at the markets: 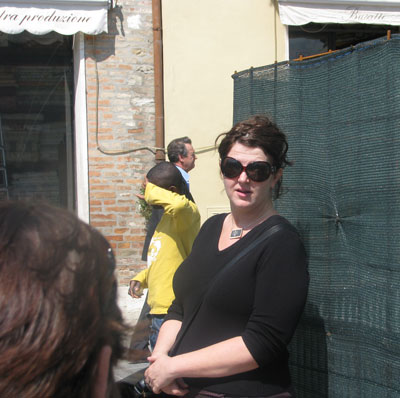 and everywhere in Italy, for that matter: 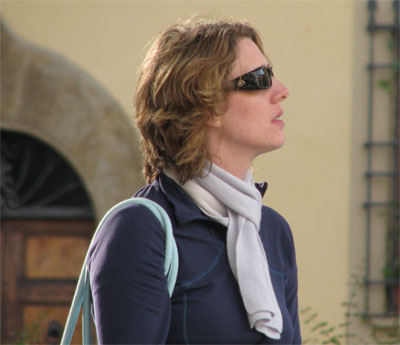 While we (as evidenced above) spent some salivatingly good times at restaurants in the countryside, I’d be remiss if I didn’t mention that we also had some spectacular meals at home (after stopping at the convenient Euro-Spar in Trestina and other spots for provisionss), and while I don’t have any pics of such, let me take a moment to applaud Stereolad & Schticker Girl, Andyo & Deenayo, and Nat for making me three scrumptious meals at the Casa Vitiano. Dang, it’s never a bad idea to travel with out-of-sight chefs (especially when they’re alright with you sitting around swilling wine and limoncello and Vipero while they cook). It certainly was heavenly, even if I did trick Andyo into taking a trip to hell–Hell Bier, that is: 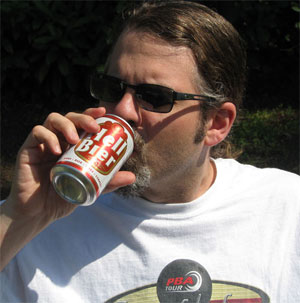 Well, pals and palinos, that is almost that–wait, wait, I need to make one more, non-culinary or drinkinary, note. And that’s a long-distance shout out and tennis ball throw and behind-the-ear scratch to Lapo, our (for two fun afternoons, at least) adopted Italian puppy, who made being away from Rory and Sookie at least a little more bearable:

If this post, and Italy post I and II (and aside I) didn’t get you day-dreaming about going, or actually buying a ticket to go, then you must be some-sort of zombie. And I don’t think zombies can read. Which means plan that trip up, and plan on hitting all the great spots mentioned. Remember one thing though: having a guide is never a bad idea–and you know how to reach me. My suitcase can be packed in about a half hour. Cause I am ready to go back (as long as Nat goes with). 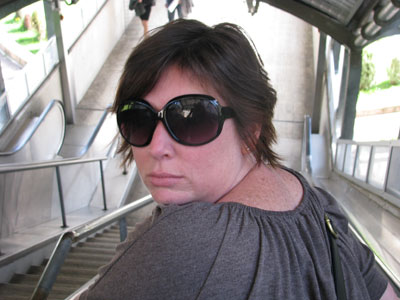 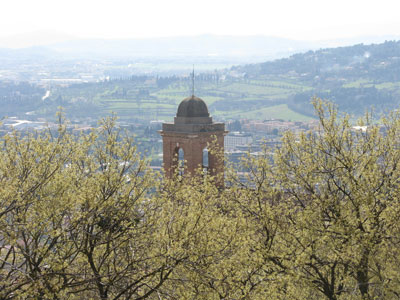 For a drinks blog, you sure didn’t focus enough on the Hell Bier. 3 for a euro? Hellz yes!

I miss ole Lapo…what a dog!

despite the fact that it’s in the same price range as hamm’s or milwaukee’s best, i reckon it was at least slightly better tasting just because it’s italian. oh, and because you were in italy. i can feel myself turning green, and not because of that pesky reporter guy mcgee, if you get my drift.

Hi, Im from Italy and I have published , it is about travel bologna, check it,

I was surfing the blog world, when your blog popped up, so I thought I would say hello – Very Good photos !!! I have shared this with twiter

Absolutely Very Good photographs! They make me dream of Italy and my next visit. I love Italy and travel there often and hope to call Rome one day. I have shared this with facebook

I love the site and hope to visit you in October when we travel to Umbria.