I’ve read, I think (though I haven’t kept the meticulous records I should have), at least 80% of all the Agatha Christie books, and yet I’ve still only a small handful of Agatha Christie Cocktail Talks on the ol’ Spiked Punch. That, friends, is a shame! But she doesn’t always have her characters swilling in the Cocktail Talk style, though Poirot (if I have to explain who that is, well, you need help) does like his crème de menthe and suchlike, and folks are swilling in her books. Probably, I get too caught up in the mysteries themselves, like in Appointment with Death, one of the ‘Poirot-on-travels’ variety, where he is in Middle East when a not-very-nice-at-all matriarch is murdered – at least, he thinks it is murder! He ends up hanging with a local gendarme to get to the bottom of things, cause (as everyone knows) Poirot doesn’t like murder! The particular usage of that phrase by someone else I believe caught my eye twice in the below quote, along with the whiskey and soda being consumed. So, this time, though I was deep into the mystery, I still did a double take and took the quote along for this very Cocktail Talk.

Colonel Carbury said unemotionally, “He don’t like murder! Quite right! No more do I!” He rose and poured himself out a stiff whiskey and soda; his guests’ glasses were still full. “And now,” he said, returning to the subject, “let’s get down to brass tacks.”

Cocktail Talk: The Murder at the Vicarage 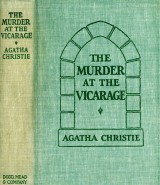 I’m sometimes the tiniest bit sad when re-reading The Murder at the Vicarage, knowing that it will never again be like the first time (though some say nothing is the like a first time, I’m not sure that’s as true a cliché as one might think, in general, by the way). Just cause, it’s the first book featuring Agatha Christie’s incomparable Miss Marple (I believe there was a story with her published before this book, funny enough, but for so many, this book was her introduction), and so when reading it without knowing much about her, she seems at the beginning a minor character, a charmingly (maybe this is hindsight) gossipy, watchful, inquisitive small village older lady (or old maid, in a non-pejorative way). And then as the book unfolds, you – dear reader – slowly become aware that she’s the stuff, the one with the insights, and the sharpest tool the St. Mary Mead (the village in question) shed. Now, while that feeling can’t return on subsequent readings, I still enjoy the re-read. It’s jolly good fun to see how Agatha C plays against the preconceived notions around the elderly, and how she unveils Miss Marple being Marple. And you see clues you may have missed, pick up on characterizations that might have seemed less important, and of course get to revel in the language again. Heck, now I sort-of want to read it once more (I’m sure I will, if life allows). And, there’s cherry brandy! What a book.

I agreed, and at that moment the door opened and Miss Marple made her appearance.

“Very sorry to bother you, Miss Marple,” said the Colonel when I had introduced him, putting on his bluff, military manner, which he had an idea was attractive to elderly ladies. “Got to do my duty, you know?”

“Of course, of course,” said Miss Marple. “I quite understand. Won’t you sit down? And might I offer you a little glass of cherry brandy? My own making. A recipe of my grandmother’s.”

–Agatha Christie, The Murder at the Vicarage 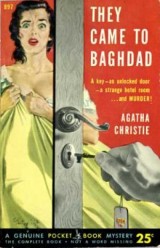