When a bottle shows up at your door wearing a sort-of a leather sheath, stitched up the back like a very cool (and very tough) boot, and having a grinning bronzed skull bottle topper, first, you very safely, very slowly, and maybe a little clandestinely, peek outside the door to ensure it wasn’t delivered by someone a bit more menacing then the local postal person. If it wasn’t, then (if you’re me), you take a sip.

If (again, if you’re me) it was a bottle of Padre Azul Reposado tequila, you don’t get the burn or serious kick you might expect from said presentation (though really, it’s a shout out to Mexican Day of the Dead culture), but instead a smooth, layered, sipping tequila, made by hand from 100 percent select blue agave, and aged for eight months in French oak casks. The flavor unfolds beautifully on the tongue, too, with a swirl of vanilla, a little nuttiness, a light herbal-ness, and a hint of smoke. Really, it’s one to have neat or over ice, at least to begin with.

If (a third time) you’re me, however, you can’t resist trying even a tequila or other spirt this fine in a cocktail. At first, because of the leather-jacketing-and-skull-grinning, I thought I’d go the more hard core route, and bring in some serious heat. But then, thanks to that vanilla and other notes, my brain exploded in another direction entirely – chocolate. I actually think tequilas of the right kind make a nice match with chocolate, and here, it’s a lush pairing. A little Cointreau made another swell attendee. I couldn’t completely let go of the spice idea, but wanted it clean and crisp and not annoying, and in that situation only Scrappy’s Firewater habanero tincture will do. One more magical ingredient – Bittermens Xocolatl Mole bitters, which somehow brings all of the other ones together – and we have a dessert drink fit for a king, no matter what they’re wearing. 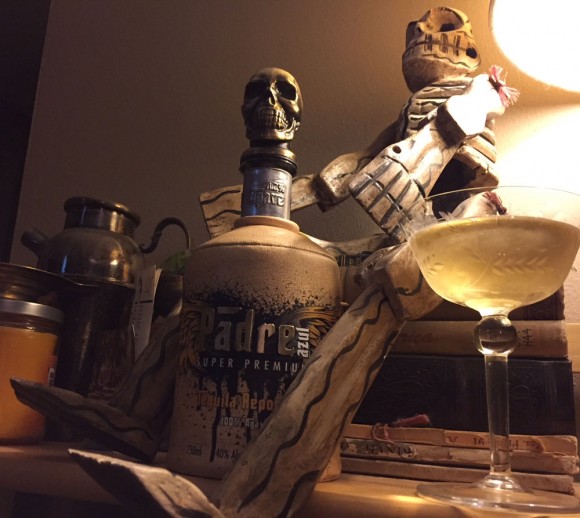