Hello dancing friends! Recently, I went down with some pals to a rad bar in Seattle called the Dynasty Room (interestingly, it’s in a building set to be demolished, so get there while you can), and had a drink called Watch Me Nay Nay, a drink created by bar manager Michael Chu and Morgan Marchant. It was delish (and had things like mescal and rose’), and then I got to write about it for the sweet Seattle magazine. And now you can read about it! Everyone wins when you check out my Watch Me Nay Nay article now.

What I’m Drinking: Fire on Popocatépetl with Montelobos Mezcal Jovan

There was time when if you wanted a little fire in your drink you had to do it all yourself – infusing your own something or other, which is fun, but also can take time, and ensuring consistency is hard. Now, though, it’s easy to fire-up your cocktail, and in a tasteful and amazing way, thanks to some amazing global booze producers. One of my favorites is Ancho Reyes, the ancho chile liqueur based on a recipe from way back in 1927, which has a fair amount of heat, sure, but is also complex, with layers of spice, too, including cinnamon, and cocoa, tamarind, and a little nuttiness. Dreamy stuff, really.

Another lovely firebreather is Scrappy’s Firewater tincture (Scrappy being the amazing bitters-and-such maker from right here in Seattle). Made naturally from habanero peppers, and also carrying some fresh floral notes, it delivers a load of kaboom, but used responsibly adds a lovely clear clean heat to drinks.

When thinking about using the above, well, go crazy! You know what’s best for you. For me, my first thought was mezcal, specifically Montelobos Mezcal Jovan. Admittedly, I had gotten a bottle of it in the mail (lucky, I know!). But also, cause it’s a 100% organic agave-based spirit, made by the same family for five generations, and made in the shadow of the mountain of wolves (Montelobos means mountain of wolves even). Really! And as you and I know, good stories make good cocktails. The fact that this mezcal has a smoky flavor buoyed by hints of lemon, rosemary and pepper, and grilled jalapeno is also crucial. It’s certainly sippable solo, but makes an ideal base for cocktails, too, thanks to the approachability of the flavor.

A good starting trio, I rounded it out with some fresh orange juice – that citrus burst and sweetness provided a balancing flavor for all that heat and smoke and savory. And then we were close to the top of our cocktail climb, but a little something extra was needed: and that extra (extra vegetal, extra chile, and extra stand of flavor) was St. George Spirits Green Chili vodka. I know, doubling up on what we call base spirits is odd, for some, but this vodka’s made from a basket of California-grown peppers, including jalapenos, serranos, habaneros, and red and yellow bells, and it delivers a bright peppery, zingy, cilantro-y, citrus-y flavor.

All together, if I can say this while being humble, this is a delightful (really, amazing in cold or hot weather, and a mighty accompaniment to a Mexican meal) cocktail. If you aren’t scared of a little heat and a lot of flavor, you should climb this mountain. 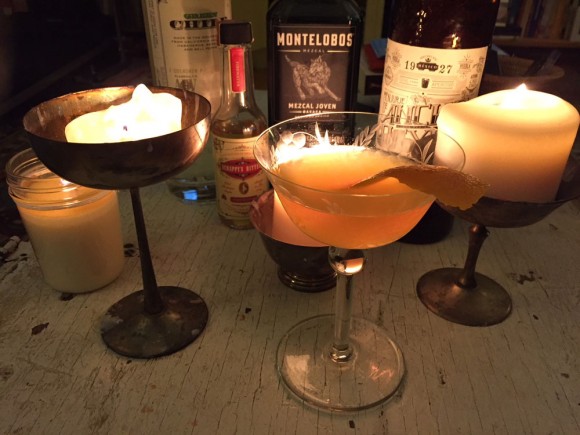 1. Fill a cocktail shaker halfway full with ice cubes. Add everything outside of the twist. Shake well.

2. Strain through a fine strainer into a cocktail glass. Garnish with the wide orange twist. 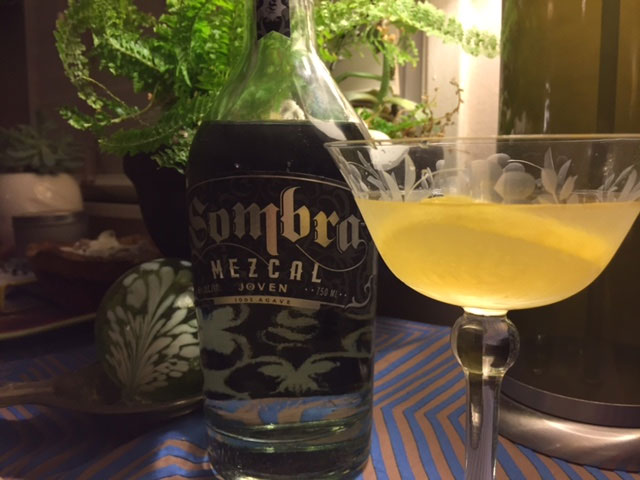 Encircle the Ouroboros at Canlis

Canlis is one of Seattle’s restaurant gems, and I (and wife Nat of course!) recently got to stop in and sit at the re-designed bar and sip and chat with friendly bar manager James MacWilliams and bartender José Castillo. One of the sippers was the Ouroboros, a mezcal-based delicious drink that José came up with. Then, I got to write about the drink (including the recipe for it) and the place and the people for Seattle magazine. You should read about it now. Then head to Canlis yourself.