Cocktail Talk: She Shall Make Murder

Our third Day Keene Cocktail Talk (!) from the murderously-named Homicide House (!) collection of stories he originally published in the pulp mags (!) takes us into a sort-of bad-man-redemption-or-not kind of story, where you can’t help but try to guess what the last turn will be, and probably fail in the guessing – which is a fun kind of a story! The below quote isn’t really a traditional Cocktail Talk one, as it doesn’t mention a specific booze type or drink or drink type. But it does have one of my favorite words for drunk/tipsy in it, so I have to highlight it (and speaking of highlighting things, don’t miss the other Homicide House Cocktail Talks, which so far include “My Little Gypsy Cheat-heart” and “If A Body Meet A Body“).

I had been positively identified by three barman along the highway as the driver of the car. The last barman had refused to serve me. According to the paper he has told investigating officers, “I sez to the guy, look, chum. You’re stinko right now. One more drink under your belt and you’ll drive that high-power job of yours right into the drink. And it would seem he did.”

–Day Keene, “She Shall Make Murder”

Cocktail Talk: If A Body Meet A Body

Another (don’t miss the “My Little Gypsy Cheat-heart” Cocktail Talk) from the sixth Day Keene in the Detective Pulps collection called, strikingly enough, Homicide House, this story, much like the earlier-mentioned yarn, I believe was eventually the basis, or partially at least, for a Day Keene novel, this time Home is the Sailor (which you can see more on if you check out all the Day Keene Cocktail Talks). This story has all the Day Keene traits: the action jumps right in, the narrator’s in a mess of trouble, there’s a murder or more, double-dealing, and boozing and carousing. And the below quote, which uses “boiled” in a way we should bring back.

“I don’t think I did kill her,” Stanton told him wearily. “No matter how drunk a man was he’d remember a thing like that.”

Waddy was dubious. “I don’t know about that. You were plenty boiled when she walked you out of here.”

“Had he been drinking all evening?” Marks asked.

“No,” the barman admitted. “As far as I know, he only had two old fashioneds. But he must have been drinking before, because the second one hit him hard. Corliss had one hell of a time getting him into the car.” 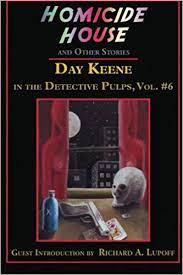 I recently (finally!) picked up the sixth collection of Day Keene stories from the glory days of pulp magazines, a collection called Homicide House and Other Stories. Like past volumes, it’s a pulp-y gem of fast-paced, twists-and-turns, tough men and tougher women stories, many following the Keene trope of “how are they ever going to get out this predicament” style, but here – I think for the first time – we see a couple of stories that were later fleshed (hahaha) out into novels, perhaps when the mystery/pulp/action/detective realm took a turn from magazines into easily-tote-able paperbacks. One of those is the story “My Little Gypsy Cheat-heart,” which I’ve read and loved in a longer version, My Flesh is Sweet (read the My Flesh is Sweet Cocktail Talk why dontcha – actually, don’t miss all the Day Keene Cocktail Talks). In the latter, there’s a little more character development, a little more plot, a little more this and that, but that doesn’t mean the former wasn’t fun to read – it was! And neat to see how Mr. Keene built on it, as if the story was still in his mind after his first take. The story version of the story, if that makes sense, led me to wanting to highlight the below quote, too, which is an apt one as the story (and the novel) start with a murder in Mexico, before moving stateside for the murderous finale. It also has a lovely description of how one might feel the morning after too many.

The phone bell was loud and insistent. I sat up mouthing the cotton the tequila I’d put away had seeded and looked at my watch. It was five minutes to two.

“Ad Connors speaking,” I said into the phone.

“Come over to the Flamingo,” Elena begged. “Please. As fast as you can get here, Ad.”

I’ve been re-reading the Day Keene duo book (duo, as it contains two full novels – quite a Day deal, really) put out by Stark House, the one which contains both My Flesh is Sweet (which has its own My Flesh is Sweet Cocktail Talk in the Spiked Punch, and for that matter, check out all the Day Keene Cocktail Talk posts) and Framed in Guilt. And in said re-reading, a couple sweet quotes I should have highlighted the first time popped out to me. So, consider this Part I.  Framed in Guilt (which may well be the mighty pulp master Keene’s first!) is a fast-paced, well-plotted, yarn in the Keene style, in which Hollywood scripter Robert Stanton barrels around CA, with his past catching up to him (maybe?) and a murder or two hung on him, as well as nearly getting burned himself. It moves in the Keene manner! Which is a high compliment indeed. And they drink some Scotch, as well as other things. But below, Scotch.

The man at the wheel seemed to shrink. His coat was suddenly too large for his shoulders. It seemed difficult for him to breathe. “I didn’t know there was a child. Believe me.” He took a bottle from the glove compartment. “After that, I need a drink.”

“You might ask if I cared for one,” Grace said.

He handed her the bottle. It was dimpled bottle Scotch, and tasted as good as it smelled. Grace drank sparingly, then corked and returned the bottle to the glove compartment.

Picked up another of the Day Keene short story collections recently, this one called The Case of the Bearded Bride (it’s Volume 4 of the series bringing all his stories from the old detective pulp magazines), and it’s full of the same Day Keene delicious-ness as the earlier volumes. And by that I mean, fast-paced yarns that are sometimes hard-boiled, sometimes mysterious, sometimes noir-ish, and always fun to read. The proofing here as with past volumes leaves a lot to be desired, but hey, it’s just sweet these stories are back in print. There’s a fair amount of bars and booze in them, but I picked a beer quote for this volume’s Cocktail-Talk-ing (check out past Day Keene Cocktail Talks for more sweetness), because I don’t often beer-it up, and also because I liked this portrayal of a man just out of prison. Oh, the name of this story is a humdinger, too, “It’s Better to Burn.”

Gone were the held-back jewels he had put aside as an umbrella against the day that it might rain. Gone were the luscious blondes and the redheads. Gone was his Cadillac car. All that remained were sixty-six dollars and twenty cents and the belly that even two years in a cell had failed to diminish. He promptly steered it to the nearest bar and spent a dollar and eighty cents of his capital to fill it with beer. It had been two years since he had had a drink. Mellowed by the beer, he considered his prospects. They weren’t bright.

I earlier had a Day Keene Cocktail Talk (there are many Day Keene’s here on the Spiked Punch, cause he’s grand in the pulp way) from the story collection Death March of the Dancing Dolls (one of a series of collections of his pulp mag stories and yarns and legends and tales). But guess what – one was not enough! I almost forgot about the below beaut, which reminds us how long two of my favorites have been coupling in glasses and people’s minds. Sadly, the gent rolling it out isn’t, oh, the most lovable of narrators, and . . . well, you’ll have to read the story!

The only bright spot in the picture was Connie. She’d been a hasher when I met her, and a good one. She took to the job in the joint across from the City Hall like Benedictine to brandy.