EvenStar Shochu and the Venus in Voiron Cocktail 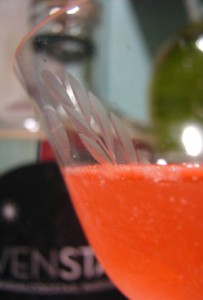 Here’s something that’ll add a little kick to your holiday season–Seattle has another local spirit now available for public consumption. After the various distillery articles, it’s probably not surprising that there are more new spirits, but what’s surprising is that this one probably isn’t going to ring any bells (or not many). It’s a shōchū, a Japanese-origin spirit, one that often goes through a single distilling, usually made from barley (though other options abound), and usually with a lesser alcohol content as well as with less calories than say, vodka and various health benefits (or so the legends go). There are some other rules and such, but I’m starting to digress too far afield. The main point is that the Sodo Spirits distillery here in Seattle (lucky us) is making and marketing a shōchū called EvenStar.

If you’ve never had shōchū, or shochu, then you aren’t alone. I hadn’t tried it but once, until recently experimenting with the EvenStar. It was light on its feet as you might expect, with a hint of rosemary and grain and a tiny herbal undertone. The suggested drinking modes cover the gamut from neat, warm (like some sake is consumed), over ice, and mixed in cocktails. The friendly folks at the Sodo Spirits have some cocktail suggestions on their site and some that come along with the EvenStar (by the way, they were nice enough to send me a bottle) but many of the drinks were using it alongside other base spirits, and to me it seemed to have enough taste to stand as a base spirit, if that makes sense. So, I did what comes naturally to any cocktail-loving cocktail lover; I started experimenting on my own.

I thought that the EvenStar’s hints of herbalness and rosemary might match up with other herb-ish mixtures, and I was right–it matched up well with French liqueur Chartreuse, especially the green version, as well as with the earth mother of bitters, Peychaud’s. After I had those two other ingredients, I just needed to balance everything out a bit, the low and the high, the herbal and the sweet, the gossip and the facts, and a little fresh orange juice did the trick right. The end result is a cocktail worthy of Venus, the goddess of love and beauty, as it’s light, won’t weigh you down, and has a lovely glow. I suggest trotting down to your local liquor store (if in the Seattle area) and picking up some EvenStar and taking Venus out for a spin this winter. Or, try it in other mixes and let me know what you come up with, because I’m always open to other ideas. And if you don’t live here (well, first–why not?), then come for a visit, because our local distillers are making Seattle an even finer place to reside within.

The Venus in Voiron Cocktail

2. Strain the mix through a fine strainer into a cocktail glass. Drink looking east, and then drink looking west.