What I Wish I Was Drinking: Accismus Blossoms

It’s August, and gardens are seriously in overdrive, and flowers are still showing their faces, and skirts and shorts seem to be getting even shorter. It’s enough to make one blush, all this blooming. But I suggest, all my little summertime Romeos and Juliets, that you remember what the word “accismus” means: showing no interest in something while secretly wanting it. Or, to say it another way, don’t forget to keep your cool in the face of all this sultry floral-ness. To help out, here’s a delish little floral drink. It’s a tad sweet, but sweetness will balance out the saltiness from any late-summer sweat.

2. Strain into a cocktail glass. Garnish with a few edible flowers.

A Note: The new Crème Yvette can be subbed in for the Crème di Violette with no ill effects. 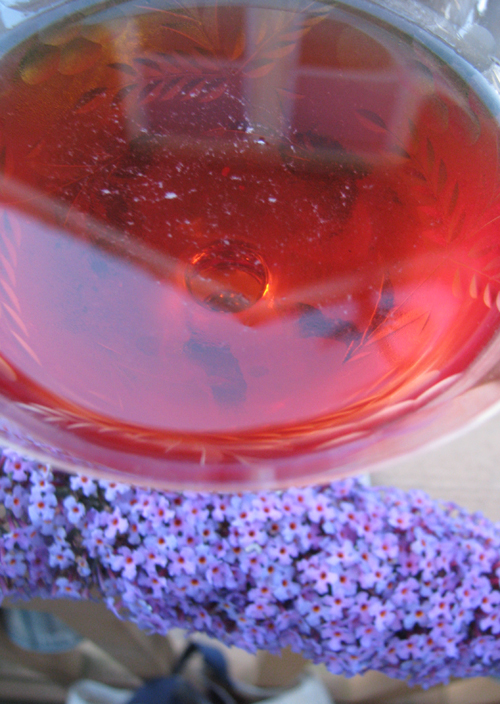 Wine Cocktails in the O.C.

These days, everyone wants to go Hollywood (welcome to Hollywood, what’s your dream). Or is it Bollywood? I get confused now and again. Of course, I also picture Hollywood as filled with Carole Lombards and not a bunch of over-tanned floozies, so I may be a little out of touch. But no matter, because either way you serve it up, Wine Cocktails is making a summertime hit in the land of lovelies. Not via a Greyhound bus tour, as you might expect, but via a very nice article entitled “Cocktails bring the beach home” that was in the O.C. Register. The article, by the witty and friendly Cathy Thomas, isn’t just about the W.Cs., but does have a lot of drinks from it, as well as quotes from yours truly. So, why not transport yourself by going and reading it. Right now. Or very soon after now.

PS: I fully realize that Hollywood isn’t in the O.C. But how much fun would we have just had in the above paragraph if I would have started it by saying “These days, everyone wants to go to Santa Ana?” Not nearly as much.

I (along with wife Nat) got the nicest batch of ginger snaps recently from pal Jill M (her husband, pal Ed, has a book just out called Mister Skylight that you should buy, by the way). The snaps were a bit more cookie-y than many ginger snaps (so, not crisp like some traditional ginger biscuits, and nowhere near ginger nuts, or, for that matter ginger balls. And yes, I just said ginger balls. But now my traffic skyrockets), but with goodly ginger flavor and a little bit of chewiness. I liked them lots, and ate lots of them. But then I started thinking: there is a baker’s dozen of them, maybe I should make a drink using them as a garnish? This is the way my mind works. And, I was also thinking (I have up to three trains of thought at once: right now, they consist of writing this post, thinking about a post on the comics blog Progressive Ruin that combines Adam West Batman with Dark Night Batman, and musing about how the leaning tower of Pisa doesn’t fall over) that with the holiday season you might want to know about a drink that uses ginger snaps as a garnish. Cause the snaps tend to show up this time of year.

So, I wanted a ginger-y drink, but one also with some other funtastic flavors. Which led to me playing around with this VeeV Acai (it’s a super fruit!) Spirit I’d had sent to me recently and Domaine de Canton ginger liqueur. The Veev is pretty sprightly with some tropical hints, the DdeC is very gingery and touch sweet, and at first the playing around wasn’t coming out quite right–until I added ol’ reliable, sweet vermouth. Its bit of holy herbal-ness completely rounded out the edges of the other two, and all-of-sudden I was in ginger-island-holiday-paradise. I suggest you stock up on all of the ingredients so you can get to this paradise, too (and because you may just need a drink before the month’s out. The holidays aren’t all sunshine).

1. Fill a cocktail shaker halfway full with ice cubes. Add everything except the cookie. Shake well.

2. Strain into a cocktail glass. Garnish with that cookie (I had to notch it just a bit for proper rim balancing. But after that, I did a lot of dunking with it). 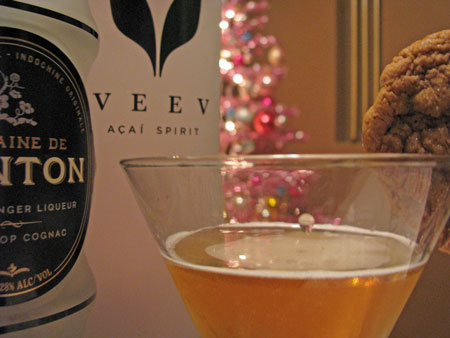 Be Sure to Save Cranberry Sauce for Your Gizmo

It’s Thanksgiving week, which means I’m too busy stretching my stomach to post much (and to anyone who says, “you don’t post much on any week” I say “go soak your head”), but I did want to remind you to save a little cranberry sauce from the big feast so you can be sure to have your Gizmo on Friday. Or Thursday night. Cause you wouldn’t want to miss out.

Wait, what, you don’t know the Gizmo? Well, it’s a dandy way to utilize those leftovers, a cocktail created for this very purpose by bar-and-kitchen-and-drug boy genius Jeremy Holt, aka, the HuksyBoy. Here’s the lowdown:

1. Fill a cocktail shaker halfway full with ice cubes. Add the gin and cranberry sauce, and syrup if using (if you’re not into the sweets, omit the syrup). Shake exceptionally well.

2. Strain into a cocktail glass. Garnish with a turkey leg. Or, for vegetarians, a hunk of stuffing on a toothpick.

A Note: Not sure about making homemade cranberry sauce? Try this (also courtesy HB): Add 1 bag cranberries, the juice and zest of 1 orange, and 1 cup sugar to a saucepan. Heat until required sauce texture is reached.

Now, you know why you need to save a little sauce. And why you should buy that Jeremy a drink next time you see him.

In honor of the two sorcerous folks who were able to say where the name “Tareva” came from in the drink “Tareva’s Tipple,” I thought I’d point you in the direction of two more drinks that have at least somewhat mystical sounding names. But first, a huge shout out to Paul de Senquisse from the blog Tears of the Night (which is in French, as Paul’s from France–that’s right, Spiked Punch is international) and to PTOR from the awesome Sanctum Sanctorum Comix blog, which is not only a blog devoted to my (and your, if you’re not square) favorite Sorcerer Supreme, but also one that features Rom: Spaceknight and the Man-Thing. That is a line-up good enough to make Stan Lee cry triumphant tears of happiness true believers. I owe those two drinks, when we’re on the same multi-dimensional plane at some point. But until then, sip on these pleasant potions picked out of the drinker’s blogosphere.

It’s Friday again (heck yeah!), and while I may be a little older this week (or, at least, have passed another birthday milestone) that doesn’t mean I’m any less bubbly at the thought of sipping the following three drinks from sweet sites that reside within what I like the call the Drinker’s Blogosphere. If you like to drink (and I know you do) then I suggest you spend some time with the following cocktails. And if you like to read (and I hope you do), I suggest checking out Alcohology’s A Lesson in Absinthe while you sip the first drink. It’s filled with good info, much of which is from the awesome absinthe afternoon the WSBG put on recently.

Are you ready for some weekend? Well, if you aren’t, you stink. No, no, I’m kidding, maybe you’re someone who actually adores the M-through-F-at-5-pm much more than the F-at-5-pm-through-Sun-night. Maybe (and maybe you’re a corporate suck up, too. No, no, I kid. You’re the tops. At least in my view. Which is, honestly, what matters at this moment). Either way, make your weekend a better place to be with one of these mighty fine mixes.

As the holidays are almost here (yay!) and as it’s snowing like the Dickens (what does that mean, by the way? I mean, Charlie D wasn’t known for his weather-creation abilities was he? And did I really just call Mr. Dickens “Charlie D?” His ghost is gonna kick my ass), who knows how many posts will find their way up on this blog in the next few weeks. But don’t fret pals, the following drinks from the blogosphere will get you through the lean times in high fashion.