Cocktail Talk: Nothing In Her Way, Part II

Just last week I talked about Charles Williams, Stark House Classic Noir, past Charles Williams’ Cocktail Talks, and broken glass in the Nothing In Her Way Part I Cocktail Talk. Don’t miss it – or be the one person on your block who missed it, and then feel bad for weeks. Weeks! And then pick up the book Nothing In Her Way (which comes with the also-swell Williams’ page-turner, River Girl). You won’t be sorry. Just check out the below quote for evidence, where the double-crosses and easy fibs are rolling already (it’s a book about conning folks, after all) as is a classic cocktail:

Was Charlie lying to me, or was she lying to Charlie? Since there was no known record of Charlie’s ever having told the truth about anything, the answer would seem to be obvious, but I wasn’t too sure. Dullness had never been one of her faults.
We sat down again, and she ordered a Ramos fizz. She was on Charlie’s side of the table, directly across from me, and when the drink came she leaned forward a little and said, wide-eyed, “I do hope you’ll help us, Mr. Belen.”

— Charles Williams, Nothing In Her Way

Cocktail Talk: Nothing In Her Way, Part I 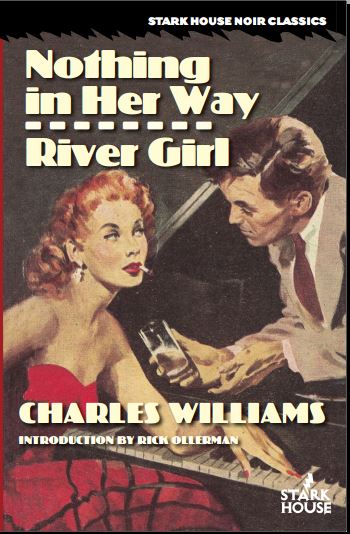 I love the Stark House Noir Classics series – thanks Stark House! They take some legendary noir/crime/mystery/all-the-good-stuff writers, some looked over, some not, pick out some of their (often lesser-available) books, and often package two books in one volume. Which is amazing! Recently, I became the proud possessor of another in the collection, a book combining two hits from Charles Williams – Nothing In Her Way and River Girl. That’s some combo!

I’ve Cocktail Talked Charles Williams before – a fair amount, go check them out – and am always happy to find a yarn of his I haven’t read (thanks again Stark House!), which is the case here times two. He’s known for his sea-set books best, perhaps, but also for his unflinching look into his characters, who all carry flaws, his usually-right-on plotting, and a couple movie adaptations, including ocean-bound Dead Calm. Neither of the books in this two-books-in-one powerhouse takes place aboard a boat on the ocean like that one (though as you’d expect from the title, River Girl includes a river), but both are worth diving in to. I liked Nothing In Her Way a bit better of the two, because it’s a grifters story, and, well, I like reading about the cons and the cons who try to con. Also, it has a number of Cocktail-Talk-able quotes, so we’re gonna feature two here, starting with the rum and accidental-glass-breaking (or is it?) number below:

It was one of those dim places, with a black mirror behind the bar, and while it was doing a good business, I hadn’t known it was that crowded. I’d just put my drink down and was reaching for a cigarette when I felt my elbow bump gently against something, and then I heard the glass break as it went over the bar. I looked down at the spreading Daiquiri, and then at him. It was odd. There’d been plenty of room there a minute ago.
“I’m sorry,” I said. “It didn’t spill on you, did it?”
“No. It’s all right.” He smiled. “No harm done.”
“Here,” I said. “Let me get you another one.” I caught the bartender’s eyes and gestured.
“No,” he protested. “I wish you wouldn’t. It was just an accident. Happen to anybody.”
“Not at all,” I said. “I knocked it over. I’ll get you another one.” The barman came up. “Give this gentleman another Daiquiri. And charge me with a glass.”

–Charles Williams, Nothing In Her Way

Tags: Charles Williams, Cocktail Talk, daiquiri, Nothing In Her Way, Part I, Rum

Cocktail Talk: Man On A Leash

Charles Williams, the hard-boiled, pulpy, mystery, thriller-y writer, has shown up on this blog before a few times in Cocktail Talk posts. With good reason, as he’s one of the best 1950s/60s writers in all the genres mentioned. I’m always pretty excited to track down one of his books I haven’t read – his plots are crisp, his language is entertaining and right on, and his characters aren’t afraid of a good drink. Recently, I picked up his book Man on a Leash, which is about a young-ish guy trying to track down what happened to his recently-murdered and very larger-than-life father, and then getting into all kinds of predicaments himself. And having a Bloody Mary or two (not the normal drink, really, for pulp-ish books). Which is the where the first quote below comes from. The second has nothing to do with drinks, but is just a darn sweet quote. I’ve begun quoting it, actually, every day at work.

‘It sounds a little kooky, out here in the sagebrush, but would you believe a rescue at sea?’ She glanced at her watch and stood up. ‘But I’ve got to run. If you’ll stop by when you get through here, I’ll hammer together a couple of Blood Marys and a bit of lunch and tell you about it.’

Brubaker got up and began to pace the office. ‘Jesus Christ, when I think that I could’ve been a pimp or a geek in a sideshow, biting the heads off chickens!

— Charles Williams, Man on a Leash

Cocktail Talk: A Touch of Death

I’ve mentioned Charles Williams on here before, but it’s high time he’s on here again, as he’s one of the pulpiest pulpers out there – at least from the books I’ve read, and I’m always looking for more. If you happen to have any old Charles Williams books, actually, and want to give them to me, I will buy you many drinks. Promise. Anyway, the book of his I’ve read most recently is called A Touch of Death, and was reprinted not long ago by the fine folks at Hard Case Crime. It features a guy who gets himself into all kinds of trouble, mostly due to a women that has been called “the toughest babe you’ll meet in fiction,” by Mystery File, and I couldn’t agree more. She is bad news, people. The below quote is good news, however.

We went up on the outside stairs at the rear of the building and in through the kitchen. She pulled a bottle of bourbon out of a cupboard and set it on the drain.

‘Mix yourself a drink, and go into the living room. Soda and ice cubes in the refrigerator.’

‘I hate to drink alone this early in the day,’ I said. ‘It scares me.’

She smiled. ‘All right. If you insist.’

–Charles Williams, A Touch of Death

I’ve only had one other Charles Williams quote on Spiked Punch, and it was only a bonus quote along with a recipe for the Zazarac. Admittedly, it is one amazing quote. Really, go read it. Or you’ll be sad. And don’t fret, I’ll wait.

Okay, that was great, yes? The below quote may not have the umph, but it’s also good, and from the book The Hot Spot, which was originally titled Hell Hath No Fury and which was, oddly enough, made into a movie with Don Johnson of the well-feathered hair. Don’t hold that against it–if you dig the noir country of fiction it’s a must read. Williams walked the same 50s and 60s noir and hard-boiled aisle as James M. Cain and Cornell Wollrich (all three I’d read all day, if it was up to me), though he has his own voice and style and particular brand of relentlessness and bleak beauty and drinks that sometimes do flow. I picked this particular set of lines, though, because it’s coming on summer and many are dreaming of sand, beaches, and escape.

And you could get away from the rat-race for a long time with that kind of money, with a brown-eyed girl on the beach somewhere in the Caribbean, sailing a cat boat and going fishing off the reefs and drinking Cuba Libres where it’s always afternoon . . .