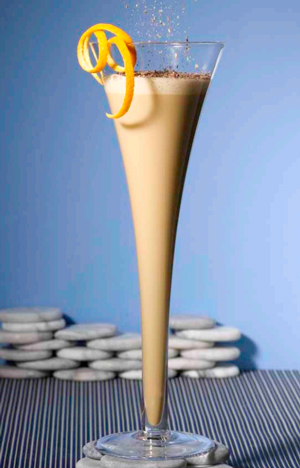 We started out our Dombey and Son Cocktail Talk-ing (be sure to read the Dombey and Son Part I post) with a little Negus and a little overview of the book, and a little Dickens chatter – heck, why not read all the Charles Dickens Cocktail Talk posts and get an even fuller story. Now that you’re back, let’s dive right in to another Dombey and Son drinking moment, or at least a drink suggestion, for someone in need of a little pick-them-up (or a large one, or many). It’s sherry and a few friends that do it – heck, you might just call it a Sherry flip, and Dickens probably wouldn’t complain as long as you made him on.

If my friend Dombey suffers from bodily weakness, and would allow me to recommend what has frequently done myself good, as a man who has been extremely queer at times, and who lived pretty freely in the days when men lived very freely, I should say, let it be in point of fact the yolk of an egg, beat up with sugar and nutmeg, in a glass of sherry, and taken in the morning with a slice of dry toast. Jackson, who kept the boxing-rooms in Bond Street – man of very superior qualifications, with whose reputation my friend Gay is no doubt acquainted – used to mention that in training for the ring they substituted rum for sherry. I should recommend sherry in this case, on account of my friend Dombey being in an invalided condition; which might occasion rum to fly – in point of fact to his head – and throw him into a devil of a state.

What I’m Drinking: The SPF (or, Silver Port Fizz)

Suns out! You know what that means? Sunburns. Okay, it means other things, too, like summer drinks and summer fun and summer romance and summer reading-in-the-back-yard-with-one-of-those-drinks. But I do pick up sunburns pretty quickly, which is why I always have sunscreen with a good SPF (sun protection factor). And also why I always have a nice chill SPF, too. For the latter, I mean a Silver Port Fizz.

Jump back! I can hear you saying (you do say that, right?), and loudly, what do you mean drinking port in summer? Isn’t port a winter, or fall at least, drink that you have indoors after a meal, say, or with some tasty cheese? Sure, it is that, but now-a-days, port is actually showing up on a lot of summer sipping menus, too. It makes sense (I think, when you think about it), because port in its various forms does deliver a lot of flavor, and doesn’t weigh one down too heavily, so when mingled with the right ingredients, I believe it’s a natural for the days when the sun is high in the sky and the temperature is also rising. Lucky for me, a bottle of Sandeman Tawny Porto 10-year-old version, showed up in the mail the other day, so I could test the port theory I’m expounding.

And while making up a new summer-y drink with port being a main player is very, very attractive (I’ll probably do it soon!), I decided to start by putting port in as a player in a classically-minded mix, the fizz. I love a nice, simple fizz, and the frothier silver fizzes (though sometimes today you see the silver slipped out of the monikers, which is okay, but here it fit perfectly), which adds egg white. And that’s what I did here, and the result is ideal for August, refreshing, fun, and full of the Sandeman Tawny’s nutty, fruit, rich-bodied brilliance. Try it, and test the theory. 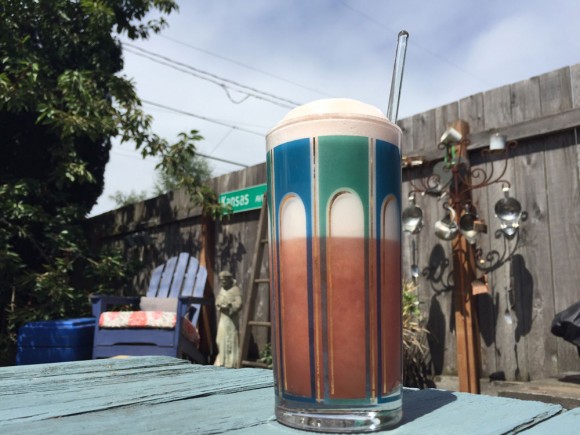 2. Fill a Collins or comparable glass with ice cubes. Strain the mix into the glass.