Our last (for now – the next time I read the book, and fates-willing there will be a next time, there may well be more) Cocktail Talk from The Old Curiosity Shop is also the longest, and it’s very long as far as Cocktail Talks go. But I couldn’t cut a word, as it highlights so well hot rum, the demon (though a man) Quilp, and his toady and lawyer Sampson Brass. Do heat it up, but don’t let said heating keep you from earlier The Old Curiosity Shop Cocktails Talk, including Part I, Part II, Part III, and Part IV, or from other past Charles Dickens Cocktail Talks.

‘No?’ said Quilp, heating some rum in a little saucepan, and watching it to prevent its boiling over. ‘Why not?’

‘What’s the matter?’ said the dwarf, stopping his hand in the act of carrying the saucepan to his mouth.

Deigning no other than a practical answer to this remonstrance, Mr. Quilp raised the hot saucepan to his lips, and deliberately drank off all the spirit it contained, which might have been in quantity about half a pint, and had been but a moment before, when he took it off the fire, bubbling and hissing fiercely. Having swallowed this gentle stimulant, and shaken his fist at the admiral, he bade Mr. Brass proceed.

‘But first,’ said Quilp, with his accustomed grin, ‘have a drop yourself — a nice drop — a good, warm, fiery drop.’

‘Why, sir,’ replied Brass, ‘if there was such a thing as a mouthful of water that could be got without trouble — ‘

‘There’s no such thing to be had here,’ cried the dwarf. ‘Water for lawyers! Melted lead and brimstone, you mean, nice hot blistering pitch and tar — that’s the thing for them — eh, Brass, eh?’

‘Ha ha ha!’ laughed Mr. Brass. ‘Oh very biting! and yet it’s like being tickled — there’s a pleasure in it too, sir!’

‘Drink that,’ said the dwarf, who had by this time heated some more.

‘Toss it off, don’t leave any heeltap, scorch your throat and be happy!’

The wretched Sampson took a few short sips of the liquor, which immediately distilled itself into burning tears, and in that form came rolling down his cheeks into the pipkin again, turning the colour of his face and eyelids to a deep red, and giving rise to a violent fit of coughing, in the midst of which he was still heard to declare, with the constancy of a martyr, that it was ‘beautiful indeed!’

The Cocktail Talks from our old pal Charles Dickens’ classic story The Old Curiosity Shop are shading towards the longish (there’s so much good stuff, I don’t want to cull or cut if I can), and as I don’t want to distract, going to keep this intro short. For more about the book, more wonderful quotes about drinks and drinking shops in the delicious Dickens style, more about how I adore Dickens, and just more more more (which you should always want), don’t miss earlier Cocktail Talks from The Old Curiosity Shop: Part I, Part II (from longer ago), and Part III (from recent ago). And don’t miss the below either (or other Dickens Cocktail Talks), where a little mild porter is consumed, and where a window is opened to holler at a beer-boy – I wish I could do that now!

As a means towards his composure and self-possession, he entered into a more minute examination of the office than he had yet had time to make; looked into the wig-box, the books, and ink-bottle; untied and inspected all the papers; carved a few devices on the table with a sharp blade of Mr. Brass’s penknife; and wrote his name on the inside of the wooden coal-scuttle. Having, as it were, taken formal possession of his clerkship in virtue of these proceedings, he opened the window and leaned negligently out of it until a beer-boy happened to pass, whom he commanded to set down his tray and to serve him with a pint of mild porter, which he drank upon the spot and promptly paid for, with the view of breaking ground for a system of future credit and opening a correspondence tending thereto, without loss of time. 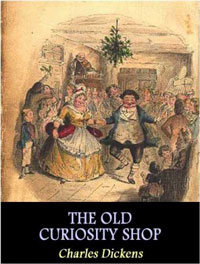 Well, this should surprise no-one who knows me in the littlest, but I’ve been re-reading one of Charles Dickens’ legendary books (that category of “legendary” covers all his books, more-or-less), as I do on regular occasions. This time, The Old Curiosity Shop, and as with every time I re-read Dickens, I found more to love that I had forgotten, re-read passages I remembered and loved, and was reminded of the glorious humorousness of Dick Swiveller, the big horror of Quilp and the lesser (though still a horror) horror of Grandfather, the sturdy Kit and his bouncy pony, the mighty small Marchioness, and of course the sweet sad Little Nell – and about a million more! Not to mention the many Cocktail Talk moments, as Dickens (I hope you know this) loved his pubs, tipples, and consumers of beverages cold and hot. Actually, I’ve had two Cocktail Talk posts from The Old Curiosity Shop already, so be sure to read Part I and Part II to start things off with the right flavor (not to mention, though I will, all the other Charles Dickens Cocktail Talks). And then come back, so you can reach this quote about the above-mentioned Dick Swiveller, one of my (many many) Dickens favs, and about “rosy wine” which sounds a bit like Pink Gin in practice!

“’Fred,’ said Mr. Swiveller, ‘remember the once popular melody of Begone dull care; fan the sinking flame of hilarity with the wing of friendship; and pass the rosy wine.’ Mr. Richard Swiveller’s apartments were in the neighbourhood of Drury Lane, and in addition to this convenience of situation had the advantage of being over a tobacconist’s shop, so that he was enabled to procure a refreshing sneeze at any time by merely stepping out upon the staircase, and was saved the trouble and expense of maintaining a snuff-box. It was in these apartments that Mr. Swiveller made use of the expressions above recorded for the consolation and encouragement of his desponding friend; and it may not be uninteresting or improper to remark that even these brief observations partook in a double sense of the figurative and poetical character of Mr. Swiveller’s mind, as the rosy wine was in fact represented by one glass of cold gin-and-water, which was replenished as occasion required from a bottle and jug upon the table, and was passed from one to another, in a scarcity of tumblers which, as Mr. Swiveller’s was a bachelor’s establishment, may be acknowledged without a blush.”

Well, it’s been a fine week (or, thereabouts. Or, my week may be different than yours. One of those) of Dickens Cocktail Talk posts, with all of them from his lesser-known, but still a book that should be on your “must-read” list, novel The Old Curiosity Shop. You know what’s funny? At least relating to the book and the Cocktail Talking? I could do, oh, at least four more posts with tipsy quotes from the book. Dickens, naturally, liked his drink a bit, and his drinkers, and his bars, and so his books tend to be dandy spots for those us who don’t mind a drink to dwell in. This last quote has to do with the devilish villain of the book, a certain Mr. Quilip, looking in at his lawyer, who is also villainous, but in a weaker and (to be honest) less admirable way. If you’re going to be a villain, at least don’t be mealy-mouthed about it. And while I can’t like him, I can’t really fault his drinking choices.

Applying his eye to this convenient place, he descried Mr. Brass seated at the table with pen, ink, and paper, and the case-bottle of rum – his own case-bottle, and his own particular Jamaica – convenient to his hand; with hot water, fragrant lemons, white lump sugar, and all things fitting; from which materials, Sampson, by no means insensible to their claims upon his attention, had compounded a mighty glass of punch reeking hot; which he was at that very moment stirring up with a teaspoon, and contemplating with a look in which a faint assumption of sentimental regret struggled but weakly with a bland and comfortable joy.

If you didn’t read The Old Curiosity Shop, Part I, you might want to, or just check out all Charles Dickens Spiked Punch posts. Cause I don’t want to take a lot of pre-amble, as this post will have a quote from that classic book, as well as a recipe that relates to the quote (cause I like to have Friday Night Cocktail recipes on Fridays, and wanted to somehow tie it all together. Make sense?). So, here’s the Cocktail Talk, Dickens’ style.

Presently he returned, followed by the boy from the public house, who bore in one hand a plate of bread and beef, and in the other a great pot, filled with some very fragrant compound, which sent forth a grateful steam, and was indeed choice Purl, made after a particular recipes which Mr. Swiveller had imparted to the landlord at a period when he was deep in his books and desirous to conciliate his friendship. Relieving the boy of his burden at the door, and charging his little companion to fasten it to prevent surprise, Mr. Swiveller followed her into the kitchen.

Now, to follow that up, here’s a recipe for Purl from Good Spirits, so you can make your own to sip on while reading Dickens on a cold spring night. Or, to have with friends while you’re acting out scenes from your favorite Dickens’ books. This is something you do, right?

1. Add the porter, ale, and ginger to a small saucepan. Heat over medium-heat, until warm but not boiling.

2. Carefully pour the porter-ale mixture into a pint glass that has been slightly warmed (by running it under warm water).

3. Add the gin. Stir once with a spoon. Sprinkle the freshly grated nutmeg over the top.

Hey, readers of this blog, you should know this: I’m a big fan of Charles Dickens. Heck, there are a couple Charles Dickens Cocktail Talk posts on here already (as well as a few other odds and sods related to him). He had the stuff, in my opinion. And, so I regularly re-read him, and recently did such with The Old Curiosity Shop. Not my top Dickens pick – not sure what is, really – but still awesomely awesome (I wonder what he would say if someone referred to him that way, way back when). And full of the lovely cast of Dickensian characters, good, bad, really bad, silly, stupid, wonderful, and tipsy. Of course, the latter are what we’re focusing on here. And the book is so filled with good drinkerly quotes that we’re gonna do a whole week of them! Or more. Who knows? Only me, Dickens, and the pony. This first quote’s from the early parts of the book, and makes some true points on soda water and human hair.

He began by remarking that soda-water, though a good thing in the abstract was apt to lie cold upon the stomach unless qualified with ginger, or a small infusion of brandy, which latter article he held to be preferable in all cases, saving for the one consideration of expense. Nobody venturing to dispute these positions, he proceeded to observe that the human hair was a great retainer of tobacco-smoke, and that the young gentlemen of Westminster and Eton, after eating vast quantities of apples to conceal any scent of cigars from their anxious friends, were usually detected in consequence of their heads possessing this remarkable property.