What I’m Drinking: On the Road to Montefalco

Usually, I try not to have favorites in booze categories. Meaning, I wouldn’t say I have a favorite gin (I like too many, too well), or amaro, or vermouth. Or white wine. However, I might say I have a favorite red wine (other red wines, please turn away now). Or, at least a favorite red wine grape, that being Sagrantino. Growing only around Montefalco, in Umbria (lovely town, by the way, the Falcon’s Mount, also referred to the balcony of Umbria, and worth a visit – great churches, great museum, a few mummies, and more, and the wine, naturally), real Sagrantino di Montefalco uses 100 percent Sagrantino grapes, is aged 37 months at the shortest, and has a deep, rich, color (dark purple) and taste of dark stone fruits. Memorable stuff!

But here’s something I recently found out (thanks to a bottle coming my way). There’s also a Montefalco Rosso wine. It’s a bit like Sagrantino’s more playful younger sibling. Aged just 18 months and blended with 60-80% Sangiovese. The specific bottle I tasted was Tenuta Alzatura Montefalco Rosso, which is 70% Sangiovese, 15% Sangrantino, and 15% Merlot. It’s a beautiful wine, with a light ruby coloring, and also a lighter nature than Sagrantino, probably more approachable for a larger percentage of people, with a fruity nature (red fruit, juicy ones), and hints of spice on the nose and taste, but with a softer finish than its sibling. A nice red wine for a late-summer or fall day. And also, a nice one for making into a wine cocktail.

Of course, as you know, I have a hard time not experimenting with any ingredient I have at hand, and while a glass of this Montefalco Rosso by itself is dreamy, it plays well with others, too. Here, I brought in some Italian favorites, starting with light, slightly citrus, aperitif, Aperol. To match up with that and to balance some of the wine’s fruits, a few dashes of Fee Brothers Orange bitters added to the party – not Italian, but we do have another Italian fav, too. See, I wanted some strong undercurrents, too (sometimes in fall there’s a chill in the air), and wanted to stay Italian-style, and so brought in an underutilized cocktail ingredient: grappa. Specifically: Marolo Grappa di Amarone, which is aged in oak, and which has cherry notes, along with an adaptable nuttiness, that go with the wine perfectly. Altogether, this is a cocktail that’ll have you fantasizing of Italy – and savoring every sip. 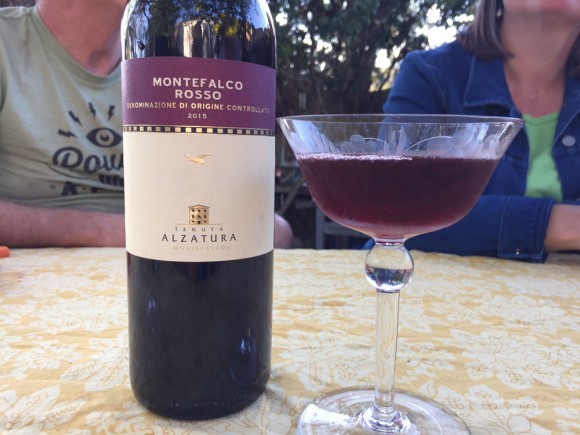 On the Road to Montefalco 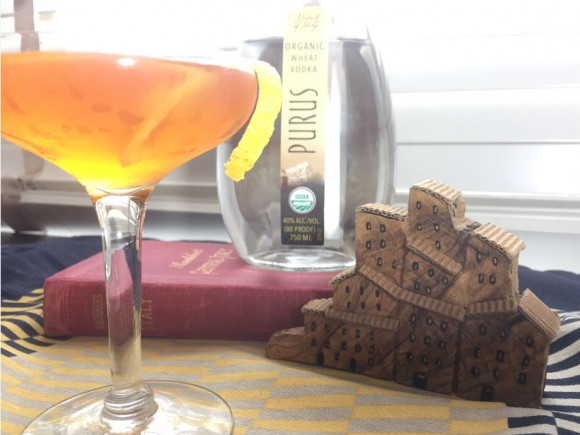 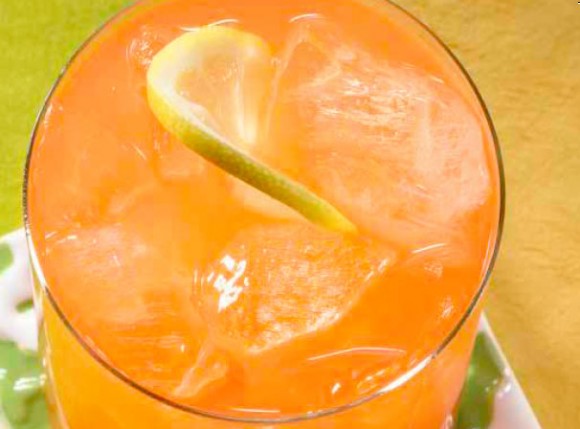 What I’m Drinking: The Burst of Feeling

This is a globe-trotting flavorsome sipper, which actually uses ingredients from three different continents. Really! I think. Tell me if I’m wrong, but I think I’m right, though with the teutonic shifting, well, you never know what’s changed in the many years since my geography classes. What I do know is that it’s a swell mix, thanks in large part to the addition of Bundaberg ginger beer (some of which, lucky me, showed up in the mail not too long ago. Don’t hate me cause I’m lucky). Out of Australia, Bundaberg makes a variety of tasty beverages, but is at the moment best known for its ginger beer, a n/a version made from all-natural nature-y things (roots, spices) and being a very smooth drink, with a hint of sweet and good underlying gingerness. Here, I pair it with two other flavorsome friends: Peruvian brandy Pisco, and a little Euro insertion thanks to old chum Italian aperitif Aperol. As a trio, at first glance, they may seem oddly matched, but everything brings a little this, a little that, a little of their own personality. Lots of flavor, while still being refreshing. 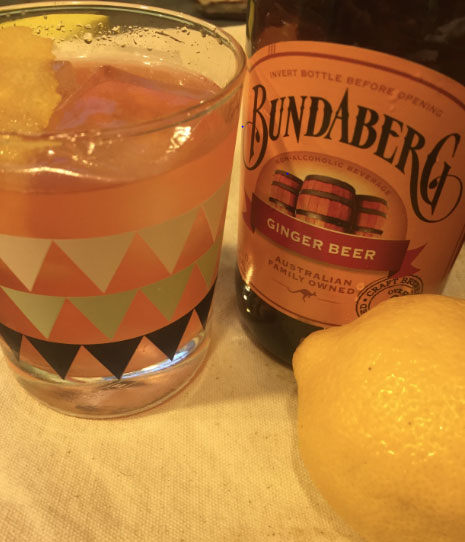 The Burst of Feeling

1. Fill a cocktail shaker or mixing glass halfway full with cracked ice. Add the pisco and the Aperol. Stir well.

2. Fill a smallish highball or a good-sized Old Fashioned-y glass three-quarters up with ice cubes. Strain the mix from Step 1 into the glass.

3. Top with the Bundaberg. Stir well. 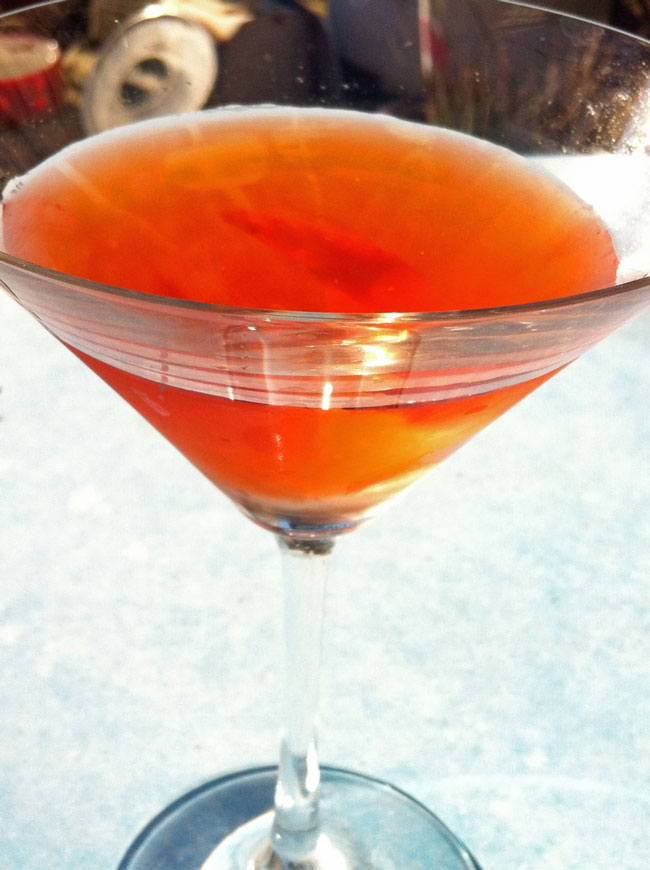 PS: Special thanks to AK Translation Services for the immaculate translating.

The ol’ Seattle weather recently hasn’t been what you’d (you or anyone, really, unless that other person is someone who revels in dreary wetness) call awesome lately (and by lately, I mean, to all reports, since last August). You might think this rain-cloud-rain pattern would drive me to drink only straight shots of rot-gut (or at least straight shots of almost-rot-gut). But no, fair friend, no. When the weather trots out its worst repeatedly during a time when the very month name should signal clear skies and sunshine (like May, for instance) I go for summertime mixes. A: I’m not going to let that weather tell me who the boss is. I know who the boss is (Tony Danza. And then me). B: I figure if I drink like there’s sun in the sky then maybe, just maybe, I’ll influence said weather to follow my lead. Here’s hoping, at least. Which is why I’m sipping the summertime queen of the jungle, the Ognam (which is straight of out Dark Spirits, don’t you know. Wait, you don’t? Well go buy the book and find out). It was created by wife Nat and has a tropical refreshing vibe (sure, I said vibe, what of it?), and can, if anything can, change the weather: 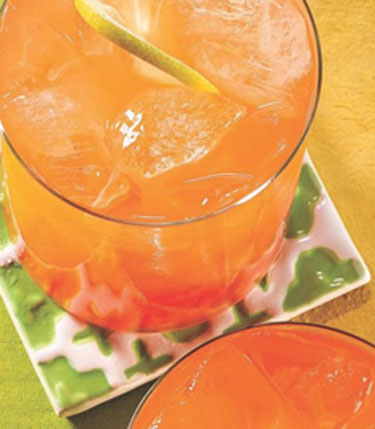 2. Fill the glass almost to the tippy top (Ognam insists on words like tippy top. Don’t infuriate Ognam.) with club soda. Stir again, well. Squeeze the lemon slice over the glass and drop it in.

This vacationing vandal special is, in a big way, a liquid shout out to pals Markie B and Andy S. See, these two fine gentleman (and their wives) came with us the last time we were in Italy (way back in April 2009), and during that trip we discovered the somewhat illusive Viparo. You can read my plea for this Italian amaro here, and learn more about our adventures on that trip. On this trip, I was excited to try and track down this evasive elixir, and then when walking into some big new market/grocery/superstore a couple weeks back there it was, staring down at me–a whole display of new bottles of Viparo. Naturally, I picked one up and now it, along with Italian stalwart Aperol, features big in the below drink. The others players are gin (which starts the story behind the name, as I was picturing the drinker as a British stagecoach robber on vacation) and clementine juice (I found a bunch of clementine’s recently)—everything together equals a fine escape: 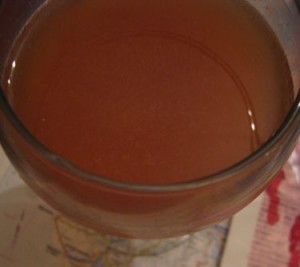 2. Strain into a cocktail glass or little wine glass or flagon. Drink up.

A Note: Can’t find clementine’s? You could sub in orange juice instead. Call it Highwayman’s Parole.