Our trip (we’re taking it together, I feel) through some of the Charles Willeford oeuvre, via Willeford Cocktail Talks, is almost done, and ending with a second from the Floridean funky mess (among other things) Made in Miami, originally called Lust is a Woman, which isn’t actually as good, or as accurate, a title in my mind. You’ll need to read the book to see why! And also read the Made in Miami Cocktail Talk Part I, if you haven’t. You’ll dig it. The below quote isn’t drink specific like many of the Cocktail Talks we have here, but is a great view into bartenders of a certain time period. Or perhaps how some people view or viewed bartenders. You decide.

Ralph sat down on the bench to smoke while he waited for Tommy. Two bald middle-aged bartenders entered the locker room from the back and began to change their clothes. Ralph examined their dour faces with the dawning realization that all of the bartenders he had ever known looked exactly like these two. Not that they were all bad, although most of them were, at that, but their expressions were all alike. All faces, like character actors in the movies; expressive eyebrows, small chins, and large liquid eyes. Ralph pictured these two men later working behind the bar, changing their expression to match the mood of each customer at the busy half-price cocktail hour in the Rotunda Lounge. But right now, in repose, their characterless expressions oddly reminded Ralph of the ex-Presidents born in Ohio.

–Charles Willeford, Made in Miami

Tags: all of the bartenders he had ever known looked exactly like these two, Bars, bartenders, Charles Willeford, Cocktail Talk, half-price cocktail hour in the Rotunda Lounge, Made in Miami, Part II

Cocktail Talk: Made in Miami, Part I

The earlier Cocktail Talks from the Charles Willeford book Pick-Up (read Pick-Up Part I, and Pick-Up Part II if you missed ‘em) alluded to me diving into the Willeford canon lately – deeper, that is, than the Hoke Mosely books I do so love (read all the Willeford Cocktail Talks to learn more). The dive included the dark, really, lesser-known book Made in Miami, which is a fast-paced, hotly-focused, a bit (for the times, and maybe even now, in inflection) saucy and tawdry, and finally fairly bleak look into a shady side of Miami. If that sounds intriguing, it’s well worth tracking down. And it has – it’s hot in Miami – some nice cocktail talking.

Maria unzipped her dress at the back and carefully slipped it over her head. She draped it lovingly over the foot of her bed while she looked for a coat hanger in the closet. It was the only really decent dress Maris had brought with her and she took excellent care of it. The silk dress was much too good to wear in a Rotunda Room full of women while she drank Tom Collinses at sixty-five cents apiece, the waiter expecting a dime tip every time he brought another round.

–Charles Willeford, Made in Miami

Decided on thinking it through that I needed one more quote from Charles Willeford’s one-time underground classic (still classic, just not really “underground” as you can pick it up easily enough, and you should), Pick-Up. Be sure to read the Pick-Up, Part I Cocktail Talk, and then come back – if you already haven’t read it, that is – and catch the below quote, about a drink called The Dolphin Special. Which I’ve never seen on a menu, but which sounds pretty neat, and boozy.

“Just bring us two of the Dolphin Specials,” I told him
He nodded solemnly and left for the bar. The Special is a good drink; it contains five varieties of rum, mint, plenty of snow-ice, and it’s decorated with orange slices, pineapple slices and cherries with a sprinkling of sugar cane gratings floating on top. I needed at least two of them. I have to build up my nerve.

All of you long-time readers of this Spiked Punch know that I am very fond of Florida’s finest crime writer (may he rest in punch-y peace) Charles Willeford. Especially of the Hoke Mosely books, but recently I also dived back into some others of the Willefordian back catalog. And a fruitful dive it was, full of the Willeford pacing, declarative brilliance, short and concise writing and insights, and a general dark noir-ish quality – though not all fit that definition perfectly. Pick-Up, a worthy read and then some, for example, is more about art and love in a way, and drinking in a bigger way, and a mood, in a way, and suicide, than the criminal and police-ical. Lots of cocktail talking, as you might expect, in Pick-Up, including the below allusion to hot gin punch. Good to remember, not only is it the holiday season, but the cold and flu season.

I fished the two one dollar bills out of my watch pocket and smoothed them out flat on the counter.
“I think I’m getting a slight cold, Mrs. Watson,” I said, coughing into my curled fist, “and I thought if I made a little hot gin punch before I went to bed it might cut the phlegm a little bit.”
“Nothing like hot gin for colds.” Mrs. Watson smiled and got out of the chair to cross to the liquor shelves. “What kind?”
“Gilbey’s is fine – I’d like a pint, but I don’t think I have enough here . . .”

Oddly (as odd as snow in Miami, some might say), though I’ve mentioned my gushing affection for the Hoke Mosely books by Charles Willeford (and how I wish there were more, and how the non-Hoke Willefords are swell, too), I’ve never had a Cocktail Talk post from the very first one, Miami Blues, which is I suppose the best known, due to a movie made (a pretty good movie, too, featuring a very young Alec Baldwin as our young psychopath and a fine Fred Ward as the hero-of-sorts Hoke). I need to watch it again, now that I think about it! The book’s great, too, greater, really, with no shade thrown on the movies. Books are just better! Hoke, as shown below, has a love of Early Times, which I also like. Here’s what you should do – take a Saturday and read the book, then watch the movie, all while drinking Early Times. That’ll be a day to remember!

Hoke took one of the Manila envelopes out of his leisure jacket pocket and counted out $100 on the bar. He pushed the money across to Irish Mike. “Take care of my tab, and leave what’s over as a credit.”
“Your credit’s always good here, sergeant. You know that. I’ll just check your tab and give you back the change.”
“No. Leave it. I want to see what it feels like to have a credit for a change. Early Times. Straight up. Water back.”
“Similar,” Henderson said. 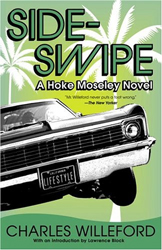