This is one of those moments where I wonder about my own sanity. I woke up this morning, and thought, “I’ve never had the Bijou recipe on the ol’ Spiked Punch blog. And the Bijou is one of my all-time favorites, at least in the top 20, or 25, somewhere in that range for sure, and a drink I travel back to again and again because of its balance and herbal-spice-nice combination, and cause it’s called the Bijou for Bruce’s sake, and what am I doing not having it on the blog?” So, I thought all that, got up, and instantly made myself a Bijou. You should do the same. 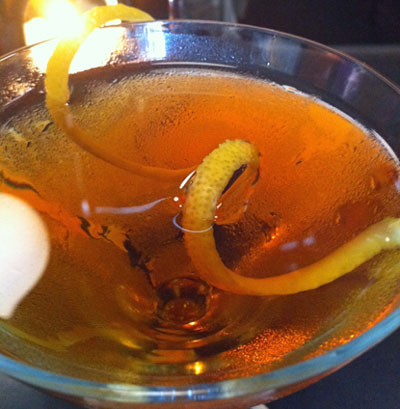 Cracked ice
1 -1/2 ounces gin
3/4 ounce green Chartreuse
3/4 ounce sweet vermouth
Lemon twist, for garnish (sometimes this is skipped, but I sorta like it)

I recently was talking to a friend, and they mentioned that they didn’t like Chartreuse. I was flabbergasted. I didn’t, like, knock them over the noggin with a three-legged stool or anything, but I did decide then and there to never talk to them again (okay, maybe not – but that would have been sorta great). I also decided to go right home and make myself a Chartreuse Daisy, in honor of the lovely herbal French liqueur/aperitif that had been maligned by my one-time friend. I think you should do the same. We certainly don’t want Chartreuse to feel bad, after all. 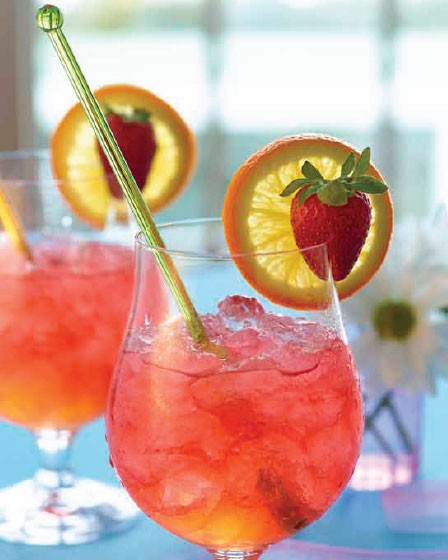 2. Fill a goblet three-quarters up with cracked ice. Strain the mixture over the ice. Stir briefly. Float the Chartreuse over the ice, and stir again briefly. Garnish with the strawberry and the orange slice.

Way way back where here on this here blog, I posted some (though no one, I hope, would say too much) about the fine, fine collection Everyday Drinking by Kingsley Amis. If you’re interested in writing about drinking, or drinking, or reading, or any of those things jumbled up as in a blender in some way, then I strongly suggest you read said collection. But also check out Mr. Amis’ novels and such, cause they’re darn fine as well. And sometimes have amazing Cocktail Talk-ing going on, like in the below.

Cocktail Talk: The Scent of Murder

Though this book was eventually (and is, I suppose) better known as The Gracie Allen Murder Case, and made into a movie of the same name (starring, wouldn’t cha know, Gracie Allen), I love it that my copy is still called The Scent of Murder. Called such because at least three characters work in a perfume factory. I also love that the crime solver is named Philo Vance (played in the movies of course by William Powell, who plays a cocktailing and high class mystery solver better than anyone), and that he’s a bit of a dandy, though tough, too, but with a thoroughly rich, East-Coast-or-English, knows-his-wines-and-colorful-waistcoats-way about him. Really, though people die, this is a somewhat lightly and bubbly read. All that alone would lead to me wanting to drop this quote down for you. However, the real reason is that I think it should inspire you to sip some Chartreuse this weekend (I can’t think of better advice to give).

We had finished our coffee and were sipping our Chartreuse when Sergent Heath, looking grim and bewildered, appeared at the door leading from the main dining room to the veranda, and strode quickly to our table.