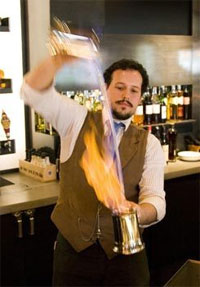 It’s always nice to see a quality bartender (and, in this case, pal) get a little public recognition, as Andrew Bohrer does in this Seattle Times article about the new Chantanee/Bar Naga combo. And if I did write about them a little earlier (here), then all the better. A good bar needs all the public words about it that are possible, so that people find their way there, take advantage of the tasty cocktails, chat up the friendly bar staff, eat snacks, be merry, dance around a bit, and then tip accordingly and stumble home. That’s just makes the world a better place, friends. Oh, as a side note, when I myself was at Chantanee/Naga last Friday, Andrew did indeed toss around a Blue Blazer like in the picture (said picture taken by photog Baydra Rutledge–go Baydra!), as a remedy for my cold, and as entertainment for patrons. It was a kick, and went down divinely. I felt better almost immediately. At least by the second one. Now, go read that article.

Though the actual opening day of new Bellevue hotspot (well, soon to be. And I mean “hotspot” in the good way, and not the overly ironic condescending way that I might use it usually) Chantanee is today, I was lucky enough to be able to slip in last weekend, to check out the bar set up by bar manager, WSBG officer, pal, and Cask Strength blog writer Andrew (that’s Andrew Bohrer, by the way, and not Andrew Friedman, Liberty Bar owner, WSBG officer, pal, and Alchohology blog writer, though admittedly it does get confusing having them both here in Seattle. It’s a nice confusingness, since they’re nice fellas, but I’ve started thinking they need nicknames to differentiate them more easily, like big Andrew and little Andrew, but that seems a bit, derogatory, somehow, and so I think I’m going to start calling them “Bohrer!” and “Friedman!” loudly, in a Sgt Schultz kind of accent). And, I must say, I was darn impressed by the set up, and overwhelmed by the in-depth and tasty amount of booze and accoutrements. I think they have like 10 choices or more each of rye, bourbon, and gin, enough liqueurs to have a hot-tub party in, and lots of bitters, tinctures, and more. Fun stuff indeed. I suggest, even if you have a Bellevue aversion (I’m speaking to those Seattleites who don’t travel well, or are afraid of water, or what-have-you), that you get off the couch and make your merry way out to test the drinks your-own-self, and soon, because not only is the bottle line up worth bowing too, the drink menu is also swell, with a balance of classic and new cocktails (though the full drink menu may not be in effect quite yet). I took a couple quick pics (and was lucky enough to be having the preview with the always fun DrinkBoy Robert Hess as well as the affable Amanda, one of the Naga bartenders), so you can get the feel of the place, and be tempted–and jealous.

Here’s a view of the whole bar, with all those bottles whispering “drink me, drink me,” and of Mr. Hess taking a picture of the bar. As I take a picture of him. Whoa, that’s sorta deep: Here’s the drink Andrew whipped up for me, a Cat’s Pajamas (notice the ice ball, which was a very cool touch. Also, notice the way I used “cool” both to denote style and temperature): 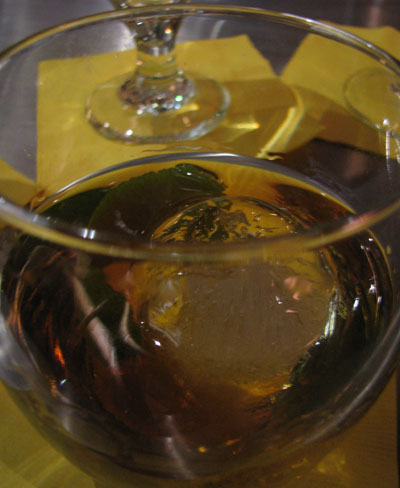 And here’s Andrew (a bit blurry, but hey, I was drinking and snapping all at once), enjoying the bar manager’s prerogative (which in this case was a Manhattan accented by homemade brandy’d cherries): 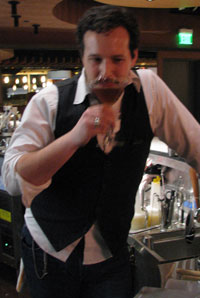