The great Graham Greene hasn’t made an enormous amount of time Cocktail Talking here on the ol’ Spiked Punch (though do the read the past Graham Greene Cocktail Talks), which is a shame because A: I like his works lots, and B: he liked a good drink. Probably because we shade a little lower-brow (though he did write a fair amount of what he called “entertainments” which might lean into pulp pockets perfectly), or just because I forget to mark the pages of potential Cocktail Talks when reading his books. Or re-reading, I should specify, as I believe I’ve read them all at least once, re-reading being the case recently as I was re-reading his book The Comedians, which takes places mostly on Haiti during the tragic reign of François “Papa Doc” Duvalier. Circling around one main character and a few main satellites characters (who meet on a boat heading towards the country), it’s a sometimes chilling, always moving novel. Definitely one that one should be read, especially if you carry an interest in political history around like a traveling bar.

“Have you a whiskey?”

“I have next to everything, old man. You wouldn’t fancy a dry Martini?”

I would have preferred a whisky, but he seemed anxious to show off the riches of his store, so, “If it’s very dry,” I said.

He unlocked the cupboard and drew out a leather traveling-case – a half-bottle of gin, a half-bottle of vermouth, four metal beakers, a shaker. It was an elegant expensive set, and he laid it reverently on the tumbled table as though he were an auctioneer showing a prized antique. I couldn’t help commenting on it.

“As good as,” he replied quickly and began to mix the cocktails.

Not a lesser novel in the whole scope of the novel form, but perhaps considered a lesser Graham Greene novel, Travels with My Aunt is even with that brief and not-awe-inducing intro phrase a worthy read. In a nutshell: slightly boring chap takes early retirement to be slightly boring, but then runs into his “aunt” who is an eccentric traveler and jolly woman, who then takes said chap (Henry Pulling is his name) on adventures and opens his eyes to the world – and unveils family secrets? I won’t give it away – and more travels ensure until it turns out early retirement maybe is much more fun than expected. A good summertime read, and as it’s still summer, jump in (also, it was made into a movie, which is a good summertime watch). But first, the below quote, which is a bubbly favorite. As I’m drinking bubbly right now (you’ll understand this sentiment when you read the below), I feel I have to tell the truth and admit: I’ve had this quote on the blog before. but it’s so good, twice is twice as nice!

— Graham Greene, Travels with my Aunt 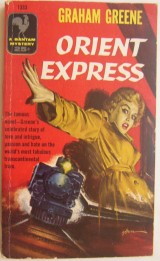 You’ll be forgiven if you dive in here thinking, automatically, that they’ll be a murder and a portly Belgian detective within this here Cocktail Talk, cause m’lady Christie’s book that shares the two words of the title is rather a big deal, but nope! Today, we’re Cocktail Talking with gregarious Graham Greene, which is also rather a big deal of course. But while his Orient Express isn’t the best known, or most highly thought of, book within Greene’s healthy and unmissable canon, it was the first of his (to use his own phrasing) “entertainment” books, and one written specifically with the movies in mind – though it begs, in many ways, for an updated film or tv treatment as there isn’t a good one that I know of. While not the top of the Greene list, the book’s a rollicking read in many ways, dated in some ways here and there, but moving at a fast clip, and with characters you begin to really care about, or, if that’s too fancy, become involved with, their stories, that is, and a few you might be happier to do without. Read it, if you haven’t, to see if you agree. And for now, enjoy the below drunkenness.

Miss Warren’s mood changed. She straightened herself and barred the way. ‘You say I’m drunk. I am drunk. But I’m going to be drunker.’

‘You are going to have one more drink with me or I shan’t let you on the platform.’

Janet Pardoe gave way. ‘One. Only one, mind.’ She guided Mabel Warren across a vast black shining hall into a room where a few tired men and women were snatching cups of coffee, ‘Another gin,’ said Miss Warren, and Janet ordered it.

I recently re-read (for the, oh, let’s say, fourth time) Graham Greene’s classic short post-WW-II Vienna thriller The Third Man. It was written specifically to be made into the (possibly) more classic movie of the same name, and is entirely worthwhile. And a quick read, too, as it both keeps you on the edge of your reading chair or couch – as you, along with the amazingly-named Rollo Martins, unravel the mystery of Harry Lime – and because as mentioned, it’s short. It also has a couple of neat bar scenes. I especially like the description below.

After he left me, Martins went straight off to drink himself silly. He chose the Oriental to do it in, the dreary smoky little night club that stands behind a sham Eastern façade. The same semi-nude photographs on the stairs, the same half-drunk Americans at the bar, the same bad wine and extraordinary gins – he might have been in any third-rate night haunt in any other shabby capital of a shabby Europe.

As the political, um, talk is reaching its election-year-in-January proportions (talk which I’m sure by the actual election will reach astronomical asinine-ness), I thought I’d throw in a Cocktail Talk quote from Graham Greene. It’s not, however, specifically about politics, but it seems relevant. It’s not, either, from one of my favorite books by Mr. Greene (who is of course super-fan-tabulous), but from a perhaps lesser novel called Travels with My Aunt. The fact that it’s one of his books makes it better than most books on the top seller list, however. But, to get back to politics. And booze. The reason this quote seems so perfect for an election year goes back to a thought I once had (and if anyone says “the one thought you ever had,” well, good point), that if we could see those fight’n politicians after a few glasses of bubbly we could probably find out more about them then listening to any ol’ debate. Which leads to this quote, which I might use as a slogan if I ever run for office:

–Graham Greene, Travels with My Aunt

Cocktail Talk: Our Man in Havana

First, an apology for the lack of posting. Moving back to Seattle from the I-tal has been a process, and has left me with little umph for blogging. Or, after reading (re-reading really, as I’ve read it at least once, and probably twice, before) Graham Greene’s somewhat funny/somewhat serious Cuban spy-and-not novel Our Man in Havana, I’ve been too inclined to have a daiquiri at noon for blogging. I like that take on things much better, so let’s go with that excuse, and start a rumor of me being a two-daiquiris-at-noon fella. Heck, maybe I’ll even inspire you to start. If I don’t, hopefully this quote does (or starts you collecting miniature bottles of whiskies):

‘Eighteen different kinds of scotch,’ the stranger said, ‘including Black Label. And I haven’t counted the Bourbons. It’s a wonderful sight. Wonderful,’ he repeated, lowering his voice with respect. ‘Have you ever seen so many whiskies?’

‘As a matter of fact I have. I collect miniatures and I have ninety-nice at home.’

‘Interesting. And what’s your choice today? A dimpled Haig?’

‘Thanks, I’ve just ordered a daiquiri.’

‘Can’t take those things. They relax me.’

—Our Man in Havana, Graham Greene