It’s been 8 years (!!!) since I had the first Cocktail Talk from the George Simenon book My Friend Maigret – which, if memory serves (sadly, it doesn’t serve as well as it once used to, hahaha), was the very first Inspector Maigret book I ever read, after picking up three at once at the now-much-missed Seattle Library Book Sale. Since, I’ve taken many a stroll with the taciturn-at-times slow-moving-at-times always-large always-interesting Maigret, and look to take many more, though my collection is getting nearer and nearer to full. What a treat to go back and read this yarn, which falls into the category of Maigret-outside-of-Paris in the main (there are a number of these, though not as many as in the city proper I don’t believe), as he and a tag-a-long Scotland Yard Inspector (in France to watch the famous Chief Inspector’s methods) end up on the Island of Porquerolles to solve the murder of an ex-con who had been bragging in one of the local bars (where they spend a fair amount of time, drinking the local white wine mentioned below) about his friend Maigret. There are many Cocktail Talk moments as usual with Maigret, don’t miss My Friend Maigret Cocktail Talk Part I’s anisette (and for that matter, check out all the Maigret Cocktail Talks), but the below has both the white wine and marc, the latter always a welcome addition.

“Did he go steal jewels in New York?”

“I rather think he’s in Paris,’ Mr. Pyke corrected him calmly, selecting a toothpick in his turn.

A second bottle of the island’s wine, which Jojo had brought without being asked, was more than half empty. The patron came over to suggest:

“A little marc? After the garlic mayonnaise, it’s essential.”

It was balmy, almost cool in the room, while a heavy sun, humming with flies, beat down on the square. 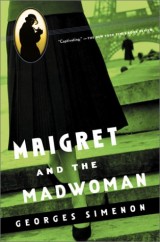