Robert Bloch was a well-known writer, novelist, short-story-ist, pulper, and though he wrote a fair amount of crime fiction, his best known work is Psycho, which as you could probably guess was the book made into the famous Hitchcock film. He started, interestingly enough, as a student of the legendary brain expanding horror master H.P. Lovecraft, even. Wowsa! But here we’re taking a nice quote from a crime novel, Spiderweb, which was originally an Ace Double, meaning a book from well-known pocket-book publisher Ace that actually contained two books – whatta deal! Here, it was with David Alexander’s The Corpse in My Bed. Though I don’t have that book (I might like to have it!); instead, I have a modern reprint of it from the happening folks at Hard Case Crime. Here’s the ringer: said modern reprint is also a twofer, combining Spiderweb with another Bloch book, Shooting Star. Get it! And enjoy the short quote below, which I thought would fit nicely with the last Friday Night Cocktail, I Should Classicoco, as they both have an apricot component.

’Your order?’ I looked at her. Then, ‘two apricot brandies.’ She slid into the booth across from me and she smiled.

What I’m Drinking: The Saké’d Saint

Wowsa, it’s been many a moon since I’ve had this charmer (which featured prominently along with 49 other beauts in Wine Cocktails). As you might expect from the title, it uses saké (which, admittedly, makes it an interesting fit in Wine Cocktails, but a delicious one, and those were interesting times, good times, for sure, but interesting if you know what I mean, and I’m sure you do). I like a slightly dry saké here, by the way, but really, most decent versions are gonna make a swell drink, a drink highlighted by the inclusion of coromandel gooseberry, better known as Star Fruit and also known as kamranga or five- finger fruit. All of which makes me want more names (A.J. Rathbun, better known as drinkaranga), and another one of these. 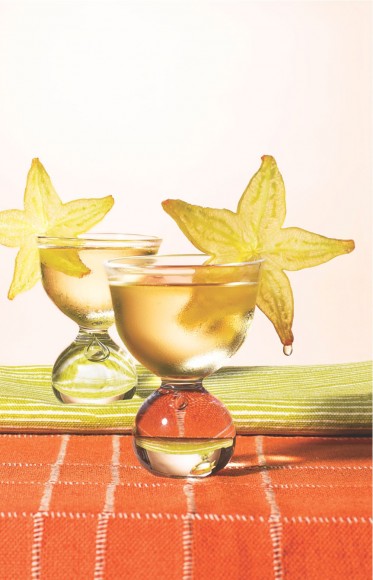 3. Strain through a fine strainer into a cocktail glass. Garnish with the second star fruit slice.

Take your New Year’s Eve party up a notch (if that’s possible–knowing the readers and pals I have, your New Year’s Eve parties are already notched up so high the belt might break. But even so, you still might like a new New Year’s bubbly beauty) with the Valencia, a drink I think sounds like it refers to an old, but somewhat shadily classy, apartment house, probably a brick brownstone, where the serious parties have happened, are happening, and will continue to happen as long as we’re lucky to walk and drink on this earth. Valencia the drink contains a captivating combination of apricot brandy, orange juice, orange bitters, and Champagne or sparkling wine (the latter being why it’s so fitting for the last day in December). In the below video, which is posted via the fine folks at How2Heroes (a site you should check out if you like drinking and cooking videos) you can see me making one of these sparklers.

If that’s not enough, and if you really want to start your New Year right (or oddly), check out this video of me (also from How2Heroes) talking about how I got into cocktail love and booze-writing and all that liquor madness. I’m also wearing a pink tie and straw hat and name dropping the Essential Dr. Strange Volume I.

And if that’s not enough, know that I’m wishing you, from a distance, if not in person (though I wish I was), the happiest and most wonderfulest 2009 imaginable. And then some. Cheers!