It was recently my anniversary (thank you to my wife for marrying me!), which seemed the perfect time to re-read the 1944 mystery by George Harmon Coxe (a fairly well-known mystery writer from mid-last-century) called The Groom Lay Dead! It’s a nicely-paced (not breath-takingly-paced like Day Keene, but it keeps things moving) mystery around the death of a somewhat asshole-ish rich guy, with our protagonist being a slightly shell-shocked (this the WW II era) play director. So, there’s glamorous folks, an interesting upstate New York Finger Lakes setting, a few potentially shady (or moreso!) potential murderers, as well as a sort-of cult-ish health farm run by a hypnotic man – always a good addition. Worth checking out, especially if you can get the cover pictured here. I had a The Groom Lay Dead Cocktail Talk on here after the first time I read it, many years in the past (do, don’t miss that, ya’hear?), but I’d forgotten about this minor character I liked, and felt he (George Vernon, vaguely trapped up the health farm/cult) and his night out deserved a second Cocktail Talk quote.

Apparently it had been quite a while since George Vernon had been out and he’d made up his mind to enjoy himself. He had four drinks at the bar in addition to the two he’d had at Yager’s house: he had another Scotch and soda with his dinner and called for brandy with his coffee. Parks was doing all right, too. He got a lot of laughs of Vernon, who long ago had insisted that we call him George.

Don’t go thinking I decided to have a second Cocktail Talk from George Harmon Coxe’s The Crimson Clue because of the rhyme between “clue” and “two,” though admittedly that’s a bonus. But this 50s Kent Murdock (news photographer by day, murder solver by night)-starring read had too many Cocktail Talk moments to not highlight another one. Oh, if you missed The Crimson Clue, Part I, where I talk a bit more about the book, and have another nice quote, then I suggest trotting back in time to catch up. Caught up? Nice. That means you probably need a drink, and if you’re tired of bubbly like our man Kent, then the below will fit you like good shoes.

Elliott tapped the empty glass. “How many of those have you had?”

“Then how about a real drink? A Scotch?”

Elliott called to a passing waiter, asking him to bring two Scotch and sodas to the library.” Mostly Scotch,” he added. 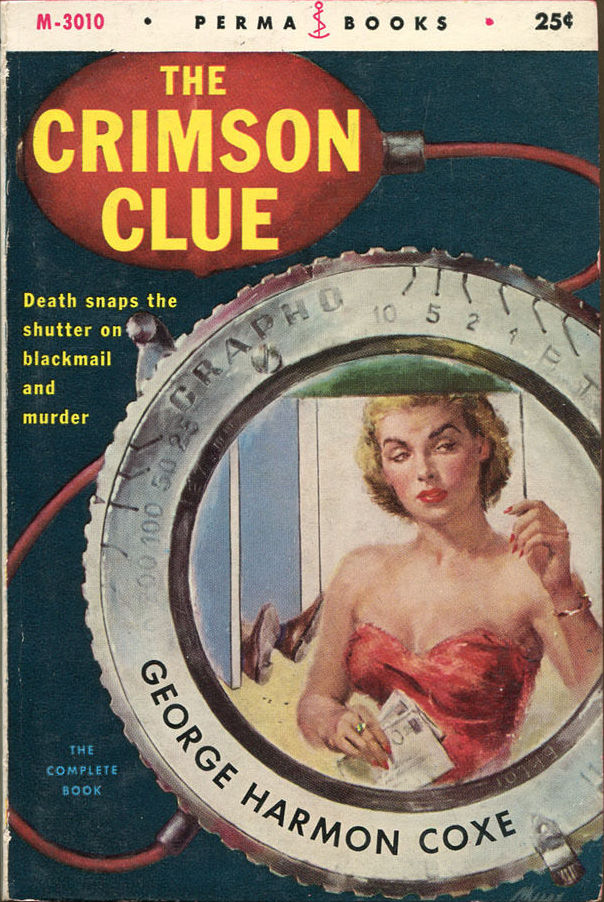 It had been a long, long stretch of days since I’ve had a Cocktail Talk post from a tale by one of our pocket-book specialists (in the 50s, that is), George Harmon Coxe – past hits here have covered his books The Groom Lay Dead and Murder in Havana. Those titles, along with the book we’re quoting here, The Crimson Clue, give you insight into where his reads roll: mysteries and crimes and all that good stuff. In The Crimson Clue, the hero is one I hadn’t seen before: a news photographer named Kent Murdock. I like the idea of a photographer shooting snaps and then solving crimes, and Kent’s a nice protagonist, and the book moves along at a persistent clip (as most pocketbooks do), has an intriguing cast (jazz musician, ex-cops, good cops, singer, rich folks doing bad things, and more), and a solid story. And, a fair amount of cocktailing and straight sipping, including the below, which asks an eternal question:

She watched him slip off his topcoat and put it on the arm of the divan, her head dipped, glance speculative. “Would you say it was too early for a drink?”

Murdock made an act out of looking at his watch and frowning over the proposition. When he looked at her she laughed.

She started for the kitchen and he asked if he could help and she said no. “On this kind of a drink,” she said, “no-body needs help. Sit down, will you? Park. Make yourself comfortable.”

Tags: bourbon, Cocktail Talk, George Harmon Coxe, The Crimson Clue, Would you say it was too early for a drink?

My last post of a book from George Harmon Coxe was in 2008. Jaysus. I wonder how many drinks you’ve had since then? Who do you think’s had more, you, me, or Barack Obama? I only ask cause when that last post went up, it was August 26th, 2008, the same day he was nominated for Pres. Anyway, I digress. Much like that that last Cocktail Talk post way back when, this GHC (that’s what he wanted to be called after two rye shots) quote is from a book featuring mystery-solving photographer Kent Murdock. That sounds like a career path every kid should aspire to. This pocket-book is called Eye Witness, and in it Kent roughs up and gets roughed up, uncovers the clues, charms the ladies, and has a fair number of drinks. In the below quotes, it’s actually both the charms and the drinks:

She laughed aloud. The third sidecar had begun its work, and the reserve, the slight touch of haughtiness that had once marker her speech and manner, slide away. The flush that brushed her cheeks was becoming and her voice was more throaty and somewhat less cultivated.

Murdock asked Leone if she would have a brandy. She thought a B&B would be fine so he had the brandy. Only then, when the waiter took the other things away, was Murdock able to sit back and give his attention completely to his companion. ‘That was all right,’ he said. ‘Marvelous.’ She was watching him now, the faint flush in her cheeks giving her a new radiance that was attractive and promising. The cocktails had apparently done their work well for she seemed relaxed and at ease, content; it seemed to leave the next move up to him.