Our third and last Mr. Pinkerton Goes to Scotland Yard Cocktail Talk (don’t miss, I tell you, don’t miss Part I and Part II, to learn more about the book and all such) shows the dangers of having Champagne cocktails after going to the movies! Very dangerous. And is also fun in a sort-of overly-dramatic way that reminds me of old motions pictures somewhat! With it, we say goodbye to little Mr. Pinkerton, for now, at least!

She laughed as if it weren’t really funny, but there it was.

“Monty and I had a Champagne cocktail or two at a club after the picture and decided we’d do that to Hugh, and then he’d see he was losing me and he’d say “I can’t let you go, you are mine,” and then it wouldn’t matter so much about his mother. Well, we did. We announced to Auntie and the Ripleys that we’d come to an understanding, and . . .  and  . . . 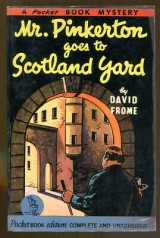 Ah, Mr. Pinkerton. Not a member of the celebrated detective agency at all, but a portly British chap (and yes, this is one of those occasion where “chap” is necessary) who falls into a humdinger of a mystery out of a combination of chance and boredom. That is, though on the outside it looks harmless, a deadly combination. I, myself, have gotten into mischief through it (though never coming close to a Scotland Yard-worthy entanglement). And you know what much of this mystery hinges on (well, really, how could you, unless you’ve read the book, and as it’s fairly obscure I’m guessing you haven’t)? A cocktail party where they bring out one of those “new-fangled American contraptions for mixing spirits.” I’m guessing they mean a cocktail shaker, but they aren’t that new-fangled, are they? Maybe it was an invention I don’t even know about? For shame, if so.

Mr. Paget had brought along with him one of the new-fangled American contraptions for mixing spirits, and he, Linda Darrell, and Hugh Ripley had brought some mint from the garden, sent Gaskins to the fish monger’s for six pennyworth of ice, and mixed it up with lemon juice. They made what they call a cocktail out of it.