What I’m Drinking: The Fountain of Fantastic Flora

Listen, you can disagree and I won’t budge (I also won’t get up all in your face about it, cause that kind of discourse should be saved for fools of the worst order, of which sadly there are many): Washington has the best distillers distilling. Am I a local nerd? You betcha. But they just keep making tasty things in bottles, and I keep tasting them and being happy. You should come out here and do some tasting (and buying, to help the cause) and be happy too. Recently, I put two of our newer releases together, and the end result also made me awfully happy. It started with Westland Distillery’s Garrayana 2|1. The first version won “Best American Single Malt” last year, and this will win plenty of awards, too. It’s aged in casks made from Garry Oak (Quercus garryana), a native oak only growing up here in the Pacific Northwest, and admittedly a limited-edition (get it while you can). It has a molasses, smoke, berry, citrus flavor. And goes remarkably well with another new-ish release, Salish Sea Organic Liqueur’s Honeybush liqueur. Honeybush is an herb out of South Africa that is usually used to make tea, but here it’s crafted into a liqueur that is super tasty, with a smoky honey flavor on the front end, and a fruity ending. It goes well with whiskey, as evidenced here. 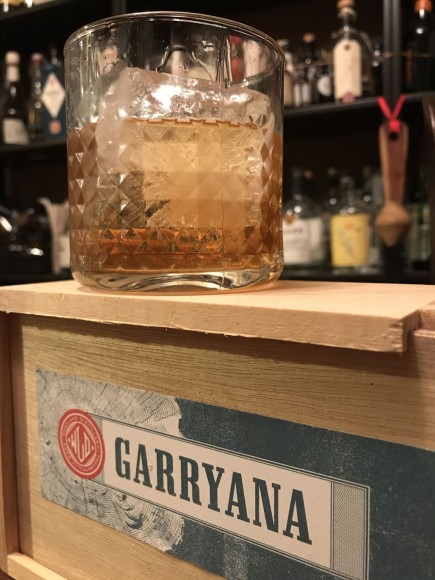 The Fountain of Fantastic Flora

1. Filling a mixing glass or cocktail shaker halfway full with cracked ice. Add our two Washington delights. Stir, but not too long.

2. Add a big ice cube to an Old Fashioned or other comparable glass. Strain the flora (in liquid form) over the ice cube.

I know, I  know, it’s the middle of August, hottest month of the year for most of us stateside, and so for many not perhaps the right time of year for a whiskey forward (very so, classically so) cocktail. These folks think that this should be a winter, or maybe fall choice, and they in some ways are right. But in other ways, they’re wrong. Exhibit A way: when you’ve received an absolutely choice bottle of single malt whiskey in the mail and decide you must have it in a classic drink. This, friends, is that exhibit. Or story. Or some such.

Let’s back up. Recently (and yeah, don’t hate me cause I’m lucky like this), I received a bottle of Paul John Brilliance single malt whiskey. An Indian – maybe the Indian – single malt, it’s made from ingredients, including a special six-row barley, grown at Himalayan foothills, and aged for five years in the tropics of Goa, India. This tropical climate makes for a fast maturation, in American white oak. The end result has won awards all over the world already, but just recently become available here. It’s a very distinctive whiskey, one that, by all rights, you should sip solo and let the demerara and barley fragrance tempt you and the spice and vanilla taste and intriguing cocoa finish with just a hint of orange linger (maybe a splash of water or a single ice cube for the second glass, just to see how it goes).

But, if you’re me (and of course you aren’t, cause that would be an existential pickle that would be, oh, too much to go into now) or like me, you can’t stop at that, even with a whiskey of this level. No, you have to try it in a cocktail. And now I’ve gotten a little weird with pronouns. Let’s stop that. I decided on the Rob Roy, one of the legendary Scotch cocktails. A single malt and a Scotch are of course, at least cousins, maybe siblings, in the grand scheme of things. And I wanted a cocktail that would really let the Brilliance flavors come alive, and provide some proper cocktail partners – here, the otherworldly Carpano Antica vermouth, and Angostura. The end result is dreamy. Any time of year. 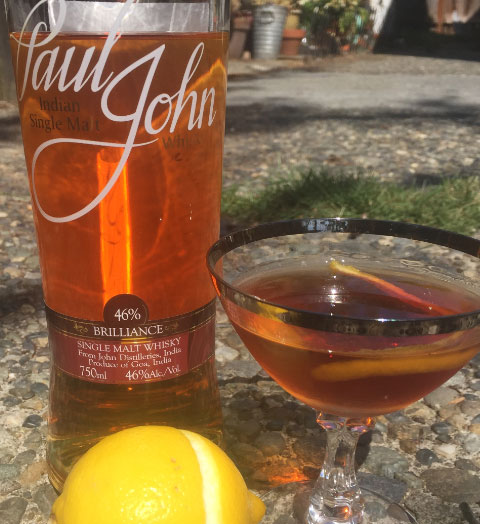 If you live in Washington State, you (like me) should feel pretty happy about the distillery explosion over the last few years, cause it’s delivering a host of dandy local spirits and liqueurs. The list includes a number of single malt whiskies, and recently I was lucky enough to talk to a bunch of distillers making said whiskey, and write about it for Seattle magazine. And now I’m passing that luck on to you, since the Washington State Distillers Embrace American Single Malt Whiskey article (and a few single-malt picks) is just a click away.