I recently had a wonderfully wonderful (if I can say so in all humbleness, which I think I just did) drink on the old Spiked Punch called Boldness Be My Friend, which featured not one, not two, but three lesser-known (in the States, at least, and other countries outside the one they were birthed in, at least, and maybe even there) liquid lovelies from Italy. If you haven’t seen that, check it out, yo! Or, it Italian, dai un’occhiata a yo! And now that you’re back, think about the simplicity and simple pleasure of a good vermouth and tonic. The gin and tonic, of course, is more well known, but a good vermouth and tonic is in need of more recognition. With the right vermouth, it’s a flavorful, refreshing, fruity, herb-y, treat that more sippers should savor slowly. I’m sad I haven’t yet managed to track down the distillery where Ippocrasso vermouth is made, in Gubbio (a memorable Umbrian town to visit, by the by), but the vermouth itself is singular, both in Boldness Be My Friend in a V&T. As mentioned in the other recipe, this vermouth is built on a base of Cantina Donini red wine (a memorable winery, in Verna, Italy), and has a bold fruitiness, with a delicate overall persona that’s just right for matching with tonic on a sunny late afternoon or early evening, or, if you’re feeling it, even into the evening as it goes along. I suggest a lemon twist as the garnish, by the way. The tartness of the lemon oil plays perfectly with the vermouth and tonic. Try it, and tell me I’m right. 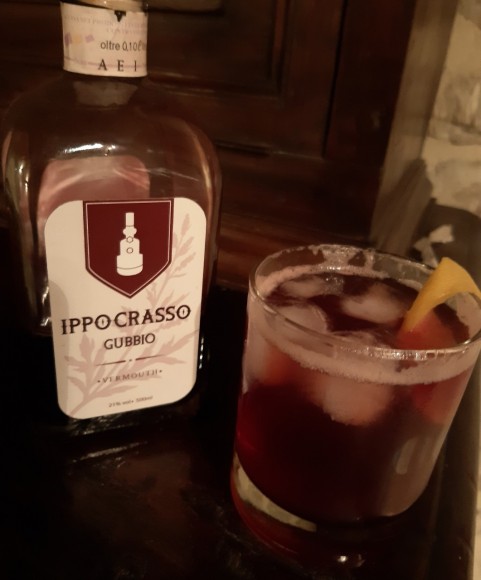 1. Fill a highball or comparable glass three quarters full with ice cubes. Add the vermouth, and then the tonic. Stir.

2. Squeeze the twist over the glass, and then drop it in.