As we wind our way into the final Some Slips Don’t Show Cocktail Talk (by the way: love the book cover here!), we find ourselves back at a situation touched on briefly in the book’s Cocktail Talk Part I (don’t miss Part II, either), where the real star of the series, detective Donald Lam (don’t tell his partner Bertha Cool I said he was the star, though), is getting cuddlier with one of the murder suspects in this here tale. And, as happens in the books (written by Erle Stanley Gardner writing as A.A. Fair), this cuddling, or prelude to cuddling, happens over drinks. Doubles, even.

A waiter came over and she ordered a double Manhattan.

“Bring him a double, she said, smiling at the waiter. “I don’t want to get ahead of him.”

The waiter nodded and withdrew.

We nibbled pretzels and did a little verbal sparring until the waiter came back with the Manhattans. They were both doubles. 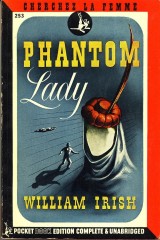 Our final Fredric Brown cocktail talk (in this run at least) comes from a story called “The Wench Is Dead,” which was later expanded into a novel. It’s about a genial drunk (who used to be high society), and murder, of course! And mishaps, and, as you’ll see below, Manhattans. Be sure to check out Part I and Part II to expand your Brown-ing. You’ll be happy you did.

‘Let’s drink our drink and then I’ve got a room around the corner. I registered double so it’ll be safe for us to go there and talk a while.’

The bartender had mixed her Manhattan and was pouring it. I ordered a refill on my whisky-high. Why not? It was going to be my last drink for a long while. The wagon from here on in, even after I got back to Chicago for at least a few weeks, until I was sure the stuff couldn’t get me, until I was sure I could do normal social drinking without letting it start me off.

It’s nice to know that the classics were full of Cocktail Talk. And nice to know that I’m still tappng into those great books, the Compleat Imbibers, those British compendiums of drink, wine, glassware, poetry, and so much more that everyone should pick up if they ever get a chance. If you don’t get a chance, well, read this quote:

Drinkers, such as Horace, were regularly mentioned in the New Year’s Honours. Indeed, Horace’s great ode on the defeat of Cleopatra begins, symbolically, with the words ‘Nunc est bibendum’: ‘Now for a drink.’ It is as if some patriotic American poet, the late Robert Frost perhaps, were to have celebrated the annihilation of an infinitely seductive female Mao tse Tung by demanding a Manhattan.

It’s Friday! Which means you should be thinking kick-up-my-heels and not clean-up-my-kitchen. But, but, but, with work schedules that are so packed, and weekdays that don’t seem to have a stitch of free time, often the weekends end up being a time to only shepherd the house back from chaos and into shape for the next week. Well, here’s an idea–track down a copy of Phyllis Diller’s Housekeeping Hints and get some advice on how to keep a house clean with minimal effort. Or, no effort at all. Cause Madam Diller is much more about the yuks than the sweeps, being a famous comedian from back a-ways. So, the book is full of suggestions like, “leave your sink full of dirty dishes. It’s a good way to cover up the dirty sink.” Which are perfect for Friday, when you should be thinking young, wild, and free and not detergent, elbow grease, and bleach. She also talks a lot about her penny-grasping husband Fang, which leads to the below line, which I love for some odd reason, and which ties the book in to the booze blog.

When we have guests, he puts a cherry in a glass of beer and calls it a Manhattan. 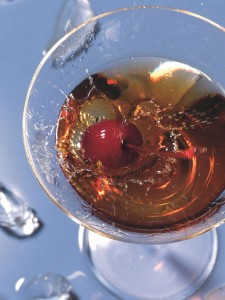 Hello dear readers. For those of you not living in Seattle or visiting in the next few days, feel free to walk away from this post right now (I mean walk away, too—I expect you to leave the computer on with this site up so the drunken elves that live in your house can read this). For those in Seattle, I’m sorry this is a little last minute, but there’s still time to clear your calendar so you can go to the Manhattan Experience contest (sponsored by Woodford Reserve bourbon and Esquire Magazine) this Monday, November 7th, at the Columbia Tower Club’s Columbia Room at 701 Fifth Avenue, downtown Seattle. You do have to register first (though it’s free!) at www.wellcraftedmanhattan.com. They’ll be a host of local and local-ish (all from in-state, mind you, if not in city) bartenders (well, a small host of six I think) making their updated takes on the mighty Manhattan. Does the Manhattan need an updated take? No. But, is it nice to have a bunch of drinks made in the spirit of the Manhattan? Yes. And is it even more fun if I get to judge which one is best? Double yes. And yes, I am one of the judges, which means I’ll get to spout off to someone about why the Manhattan is the Dark Knight of drinks, and my whole DC-cosmology-into-drinks theory. Which is always nice. But it’ll be nice if you’re there. So, come on by. But leave the drunken elves at home.

Sometimes, even in a book (or comic book) you’re not especially fond of (or, haven’t grown fond of yet, because some books and comics, like cats, sneak up on you. At first, you’re all “take-it-or-leave-it” and then all-of-a-sudden you can’t put the book or comic or cat down), a quote just jumps up and makes you happy. Or, at least, this happened to me this morning while I was reading the Leslie Ford book Washington Whispers Murder. I’ve picked up a couple of Mrs. (Miss? Ms? Madame?) Ford’s books because, well, I liked the covers. And I’m a sucker. Or, sucka, if you prefer. Though I haven’t read one yet I can honestly say I dig. But what I do dig is a pitcher of Manhattans made for me when I come over to visit. Which is why I liked this quote (and cause I know you like the same–the Manhattans, that is–I figured you might like the quote, too).

Her pale blue eyes widened inquiringly as she looked at the Manhattan pitcher he’d picked up. If he’d been a magician, and the Manhattan he poured then a chinchilla rabbit, and she a child of five, her eyes couldn’t have shone with greater or more enchanted wonder.