Recently (okay, it was like three months ago – but hey, time flies and all that), I was lucky enough to stop into the genius and amazing Seattle bar Rob Roy during their flurry of holiday amazement. Seriously, Scrooge would have come around twice as quick if he would have just stopped in the Rob Roy. One of the dandy drinks I have there was the Truffled Tom and Jerry, a long-time hit from their cocktail advent calendar. You can’t pick it up there now (cause it’s March!), but I did write the Truffled Tom and Jerry recipe up for Seattle magazine. So, party like it’s the holidays year round! 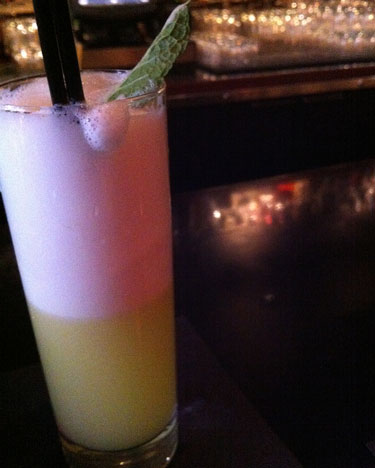 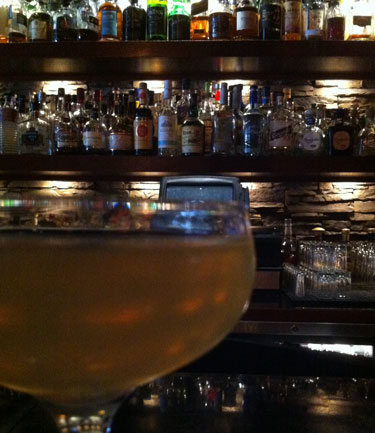 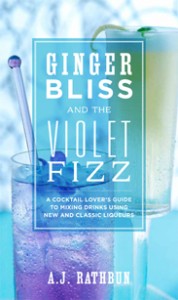 Okay, a warning: I’m going to talk about the following release party a lot. But can you blame me? In future mentions, I’ll probably provide some recipes and such from the book I’m about to mention, but for now, a drum roll for the down-and-dirty party details. But what is the party? It’s a release party for Ginger Bliss and the Violet Fizz: A Cocktail Lover’s Guide to Mixing Drinks Using New and Classic Liqueurs, my new book, and is an afternoon affair happening at the Rob Roy, 2332 2nd Avenue, Seattle, WA, on Saturday, October 8th, from 2 to 4 pm. I’ll be selling and signing books and genius bartender Andrew Bohrer (he of the Cask Strength blog) will be making Bitter Handshakes and Bruja Smashes (drinks of his featured in the book) and other drinks. It should be fun and a good excuse to have a good cocktail in the afternoon–so come on down, have that drink.

To woo you into stopping by, let me tell you that Ginger Bliss and Violet Fizz not only is bubbling over with liqueur info and history, party talk, and general boozy silliness, but features around 200 recipes broken into chapters arranged by flavor profile (A Liquid Citrus Circus, for example). The recipes range from lesser-known classics to more modern sure-to-be classics from top pro and home bartenders (many of whom I’ll mention more on this very blog as we get nearer the date). Need even more information? Well, check out the Ginger Bliss and Violet Fizz video. It’s time for you to join the GBVF Army!

Seattle’s finally in a patch of sunny, summery, weather, which means one thing to wife Nat and I—we go inside to a dark, shady bar to have some drinks. We don’t want any of that sun by golly. No sir-ee. Give us the jazzy (and I don’t mean bubbly, here, but more 1932 jazz den of iniquity) insides of any bar serving them up with either a sneaky grin or a snarl. Cause that happy sunshine is just too much.

Okay, the above paragraph was a kidder, kids. We love the Seattle sunshine. But we also love having cocktails at Seattle’s Rob Roy, which does have a small deck in the sun when it’s sunny, but hey, the seats outside aren’t as comfy. And the inside of the Rob Roy is so groovy, that we decided to sit inside even with sun outside recently, sipping our drinks with pals Rachel and Jackie, and talking to pal Andrew Bohrer (he of the muscular and mighty Cask Strength blog) when he wasn’t making us drinks. The drinks, by the by, we mostly delicious. To start, I had a Pimm’s Cup (which I like to have when in the midst of a patch of sunny days, even when I’m inside):

It was pretty darn good (if maybe a tad too mint-packed for me. But then again I’m vain, and always worrying about getting mint in my teeth). Nat started with one off the Happy Hour menu (she’s deal-oriented), the Oahu Gin Sling (which had gin, Cassis, Benedictine, lime, and soda):

Nice-y nice. For Nat’s second drink, she had Andrew make her an old favorite (of hers, but heck, it may be one of his favorites, too), the Diablo. Tequila, cassis, ginger ale and deliciousness. In this pic, the drink’s a bit blurry, but he, it gives you a sort-of paparazzi view of Rachel and Jackie (who also had nice drinks, but I’ve forgotten what they were. Sue me) as well as showing the sun for those who think I was kidding about Seattle and sunshine:

My next drink was an Andrew special, and for the life of me (honestly, if you held a gun to my classic cocktail book collection I could not remember) I can’t remember the name. But it was cracked ice, gin, a lovely vinegar, lemon, and I think something else. Maybe he’ll come by the ol’ Spiked Punch and let us know the name and if that was, actually the list of ingredients. But isn’t it a looker of a drink:

We had another round, but I put the camera down and focused on the conversation, as that’s more important than taking pics. I did, however, try to snap a snap of bar-tending Andrew actually behind the bar, working, but didn’t have any luck (he’s a blur back there). Instead, here is a final shot of his home-carved tool of ice destruction, his bartender’s Mjölnir if you will (and if you’re not afraid to admit you’re a geek and know what that means):

Be very careful when he’s swinging that hammer around. We don’t want any casualties at the bar.

Posted in: Bars, What I'm Drinking

I’ve hit up Ed McBain quotes before (a couple from his boozirific The Gutter and the Grave), and talked a bit more about him there, so I’m going to skip too much intro here, and just say that the cover for this book, Like Love, is very tantalizing, and the two quotes below are also very tantalizing, especially if you like Rob Roys and Martinis (hey, wait a minute, I like both of those!). The Rob Roy sadly isn’t mentioned very often in books outside of those tomes focused specifically on cocktails and cocktail lore, which made it even nicer to see it in this police procedural-y book. Also, the Martini isn’t really thought of (enough, anyway) as a romantic drink enough anymore, which made it even nicer to seen in in a romantic scene here.

I worked until about four-thirty. Howard came in and said he was knocking off, and would I like a drink. I said yes, I would. We went to the bar on the corner, it’s called Dinty’s. I had two Rob Roys, and then Howard and I walked to the subway. I went straight home.

He was glad to be away from Kling and away from the squad room. He was glad to be with Christine Maxwell who came in from the kitchen of her apartment carrying a tray with a Martini shaker and two Martini glasses. He watched her as she walked toward him. She had let her blond hair grow long since he’d first known her, and it hung loose around the oval of her face now, sleekly reflecting pin-point ticks of light from the fading sun that filtered through the window.