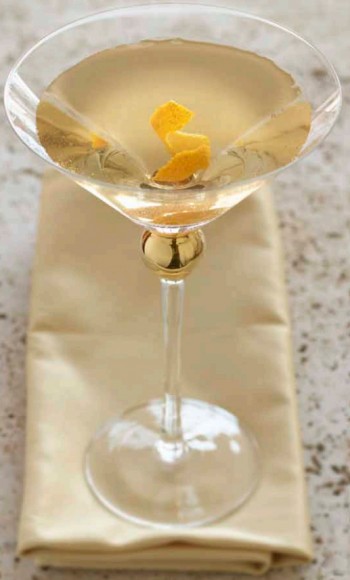 This lovely number is an ideal dance partner (or, to put it another way, drink) for the snazzy winter season that is upon us. Pretty, tasty, and pretty tasty, it two-steps gin and Lillet Blanc and then cuts in a small twirl of Angostura and orange. Just a swirling of light herbs and spice and citrus (oh, I’d go with a flavorful gin, here, one with a juniper smooch and not a juniper punch). While this December’s celebrations may not be at the scale as past years, there’s no reason not to enjoy a drink this fine no matter what the celebration entails. You deserve both it and a Great Secret. Really, you do!

Great Secret, as featured in Ginger Bliss and the Violet Fizz but originally, I found it in Patrick Gavin Duffy’s The Official Mixer’s Manual (the Alta 1934 version).

Orange slice, for garnish (optional, used instead of above twist)

2. Strain into a cocktail glass. Twist the twist over the glass and then drop it in.

As said in the “Goldfish” Cocktail Talk Part I, this particular Raymond Chandler story (from the Trouble Is My Business and Other Stories collection, and also don’t miss the “Trouble Is My Business” Part I and Part II Cocktail Talks, and for that matter, don’t miss other past Raymond Chandler Cocktail Talks) winds its way eventually up the coast all the way to Seattle, and so is nearly automatically near-and-dear to me. But it starts down the coast a ways, and also starts a little rough for one character (that’s your warning – the below quote is a little, oh, violent at the beginning), but then heads to Brooklyn. With Brooklyn Scotch, which, I have to admit, I’ve never heard of! So, now I’m very curious, and hoping the below makes you curious, too, and that curiosity leads to some Brooklyn Scotch history.

I went back to Kathy Home’s kitchen and found a pint of Brooklyn Scotch in the cooler. I used some of it and breathed deeply for a little while and looked out over the vacant lots. There was a narrow cement walk behind the house and green wooden steps down to the street. 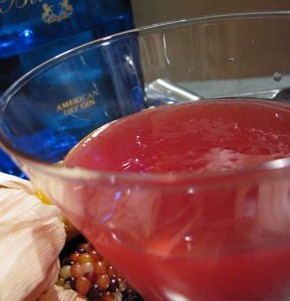 No matter what the world throws at you, or has thrown, I hope that you’ve still had some sort-of Thanksgiving (if you’re someone who celebrates such holiday), with some scrumptious food, and that you’ve perhaps stuffed yourself some, and have some leftovers, specifically some leftover cranberry sauce (or some brand-new cranberry sauce, if you want to just get fresh for your day-after-Thanksgiving drink), so you can pour yourself the classic day-after-stuffing-and-mashed-potato cocktail: The Gizmo.

2. Strain through a fine strainer into a cocktail glass. Drink up, Thanksgiving-style.

We’re still taking our fall tour along Raymond Chandler lane (don’t miss the “Trouble Is My Business” Part I and Part II Cocktail Talks), with Raymond Chandler of course, and have now made it to Seattle – which, coincidentally, is where I tend to sometimes hang my hat. So, as you can imagine, when I read the story “Goldfish,” in the book Trouble Is My Business and Other Stories, and Chandler’s PI Philip Marlowe ended up heading to Seattle, WA, well, I was tickled. And then they drank apple brandy! And then fish, and before that a mystery long-told, and I won’t want to say anymore cause you need to read the story – if I haven’t sold it, this quote will.

“Too early for apple brandy, ain’t it?” he whispered.

I told him how wrong he was. He went away again and came back with glasses and a quart of clear amber fluid. He sat down with me and poured. A rich baritone voice in the kitchen was singing “Chloe,” over the sizzling.

We clinked glasses and drank and waited for the heat to crawl up our spines.

“From Seattle maybe? That’s a nice piece of goods you got on.”

You know, 2020 hasn’t been overly-packed with good days. There have been some, I’m sure and I’m hoping, for everyone, some big-ish good days, and some small-ish good days, even within it all. I had one recently when some bubbly showed up here, which made the day more, well, bubbly. It was also bubby from Italy (you know I love Italy, right?), specifically Trentodoc sparkling wine – Trentodoc being from the Trentino region, which is in the far north of Italy, a mountain-alp-y region, one which also has some Mediterranean-ness on the lower slopes. I’ll admit that’s not the Italian area I know best, but after tasting the sparkling wine from there, I need to know more! Made in the Meted Classico, or classic method, Trentodoc sparklers are also made from picked-by-hands Trentino grapes. Sounds yummy, right? But the proof is in the bottle, as the saying goes, and the one I’m popping off now is Maso Martis Extra Brut Rose.

Starting with its pale pink-y coloring, and enticing effervescence, it’s a wine you’ll want to drink as you pour – which is what you want, right? The taste (pino nero grapes, if you’re interested) has a berry-centric-ness, raspberries, strawberries, and then some currants, with a few delicate herbal notes, too, and a creamy nature ideal for a sunny day, a date night around the appetizer course, or, really, almost anytime. It’s also a swell base for cocktails. Well, you wouldn’t think I wouldn’t try it in a cocktail, right? I do so love bubble mixes, and with a flavorsome rose like this, I had to see how it’d play with others. Starting with another delicious number (and by some crazy occurrence also showed on the porch), but from closer to US home: Clear Creek Pear brandy. Made with Bartlett pears grown in OR (where Clear Creek is), it has a phenomenal pear nature, from the small to the lingering pear echoes, while still maintaining a warming brandy undercurrent. Then, I traveled back to Italy (to help the wine feel at home), with bitter and beautiful classic Campari – which not only adds layers of taste, but a rich redness, which is further underlined by our last ingredient, homemade grenadine. Altogether, what a drink! Refreshing but bursting with delights, and one the showcases and perfectly utilizes the wine and brandy. Dive in. 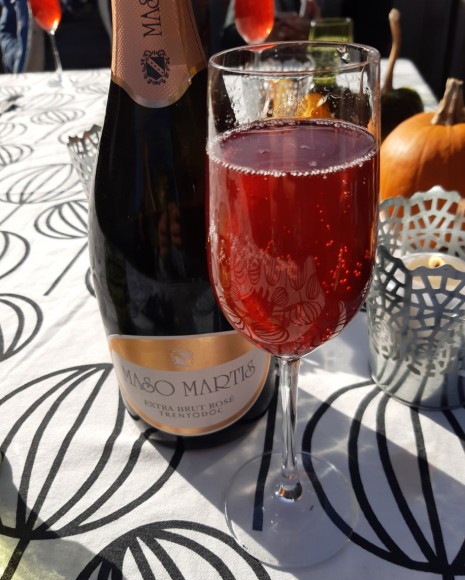 2. Strain the mix from Step 1 into a Champagne flute or comparable glass. Top with the bubbly. Stir carefully to combine. Enjoy. 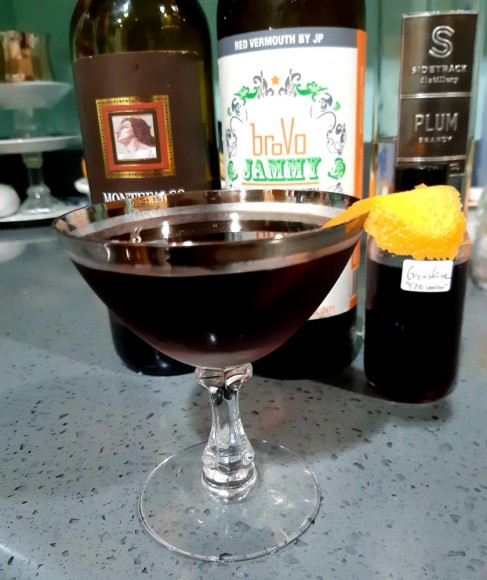 Cocktail Talk: Trouble is My Business

He’s been relentlessly imitated (poorly, in the main), some dated by the years, and translated much in language and form, but somedays, you just get the urge to read a little of the real Raymond Chandler and slip into the gumshoe world of Philip Marlowe. At least I do! And recently I did take said slip and slipped into a few stories staring such and written by such. I’m not sure much intro is needed – if you don’t know Chandler, then let me say there’s not much I can say that hasn’t been said better by others, or even turned into a film that does the same. Let me just say that the book I picked up (I have pretty much the whole hard-boiled batch) is a story collection headlined by the story “Trouble is My Business,” and the below quote is from the same story, and is about talking and drinking Scotch, and that you should read past Raymond Chandler Cocktail Talks.

“She laughed disinterestedly and I slid past the end of her cigarette into a long rather narrow room with plenty of nice furniture, plenty of windows, plenty of drapes, plenty of everything. A fire blazed behind a screen, a big log on top of a gas teaser. There was a silk Oriental rug in front of a nice rose davenport in front of the nice fire, and beside that there was Scotch and swish on a tabouret, ice in a bucket, everything to make a man feel at home.

“You’d better have a drink,” she said. “You probably can’t talk without a glass in your hand.”

I sat down and reached for the Scotch. The girl sat in a deep chair and crossed her knees.