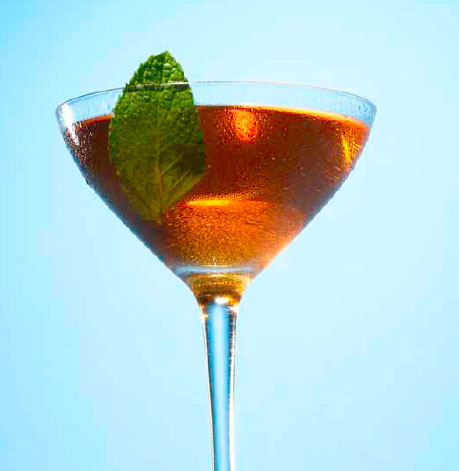 This is sort-of like a Julep in some ways, and like a Smash, and probably identically close to another classic recipes that use a booze, sweetening, crushed ice, and mint that I’m forgetting at this moment. None of that bothers me (does it bother you? Perhaps you’re at the wrong blog?), as the end result no matter what is a super refreshing, slightly spirituous, a wee bit sweet, flavorful icy drink that will make your summer parties sing. It can take some arm power to bust up ice into crushed ice, but you know what? I think you’re tough enough. And as mentioned, the end result is, well, smashing. 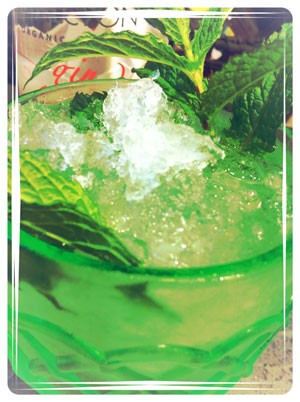 1-1/2 ounces gin (I used Bluewater Halcyon organic gin, and it was perfect)

1. Add the mint leaves and the simple syrup to a cocktail shaker. Muddle well.

2. Fill the shaker halfway full with ice cubes. Add the gin and the curaçao to the shaker. Shake well.

3. Fill a goblet or other snazzy glass with the cracked or crushed ice (this is a summer frothy delight, so pack that ice in there).

4. Strain the goods over the ice. Garnish with some mint sprigs. Put your feet up. Drink up.

PS: If you don’t think “Summerjulashation” is the best name for a summer drink ever, well, you suck. 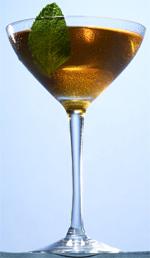 “Me & Mint” sorta sounds like a kids book, where you learn about life in a very colorful manner. Mint in that book is either an older relative or a sick friend, or maybe a dog that’s not friendly at first, or a monkey that eats your baseball cards. In a very other sense, it’s one of my favorite herbs, and one that (luckily) is usually available, and so, so delectable in drinks. It’s also profiled in this week’s iSpice column on the Washington Post site, following either the first link in this sentence or this link. In that column, I rhapsodize a bit about mint, along with some others, and also talk about how to use it in drinks (and no, I’m not going to tell you here what I said there–that’s not what the interweb is about, people). They also have my recipe for the Iollas’ Itch in the column, which is from my new book Dark Spirits, a book I’m gonna write more about soon. Here’s the recipe (though this doesn’t mean you shouldn’t click to the column, just that you should have a drink while reading it).

PS: Happy Friday to you, too.