I do a monthly column (along with various other things) for Seattle magazine (sure, you can be jealous), and until recently it was called Bar Hop, and had me chatting about a single new bar in the wondrous city I live within. But now it’s changed up a little, still a single bar, but with the focus lighting a little more on a single cocktail within said bar – and it’s not just new bars anymore, either, and is called (for now, at least) the Bar Method. And for the first one, I visited one of my favorite Emerald City bars of all, Liberty, which is about to celebrate its 10th anniversary! Amiable bartender Laura Bishop was my shaker, and made me a delicious wine cocktail called the Red October. But heck, don’t let me ramble, go read the article now.

What I’m Drinking: The Blue Train

There’s another drink also called The Blue Train (as happens, cause people are creating drinks all the time. Like ten were created as I typed “ten”), or the Blue Train Special, which shakes together 1-1/2 ounces brandy and 1 ounce fresh pineapple juice over ice, and then tops it with Cap Classique or other sparkling wine and a pineapple chunk in a flute glass. This is not that Blue Train. The Blue Train is in Wine Cocktails. This one is in Ginger Bliss and the Violet Fizz. Both drinks are awesome. This just happens to be the one I’m drinking today. But tomorrow? Who knows? 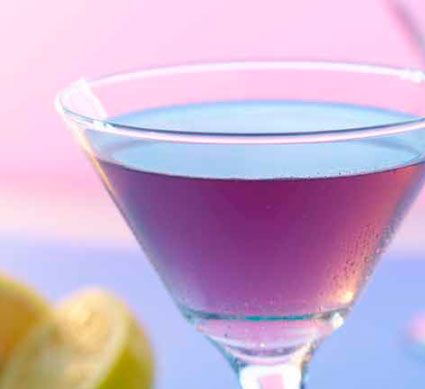 What I’m Drinking: The Lord Charles

This regal number is going to make the transition from summer to fall an easier one. First off, it could, honestly, simply, be consumed in summer and loved by all good countrymen. However, it has enough of a presence to not be all flighty as some summer drinks. Next, it’s called the Lord Charles, and darnit, that means it’s a bit serious like fall. On the flip side of that, remember that Lord Charles was also the name of a famous ventriloquist dummy, so a bit silly as well. See how it straddles the line without fear? With one, or two or three, of these in hand, you’ll move from season to season without a hitch. This recipe’s from Wine Cocktails by the way (a book I suppose you have—unless you’re square).

2. Fill a highball glass three-quarters full with ice cubes. Strain the Malbec mixture over the ice cubes. Fill the glass with club soda, almost to the rim.

3. Twist a lemon twist over the each glass and drop it in. Stir briefly with a scepter and serve.

It’s summertime (still—honest) and the living is wine cocktails-y. At least it should be cause wine cocktail are refreshing, and un-snooty, and fun, and delicious, and all that. And recently, as if me saying it aloud and in digital form wasn’t enough, I did a little interview with Woman’s World magazine, so it’s in print. And print is forever. So, pick up the most recent issue of said magazine. I also have the page with me here below (but the whole issue is fun, naturally), which has some wine cocktails talk, two recipes from the book Wine Cocktails, notes about how wine and wine cocktails are healthy (including protecting breasts, which I’m all for and which is just another reason why cocktails are the definition of awesome), and something about Ladybug Bling–which can’t be bad. So, read up: 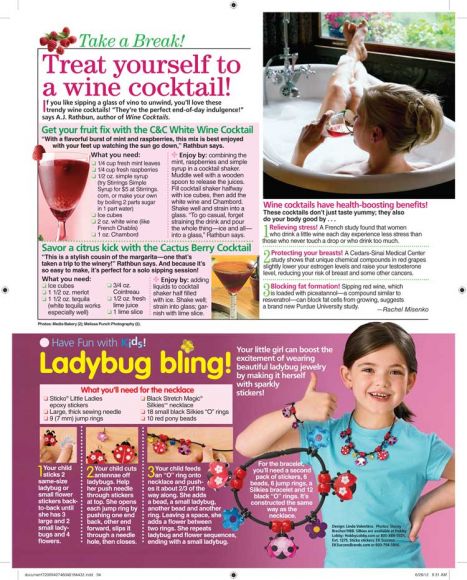 At my wonderful Locatails class last weekend at the wonderful Pantry at Delancey, one of the wonderful assistants (there was a lot of wonderful last weekend) asked me in passing about drinks made using rosé. I was going to round a few up for her, then people started coming in, I started talking, and somewhat forgot. Until now, when looking at the weather and realizing that we might, actually, be in for some more sun this week in Seattle. And when the sun’s out, a light-but-interesting drink like the Rosé Squirt is in (said drink from Wine Cocktails doncha know). So, now, I’m belatedly answering the question from last weekend and getting a wonderful drink on. 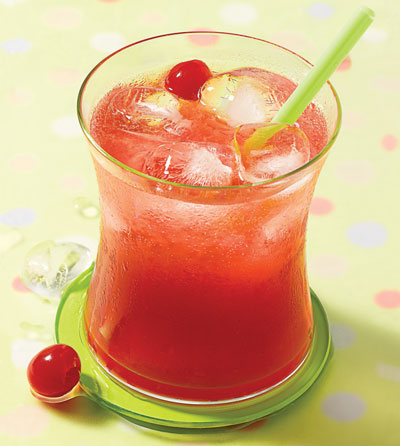 What I’m Drinking: The Italian Spritz 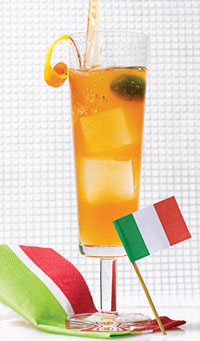 This is another summer favorite featured in Wine Cocktails (following up the Cactus Berry below), a continental number that’ll go down in a lovely manner while you sit outside under the bright bright sun. It’s also a drink that can be enjoyed year round and is a standard (many would say the standard) in the pre-dinner hour, the apertivo hour, the time when Italians gather at the bar for snacks and a little imbibing. It has been known to cause some disagreement (not too heated mind you, but friendly disagreement) due to the garnish. Depending on where you’re at, you might get a green olive, an orange slice or twist, or something else altogether. I go for the orange slice, but am friends with many who go other routes. There’s no need for tempers during the hot months. In the spirit of this friendliness, this recipe is for two.

1. Add 1 or 2 ice cubes to two flute glasses (skip this if your Prosecco is super chilly). Add the Aperol.

2. Fill the glasses with the prosecco and stir gently. Garnish with the orange slice.